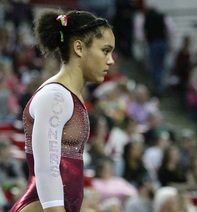 The 2016 season has come to a close, and there’s a good eight months until the 2017 season begins. But even with all that time until we finally get more NCAA gymnastics, it doesn’t mean we can’t starting making predictions. Looking at graduating seniors, incoming freshmen and transfers/deferrals, our panel of gymternet experts has analyzed which teams they think will be competing the final night of the season a year from now.

For the last predictions of the season, we brought back the old standbys: Lauren from The Gymternet, Spencer from The Balance Beam Situation, Casey — everyone’s favorite Bay Area blonde — and Elizabeth from NCAA Gym News.

Lauren
Winner: UCLA
Super Six: Oklahoma, Florida, Alabama, LSU, UCLA, UtahOklahoma is not done. They’ll have Brenna Dowell back, their fierce underclassmen will have more experience, and Maggie Nichols will enter as a freshmen with worlds – and maybe Olympic – experience. I’m all about it. Remember how Oklahoma got second place in 2013 and came back a year later with their “we’re number two” shirts as motivation and then shared that season’s title? That’ll be Florida next year. They lost Sloan, but they have one of THE most impressive freshman classes, one that will be noted for their style in addition to their skills.

Alabama will also be there. The perennial favorites will see a massive junior class rise to power while also bringing on some fabulous freshmen, including big name Madison Desch. LSU survived their own big senior cut between 2015 and 2016 and only loses a couple of lineup spots this year. They will also now have Ashleigh Gnat leading the way in what will probably be an explosive senior year, and bring in level 10 superstar Kennedi Edney in addition to British elite Ruby Harrold, who is hoping to make her country’s Olympic Games this summer. I also think (and hope) Stanford will find their way back, but think Utah could be a major challenge as they add Melissa Reinstadtler and world champion MyKayla Skinner to their roster.

But my favorite looking forward to 2017 is UCLA. They lost some great seniors, yes, but as awesome as they were, this incoming class is going to blow everyone’s minds. UCLA has three brilliant level tens with the Glenn twins and local kid Felicia Hano, three-time world champion and 2016 Olympic hopeful Madison Kocian, and then 2012 Olympic champion Kyla Ross, no big deal, who will enter her collegiate career refreshed after retiring from elite earlier this year. UCLA has been through a rebuilding period since their last title in 2010, and now that they’re finally getting back to their peak, this class has the potential to push them over the top.

Spencer
Winner: Oklahoma
Super Six: Oklahoma, Alabama, Florida, LSU, UCLA, CalIt’s almost impossible to express how badly I wanted to predict Centenary and UW-Stout for Super Six and then spend paragraph after paragraph coming up with really earnest reasons about how this is finally Stout’s time to shine, but seriousness ultimately prevailed. Mostly.

As most of us expected, Oklahoma, Alabama, Florida, and LSU pulled away from the pack at this year’s championship and cemented their places in the current Big Four. I don’t see any reason to break up the band at this point, and all four should continue challenging for the national title next season. Alabama and LSU will lose relatively few routines from their 2016 rosters, and with rising sophomores on both rosters who look likely to contribute more next year in addition to their freshman hauls, they’ll both expect not simply to continue on the same track but to improve for next season.

Oklahoma and Florida will be forced to jettison more significant routines from their 2016 lineups, but both have so many miles of star potential in their 2017 freshman classes that any serious regression from this season’s performances would be an unexpected disappointment. Florida has recruited an all-star team of second-tier elites in an effort to fill the Bridget Sloan-shaped hole in the gym wall that she made when she burst out of there à la the Kool-Aid man, and Oklahoma will casually add Maggie Nichols and Brenna Dowell to a roster that just won the championship. That’s why the Sooners remain my pick to win. That quality isn’t going anywhere. It’s just getting the Nichols treatment.

The freshman influx from Florida and Oklahoma is bested only by the veritable walk of fame that UCLA will add to the roster next season. With Kyla Ross, Madison Kocian, Felicia Hano, and a cast of thousands, the Bruins will need only some of those gymnasts to deliver in order to break back into the title-challenging group and become a much more secure pick to make Super Six, rather than the upset queens they were this season. Team with Kyla Ross = automatic favorite.

My last spot goes to Cal, largely because that would be fun and different, but it also makes some sense. Cal finished an impressive and unforeseen seventh this year and will return every single one of its lineup routines next season, providing the opportunity to bolster depth and improve on each event. So, is making the top six really that much of a reach?

Oklahoma is in a really good place for next season. They lost 8 Super Six routines, but have some talented freshman coming in. Also, Brenna Dowell. YES.  She will easily fill the hole Scaman leaves. They just need to make up a routine on each event to replace Kmeciak. If Maggie Nichols survives the olympic year, she is the clear choice to fill that role. They also have an MIA Lovan to fill in some spots and Marks can be very good once she gets things all ironed out. Overall, Oklahoma looks great going into next year and can be expected to defend their title.

LSU and Alabama lost only 4 routines from their Super Six lineups. This puts them in an excellent spot for next season and I fully expect them to improve upon this seasons scores.  LSU depended on alot of freshman routines this year, but with the confidence of this season under their belts, the Tigers will have a killer sophomore class to bring in the big numbers.  Alabama only used one freshman routine in Super Six! They will have so much experience next season. Their amazing junior and senior classes should lead them easily to the super six. Plus, I am super excited for Childers and Desch to join. They will be two big additions to this Alabama squad. Either of these two teams could be in the hunt to upset the Sooners, and I fully expect them to give OU a run for their money.

Florida is losing the Sloan factor, which is a big deal. She is the key ingredient that got them to that first title in 2013. That hole is going to be impossible to fill. However, Florida does have a big and talented freshman class coming in. Hundley, Gowey, Chant, and Baumann are all stellar recruits that can be giant additions to all events. The question is, will they be healthy? It’s always tough coming to NCAA after the olympic year, and I don’t think all these girls will be healthy enough to contribute. For that reason, I don’t think Florida will make enough gains to improve upon this year, or even match what they are losing in Sloan and Caquatto. It should be enough to make it to Super Six, but not to win a title.

UCLA is losing Danusia Francis and my heart is broken into 49358020 pieces. On the bright side, they have the depth on floor to replace all three seniors. UCLA had 11 different girls compete floor this season. Beam and Bars are the bigger concerns. Bars was a weak point for UCLA this year, but adding the world champion on that event to your roster will definitely help. UCLA’s bars lineup can quickly turn into an asset with a one two punch from Kocian and Ross. Hano will add some much needed difficulty to the vault lineup and will probably work into floor as well.  Let’s also not forget my Texas dream girl Toronjo. She will be back and blessing us with her perfect form. It’s good to be a Bruin fan. Finally.

Lastly, I can’t go through a whole post without making a crazy prediction. I honestly think Cal can make it into Super Six. In case you didn’t notice, they placed 7th this year. How many seniors do they lose? ZERO. Not to mention the 4 10.0 SV vaults they have coming in from freshmen. Also, Dana Ho and Serena Leong should be back from injury. Plus, they didn’t even use Toni Ann at this meet. Is it kinda crazy, sure. Is it totally possible, yes.

But as for the Super Six finalists, it’s going to be tough. Oklahoma is losing a group of phenomenal gymnasts. What are we going to do without Haley Scaman’s eyes on floor? But they’re getting back two gymnasts that basically make everything right with the world.

But it’ll be tough with UCLA and Florida basically bringing in national teams passing as their freshmen classes. Any team with Kyla Ross is going to do big things. Add on Madison Kocian, the Glenns and Felicia Hano and you have yourself a very nice little team right there, and that’s just first-timers. Florida is in a similar boat, losing Bridget Sloan, which is huge, but gaining Hundley, Baumann, Rachel Gowey and Maegan Chant isn’t too shabby.

I don’t see Alabama or LSU going anywhere either. They’re not losing much in terms of routines from seniors and have good routines waiting in the wings as well as standout freshmen coming in. It will continue to be a fight at the top.

I’m not sure what to do with my last spot. I’m temped to go with Cal for many of the same reasons those above me pointed out. The Bears finished seventh without Toni-Ann Williams and without routines from any seniors. So all logic says they should be stronger next season. But there’s Utah, too. Yeah, the Utes are losing a lot of great routines, but they were right in it at nationals until the beam bug bit. I see them being in the hunt as well because when is Utah never not in the nationals conversation. And don’t forget about Michigan. Not making it in 2016 was a fluke. And with strong freshmen coming in as well as Artz and Chiarelli back for one more season, I’m going with Michigan for my sixth team.

As for the winner, I really, really, really want to pick UCLA. The Bruins will have the talent to win. But I’ve learned in the past not to put too much on UCLA until you make sure everyone is settled into their bubblewrap casings and safely packed away until the last minute. So I’m going Oklahoma. Every if on paper the team isn’t No. 1, KJ Kindler always has a way of pulling every last drop of talent out of her gymnasts.