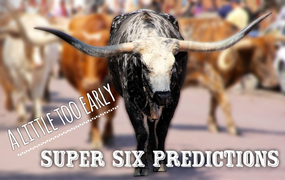 It’s regionals time, and we finally know which teams will be up for spots in each subdivision at the national championships. Things are a bit more clear now with regionals teams and seeding decided, but it’s still a little too early to predict the Super Six teams. So, as always, we’re doing it anyway.

Like before, we’ve brought in some of the gymternet’s most well-known personalities to take a look at how fall training went for teams and judge which teams might be competing the final night of the season and which might be taking home the top prize. Now to reintroduce you to our pickers… Lauren from The Gymternet, Spencer from The Balance Beam Situation and Elizabeth from NCAA Gym News.

And finally, if you’d like to play along, enter our 2016 NCAA gymnastics bracket challenge. You have until Friday at 7 p.m. ET to submit your picks. So without further ado, here are our “A Little Too Early Super Six Predictions”.

Lauren
Afternoon Semifinal: Florida, LSU, Georgia
Evening Semifinal: Oklahoma, Alabama, Utah
WINNER: OklahomaI don’t think my ideal Super Six has changed at all since last time around, even with the regional site selections…they can all make it in pretty much no problem, with the exception of Georgia, which I still have as my Super Six surprise. I am fully convinced Oklahoma will win. This pick has only gotten stronger and stronger each week watching them fully dominate. LSU, Florida, Alabama, and Utah should also be no-brainers if they hit in prelims. They’re all the leading teams at their respective regionals, and while anything can happen in prelims – ahem, LSU last year – I think something like that would be impossible to predict so realistically, my top five should absolutely make it in (though if one team does uncharacteristically implode in in prelims, I’m going with Florida on beam because I just have a weird spidey sense feeling about it…sorry Gators).

Georgia…okay, I’m not going to pretend that their nationals spot is secure. Oregon State can totally outscore them if beam becomes an issue, but you know what? Georgia isn’t imploding on beam anymore. Even when they have mistakes, they fight back and bam, their scores are still pretty solid (see: SECs). In fact, they’re SO GOOD on their other events that their score with counting a fall was basically the same as OSU’s PAC 12s score counting zero major mistakes. I don’t know. I really just believe in this team and maybe I’m wrong and Stanford will come in like “oops I did it again” as they always do. But my heart is so much with Georgia right now.

Spencer
Afternoon semifinal: Florida, LSU, Michigan
Evening semifinal: Oklahoma, Alabama, UCLA
WINNER: OklahomaIn the first batch of teams, Florida and LSU seem comfortably poised to advance to Super Six barring the kind of beam meltdown that sent LSU into an angry-DD-Breaux-interview spiral last year. Both are capable of scoring into the 197.5s even with a somewhat ragged performance, while that score would constitute a magical life-changing adventure for any of the other teams in the group.

The remaining spot should be a tremendous fight among Michigan, Georgia, and Auburn, and now that Michigan seems to have caught as case of Georgia’s bad-beam fever, Auburn is rising in my estimation and nearly snatched that last place. I still maintain, however, that Michigan’s superior scoring record across all the events should carry the Wolverines through without suffering a repeat of last year’s heartbreak.

In the second semifinal, I’ve finally broken down and given in to the siren song of the UCLA Bruins. I tried to resist all year, viewing the weaknesses of those vault and bars rotations as too significant to overcome at nationals, but a second-consecutive win over Utah at the Pac-12 Championship, marked most significantly by somehow outscoring the Utes on bars even with a fall, has tipped the balance. Up is down. Left is right. Also, we need to have an upset in here somewhere, even a small one.

UCLA can burn so brightly but can also look very uninspiring, while Utah’s asset is supposed to be superior depth and a lack of those same low points. At the Pac-12 Championship, however, Utah showed more troublesome low points because of beam, which must be addressed at regionals before a potential fourth showdown against UCLA at nationals. Four meetings in a single season. It’s almost like there aren’t other teams.

The battle to earn the final spot out of the evening semifinal is likely to come down to Utah and UCLA since Oklahoma and Alabama have shown in recent performances that they should be considered solid favorites, much like Florida and LSU in the previous session. Oklahoma has looked the most postseason-ready of any of the teams for the last month or so and would have to be knocked off that pedestal to lose favorite status, which hasn’t happened yet.

Elizabeth
Afternoon Semifinal: Florida, LSU, Michigan
​Evening Semifinal: Oklahoma, Alabama, UCLA
WINNER: OklahomaWe now know which subdivisions which regionals will go into to fight for a chance at the Super Six. While it mixes my previous Super Six predictions up a bit, it doesn’t completely rock the boat. Oklahoma is still my winner. Florida won SECs in a controversial fashion and Oklahoma dominated Big 12s. Yes, you can’t compare scoring, but I still feel like Oklahoma is the stronger team. We’ll know more after both team’s are away at Big 10 scoring venues for regionals.

Alabama also seems like a shoo-in, coming in a very close second to Florida at the conference championships and did it while still exploring depth in the lineups. LSU also looks like a good pick. The Tigers, despite finishing third at SECs, are still strong contenders as long as they don’t have another beam episode like in 2015.

As for the last two spots, I went back and forth between Michigan and Georgia and UCLA and Utah. I put Michigan above Georgia because when both hit, Michigan is the stronger team, in my opinion. However, if one misses or they both miss, all bets are off. The same goes for Utah. UCLA has already beaten Utah twice this year and I’m not convinced Utah can be 100 percent on beam, especially with Maddy Stover’s shoulder in doubt. UCLA is finally getting all of its main players back form injury and I think will make the finals as long as they keep those vault landings under control and bars in check. If Janay Honest keeps being gifted 9.95s, UCLA is in a good position.