We’re getting closer to RQS time, but until then, rankings are still based off averages. So we’re back with another round of power rankings for you all. This week we ranking what we believe are the top 15 teams in the country and categorize them into tiers based on characters from The Office. If you haven’t seen The Office, you really need to because you’re missing out. Let us know who you have in your top 15 and what Office characters you think they take after in the comments or on Twitter.

​If you want to view the official rankings, head on over to Road to Nationals.

Dwight Schrute
1. FloridaYou don’t think Florida’s the best team in the country right now? False. Everyone loved to pick on Dwight. Whether it was Jim pulling pranks on him, Michael making him do his laundry or people just messing with him in general, Dwight was an easy target. And just like Dwight, everyone loves to hate on Florida. No matter how not-a-10 Alex McMurtry’s bar routine was or how overscored the Gators’ 198 was, you can’t deny the team is the best in the country right now. But after everything, after all the pranks and jokes, Dwight still became manager in the end. And by the looks of it now, Florida’s not just going to be Runner Up to the National Champion in 2016. It’ll be the real deal. 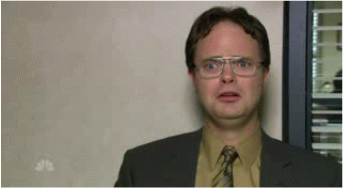 Michael Scott
2. OklahomaMichael was probably the best character on the show. Everything he said was hilarious. Likewise, everything Oklahoma does is pretty, pretty, pretty. Even when the team makes a mistake, it’s pretty. Think beautiful disaster. But Oklahoma finally wasn’t a disaster on any event and took “revenge” on LSU as it defeated the Tigers as well as the three other teams competing at Metroplex and establishing itself as a threat for the national championship. No matter how silly or ridiculous Michael was, he always got the job done.

Kevin Malone
3. AlabamaAlabama’s success this weekend was definitely overshadowed by Florida’s somewhat ridiculous and a whole lot outstanding performance. Kevin was often overshadowed on The Office too. Naturally funny, Kevin took a backseat to Michael, Dwight and Jim’s antics and often wasn’t as appreciated as the main characters on the show. And we all know what happens when we forget about Alabama. The Crimson Tide will just come rolling slowly along and sweep the SEC championship out from everyone’s noses. Fool us once, shame on you. Fool us twice shame on us. Fool us three times? We’re probably Kevin Malone.

Jim Halpert
4. Michigan
5. LSU
6. UCLAEveryone loves Jim. And for the most part, everyone loves these three teams. We were heartbroken when Pam turned Jim down in season two’s “Casino Night” just like we were sad when Michigan and LSU fell apart on beam this weekend and UCLA had a case of the “let’s fall on a skill we did in level 6” not once but TWICE on bars. Yeah, some things they do make us want to pull a Jim face at the camera, but for the most part, we’re enjoying the ride with them so far. They just need to make that leap to the next level: Dump Karen — er, 196s — and head straight for Pam.

Stanley Hudson
7. ArkansasArkansas right now is basically Stanley on Pretzel Day and Stanley when he just doesn’t care anymore and goes around giving people advice by telling them to shove it up their butt. Arkansas has now not only upset Alabama but come from behind to beat Auburn as well. The Razorbacks are looking like a serious candidate for the night session of SECs as well as a dark-horse shot at nationals. Just like Stanley, they’re saying, you can have your previous thoughts, shove them up your butt and watch us do things the way we want to do them.

Toby Flenderson
8. UtahWe always felt a bit bad for Toby on the show. No one ever really liked him and yet he stuck around time and time again. We’re not saying no one likes Utah, but we do feel bad for it at this point. Losing Kari Lee to season-ending injury is a huge blow. And we’re not sure how they’re going to recover from it in the long run.

Erin Hannon
9. Boise StateErin Hannon kind of came out of nowhere in season five and turned out to be one of the best characters on the show by the end of the series — one of the bright spots towards the end. And if any team has come out of nowhere this season, it’s been Boise State. Sitting in its highest ranking ever, the Broncos are killing it so far. We’ll just have to wait and see if they continue the success or fade out like too many TV shows do.

Kelly Kapoor
10. Georgia
11. Stanford
12. AuburnKelly was never all there. She was oblivious to her surroundings most of the time and was a bit of a ditz. But we loved her all the same. Like Kelly, Auburn, Georgia and Stanford aren’t all there. Yeah, Georgia finally hit five beam routines in one meet but we’re holding out to see if it can happen more than once in a row. Auburn has also had vault and beam troubles and don’t even get us started on Stanford’s floor. All of these teams have strengths, but they also have glaring weaknesses.

Creed Bratton
13. Denver
14. Nebraska
15. Oregon StateCreed wasn’t the best character on The Office, but he was always there to bring the comic relief. While each of these teams might not be the best in the country, they all have that one gymnast or two that brings light to the meet. Can you say Queen Nina McGee?