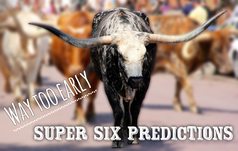 There are still 79 days until the 2016 NCAA gymnastics season officially gets underway and even longer until the NCAA national championships in Fort Worth, Texas, but that’s not stopping us from making some predictions. We’ve brought in some of the gymternet’s most well-known personalities, and over the course of the fall and season, we’ll be making periodic predictions for the 2016 Super Six, starting with way too early guesses today and continuing right up until the day before the national championships are set to get underway.

Let’s meet our predictors… Lauren from The Gymternet, Spencer from The Balance Beam Situation and Emily and Elizabeth from NCAA Gym News.

This is kind of my dream super six. Oklahoma gets the win because it’s about time for them to have a solo win. They had such an incredible season last year but then choked a little when it counted. I’ve already decided this won’t happen again, and no, I’m not biased in the slightest. Okay, I totally am. If they don’t do it, I think it’ll be LSU. They lost a lot of insanely good seniors but I think their freshmen are totally capable of huge things. Florida, meanwhile, needs a transition year with new head coach Jenny Rowland but they also have so much talent it wouldn’t be surprising to see them pull it off anyway.

As far as the other three? Stanford literally always makes it in. They could have the worst season ever, posting 194s and fielding only five athletes per event, and then they show up at nationals like “haha jk” and kill it. Bama always has a fierce season and a fierce nationals so they’re in, for sure, and then UCLA…I know they’ve broken a lot of hearts in these past few years but they only really lost one major player last year, so that combination of their seasoned upperclassmen and insanely talented freshmen will help them go far.

Hopefully we’ll see a little bit of a shakeup from the way things ended in April, if only to keep things interesting, but for the most part, the big girls remain the big girls. Florida is the easy selection for a 4th title in a row, a hydra of talent that loses Kytra Hunter only to grow Alicia Boren and Peyton Ernst in her place, but let’s break the monotony, shall we? Alabama has a large class of under-the-radar talents coming in to bolster a relatively young group that is yet to show its full quality and should be quite dangerous this year.

LSU will be the most exciting team to watch, but so much responsibility is heaped on the mega-talented freshmen to replace the small army of lost 9.9s, making the Tigers a wait-and-see team for now (as is Utah, but without the same crop of name-brand freshmen). Michigan was the surprise team of last year, ultimately very unlucky not to make Super Six, and with a roster this season capable of repeating that quality, the Wolverines are a solid sleeper.

Like, Lauren said, I think this will be Oklahoma’s year to finally get that championship all to itself. The Sooners have looked really strong in fall training so far and seem to have the difficulty to score well. Plus, it’s hard not to love a team that has the potential of putting up zero boring back handspring layout stepout series on beam and six 10.0 vaults. But Oklahoma will have Florida and LSU right behind. I don’t think Florida will experience the drop many are expecting with the loss of Faehn only because Bridget Sloan is still there. It’s like the Courtney Kupets Effect from Georgia’s glory years. As for LSU, at first you see what the Tigers lost in Rheagan Courville and Jessie Jordan and think the team’s in trouble. But then you look at the freshmen and think they’re capable of making up for the losses. It just can’t have another beamplosion during prelims.

But there’s so many strong teams. I think it’s finally Michigan’s year to make the finals. They should have done it last year, but were just edged out. I mean, how many teams can say they never counted a fall throughout the entire season? And from the looks of the Wolverine’s training videos from the fall, they’re looking stronger than ever. Then there’s Alabama. You can never count the Crimson Tide out. Last year I almost did and they went on to win their second SEC title in a row. It’s safe to say I’ve learned my lesson. I had so much trouble deciding my last team, but finally ended up with Utah. Finishing second last year surprised a lot of people, and I think losing Georgia Dabritz and Tory Wilson will hurt a lot. But when you think about it, Wilson didn’t compete at nationals and Dabritz didn’t have her best all around meet in prelims yet the team still made finals. If the newcomers can step it up, then I think they can make another run.

Every time I watch an Oklahoma update on social media, they just look like a team that’s going to win a national championship. I don’t have a reason more profound than that. They look great, and I think they deserve to win this year. Florida is obviously going to be a factor in the national championship equation for quite some time simply because of the names on its roster. The coaching change will might make things a little shaky at times this year, but honestly, Florida could probably not have a coach at all and it would still make Super Six. I do feel like Florida is going to be affected by the vault rule changes more than some of the other teams. I have this theory that Georgia is finally going to be good this year. The seniors are going to be incredible and the whole team has a tremendous amount of potential. This is majorly dependent on whether or not they learn how to hit beam when it matters. Alabama seems to always make it in, so why not again in 2016? I was a little hesitant to pick LSU at first because of how many great seniors they lost, but the freshmen should make up for it. And then I picked Stanford because they did so well at NCAAs last year, I feel like they’ll make it again.

So who do you think will win the 2016 title? Sound off below.