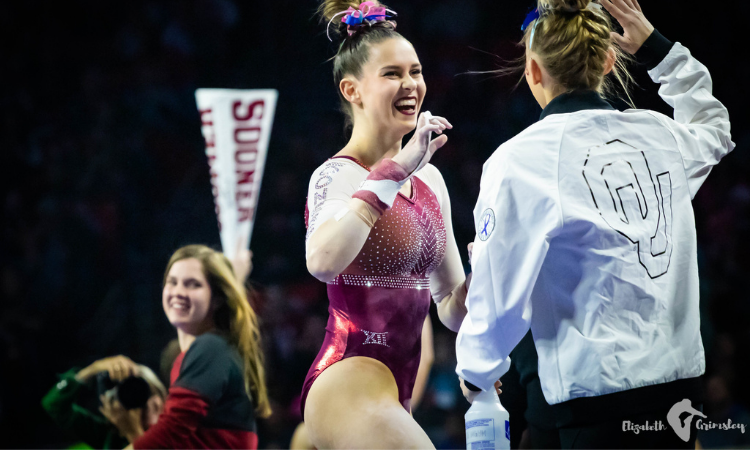 When watching college gymnastics, it’s easy to see what’s on the surface–the double layouts, the sticks, the pointed feet. We all hear the elation following a hit routine, even the awkward “oohs” of the crowd after a fall. The still frames of post-stick celebrations are encapsulated forever. What we don’t notice, or often think about, are the cast of characters necessary to make Friday Night Heights possible. What we don’t pick up on are the people who frantically shove mats into place, strategically hand-wash every competition leo and are tasked with taking springboards through TSA. Enough time has passed without this group of people getting the recognition they deserve. Today, we recognize gymnastics managers for all they do to make the best season, gymnastics season, a reality.

In my time at Centenary, we had an on-going joke that if you pushed the mat or moved the board for an All-American, you were an All-American too. We laughed about it, but there’s a hidden truth within it. If there’s one thing I know about gymnasts, it’s that we’re particular. That’s how athletes get 10.0s—attention to detail. Particular athletes require meticulous people around them to help them be successful.

Just think about the level of trust that goes into flying through the air while having no control over what you will land on if you miss. It’s hard for someone who’s never actually competed to understand just how hard those competition mats are, but I’ll try to paint the picture. I’m going to stick with a bar example, since that was always my favorite event. The average set of bar competition mats are 12 cm, or 4.72 inches thick. Occasionally another four-incher is on top, neither one has much give. Even so, gymnasts can fall from upward of 12 to 16 feet in the air at full speed onto a surface that is roughly 9 inches from concrete. If we’re lucky, hardwood. With that being said, we live and die by the individual who is pushing in an extra four- or eight-incher for release moves. We’re trained when we miss a regrasp to land flat on our stomachs on the mat. You might imagine how things could quickly go amiss if the ground is a little bit further away than expected, or we land half on the eight-incher and half off, feet in the air, face on the floor. Sounds like the recipe for a concussion, among other things, if you ask me.

Managers are the lifesavers that step up to the job. They’re at every practice, every competition, memorizing the way each gymnast likes her mat and board positioned. They strive for the perfect timing. Smoothly slide the eight in, yank it out, reposition the dismount mat at just the right distance so the athlete won’t clip her feet. All within the matter of two seconds flat—maybe less. Oklahoma senior manager Reid Sindelar highlighted the amount of pressure that comes with pushing mats for potential national champions. “It’s definitely a lot of pressure. Man, if I mess this up for them, I could lose them a national championship.” However, Sindelar must do a stellar job in practice, as she often gets the call from specific athletes to set equipment at meets as well. It’s all about trust, knowing that the person on the other side of the mat knows you well enough to have your back. Trust takes the guesswork out of it, and allows the gymnasts to just go up there and do their thing. And “their thing” at Oklahoma is back-to-back 10.0s.

Managerial duties don’t begin and end with mat moving. From setting up meals during away meets to measuring athletes for the perfect leotard fit, they do it all. Sindelar walked me through her step-by-step meet-day routine. Managers arrive at the locker room before the athletes to “hang up [the athletes’] warm up leo and their competition leo in their locker, and get all of their food set out for them.” Next comes setting out the judges’ gifts, so the judges know their time is appreciated even though they might get heckled by fans for a 10.0 or two. Next, the mats need to be set up throughout the gym; tape lines mark starting points and board positioning for bars. Throughout warmup and the competition, managers fulfill the role of undercover superhero, taking care that all equipment is in its proper place at just the right time. After the meet, Sindelar can be found “cleaning everything back up, getting [the athletes] their cherry juice for recovery, picking up their leotards and making sure they don’t forget anything.” In short, managers are the glue that holds this sport together. Their job allows athletes to just perform and coaches to just be coaches.

Although the role of team manager comes with many tasks, the bright spots are plentiful too. In many ways, a victory for the team is a victory for the managers as well. When asked what her favorite memory over the last four years has been, Sindelar replied, “Maybe this is obvious, but watching them win nationals my first year (2019), which is really cool because I know it’s not me winning it, but it’s very rewarding when you see their struggle everyday in practice and all the work they put into it. And then being able to watch them get success out of it… It’s just so awesome. I’m so proud of them.”

To make a spin off the cliche about child rearing, it takes a village to make a national championship team. And the managerial staff is part of that village. Without them, leos wouldn’t be washed, gymnasts wouldn’t be fueled throughout a meet and springboards would never make it to their final destination. The sum of the little tasks they do make a big difference in how the team ultimately functions and performs. With that, I have one thing left to say, “Congratulations, Reid Sindelar, you’re a national champion, too.”

READ THIS NEXT: Consistency and Familiar Faces Ring in the Jen Llewellyn Era at Washington