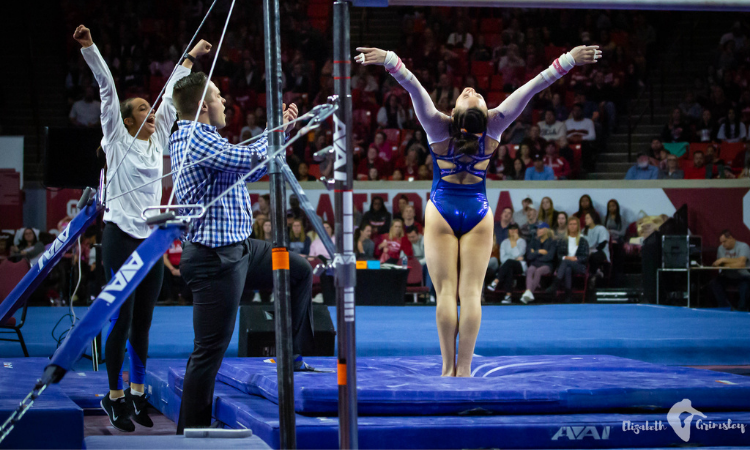 It’s what gymnasts, coaches and fans all dream of: an incredible routine, a split second of flight, a landing perfectly in control. The crowd erupts and the team celebrates with hugs and high fives, their smiles infectious. Sticks aren’t exactly rare in college gymnastics, but the energy they bring is unmatched in any other level of the sport. Great landings across the country are often accompanied by dramatic backbends, spirited chants, group dances and even awarded objects in anticipation of a big score. It’s a tradition that can be described as over the top in the best way, one of the reasons we love watching season after season.

So what exactly makes a college stick so engaging? There are countless technical components to landing well, but the elements that separate college sticks can’t be found in the code. Four of these are laid out in a series of steps below, examining stuck landings from the air to the team huddle. Rachel Slocum, former standout at Florida and Eastern Michigan known for her joyous stick celebrations, provided her perspective on landings and discussed some of her most memorable sticks.

Step One: Get Airborne

A great landing has to come from somewhere. College gymnastics encourages athletes to perform simpler skills with clean form and maximum amplitude, and as a result, we’re treated to dynamic dismounts and sky-high tumbling passes. These set up potentially spectacular landings. For a split second, everything seems to move in slow motion, and the entire arena holds its breath. Many fans are likely focused on the upcoming landing, but Slocum wasn’t thinking that far ahead. “I wouldn’t say I was necessarily focused on the landing, just on doing good gymnastics,” she said. “Before I was even in the air, I was in gymnastics for my teammates. I’ve always been the type of person who feeds off of everyone else’s energy, and just being able to go out there and do that big vault, get that big score for my team…that was the underlying thing that kept me going.”

Because of this dedication, a landing may be affected long before the routine even begins. It’s a common saying that sticks are contagious, but depending on the lineup’s performance, a gymnast may simply want to land on her feet. “I would use the previous vaults [to set] me up,” Slocum added. “If there was a stick fest in front of me, it would kind of hype me up and let me do a bigger vault. I think having a better lineup definitely propels you to be more willing to go for the stick versus a lineup that might not have been as strong.”

Once hands or feet have left the apparatus, it’s all about completing the skill and spotting the landing. The tiniest details can mean the difference between a stick and a major error. There’s only a moment between the gymnast and the mat.

Step Two: Stick the Landing (or Pretend to)

“Success. That’s the word that I would use,” Slocum said about the perfect landing. “That bottom line of preparation, and it all comes together right in that landing, in that moment when your number is called. You step up and perform, and you do it as well as you possibly could have done it. Success.”

When it becomes apparent that feet have remained firmly in place, a new rush of emotions begins. “I don’t know; something just overtakes you,” Slocum explained. “The feeling you get, it’s almost indescribable. You’re so overcome with joy, excitement, awesomeness. The energy from inside. I would jump up and down, it would be so overwhelming.” This is the instant where college gymnastics begins to separate itself. Team bonds, school pride, massive crowds—these create a buzz that explodes into a roar when a landing is stuck. Everything that follows feeds off of that energy and builds it up for the next landing.

Sometimes the atmosphere is so electric it can hide a stick that didn’t exactly live up to its name. Over time, the term “college stick” has come to signify a landing that was sold well, whether control was maintained or not. It’s common to see gymnasts lean or fall out of landings but maintain the energy as if they performed perfectly. It’s a charming effort that sometimes fools the judges, and hey, why not try?

Some gymnasts pause. Some gymnasts pump their fists. Some gymnasts bend backwards so far we wonder if their spines will be affected. Everyone salutes differently, and this is reflective of how they express excitement over a great routine. Slocum described her salute as a “yeah with 100 Hs and five exclamation points.” Yet she admitted that often “the salute is kind of a blur. You know the judges are there and you have to finish, but that’s not what you’re worried about. You’re worried about the energy you got from that amazing routine you just performed.”

Dramatic salutes can appear dancelike, almost requiring rehearsal, but Slocum insisted they happen in the moment. “We all know the ‘college salute,’ like the back is so arched and I can’t even put myself in that position now,” she added. “You can’t put yourself in that position unless you just did that amazing routine and that success overcame you.” Audiences see gymnasts throw their heads back with high-wattage grins, flick their wrists and hold the salute for what seems like ages. They see fast salutes, slow salutes, confident salutes and surprised salutes. Favorite routines or memorable triumphs are often encapsulated by how the gymnast responds to landing. It can be as important to the overall impression of a routine as acrobatic or dance skills.

Slocum, who is now a volunteer coach at Arizona State, loves how salutes empower her athletes. “One of our seniors last year, Cairo [Leonard-Baker], had a type of boss girl energy,” she said. “It would say, ‘I knew I was going to hit that, and I knew I was going to do that,’ which was always an amazing celebratory presentation you’d want to see. Hannah Scharf definitely knew when she was going to nail a routine, and when she hit that beam dismount and you see the salute, it’s just crazy. Jada Mangahas’s energy is amazing, like she celebrates and her teammates get really into it. And Cassi Barbanente, when she hits her bars dismount and she sticks it, everyone is fired up.”

The crowd erupts, the gymnast salutes, the team can’t rejoin her fast enough. There are tight hugs, high fives, fist bumps, screams, dances and perhaps even tears, if only from the audience. We’ve seen stick crowns and elaborate handshakes, 10.0 signs and pride capes. Stuck landings bring nothing short of elation, and the team celebrations they elicit showcase the best of the sport. Again, no two squads are alike, with some coaches taking a back seat and others practically saluting themselves. It can be described as joyful chaos, lifelong memories being formed in clouds of chalk and glitter.

“I want to shout out Jenny [Rowland],” Slocum commented. “I would always jump into her arms, and we would do this big hug. Sometimes I don’t think she was quite ready, but I’d definitely say that hug meant a lot to me. Just knowing that she supported us and really trusted us with everything was amazing. I also have to shout out Alex [McMurtry]. She would always be after me in vault, so I would go up to her and be like, ‘I set you up,’ so she would know that she had it, that she could do it, and we would fist bump. That energy between our fist bump was so powerful.”

She added that at ASU, “the coaches Jess and Jay [Santos] and Kristin [White], get really into it, which I think hypes up the girls too. Last year, it was more fist bumps and maybe one high five or elbow bump, whereas this year, I feel like we can do kind of what I did with Jenny—jump on top of her. Not that I want my athletes to jump on top of me because I feel like I’d fall over in heels, but that type of big hug, that type of big celebration, that ‘I’m so proud of you’ moment I can’t wait for.”

Slocum feels that her team has earned the right to celebrate. “I think with last year and ASU doing so well and finishing ninth in the country, you could tell the girls got more into it,” she said. “We’re definitely working towards that more this year. We know how to do good gymnastics. It’s more so about showing it off, more of that swagger aspect that we’re going for.”

Putting It All Together

All the elements of a college stuck landing combine for only a few seconds of time, but their impact can be felt far beyond that. In the stands or across the world, fans can marvel at the athletic achievement, emotion and team camaraderie. Celebratory moments inspire fans young and old and can shape gymnasts’ careers even after they hang up their leotard. For Slocum, there was nothing quite like her first vault in front of Gator fans. “I remember my first home meet at Florida. I was fourth or fifth, towards the end of the lineup. Coming from a smaller school, we didn’t have a huge fanbase, but when I did that vault and I stuck it and the crowd exploded, when I tell you I fed off that energy for weeks. The crowd was so into it, and my teammates were like, ‘That was insane and everyone else thought it was insane!’ Being able to do that in front of that many people and in front of my team, it was just an incredible feeling.”

READ THIS NEXT: Is a Stellar Freshman Class the Answer to Florida’s Championship Drought?