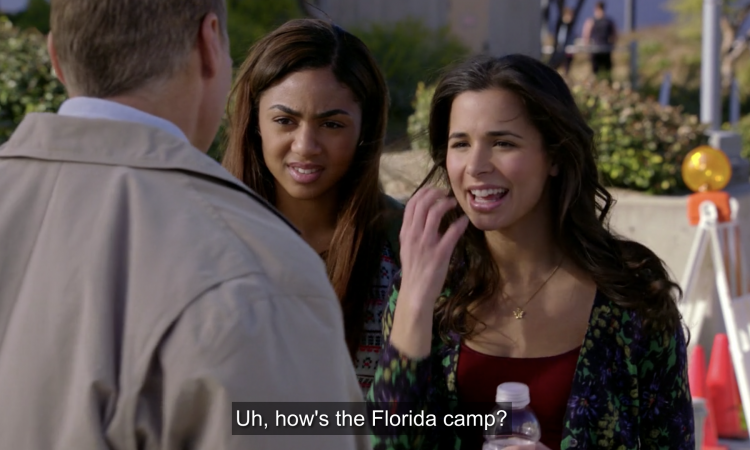 At the hospital of horrors, Lauren learns she needs only a catheter to change the radio waves of her heart. Or something like that. It’s kind of hard to focus on anything coming out of McDreamy’s mouth on account of…McDreamy himself.

Doing what Patrick Dempsey could never do, in my opinion: deal with Steve Tanner trying to mansplain medical issues to a doctor.

At the NTC, Kaylie and Jordan encounter a nondescript white man who was apparently their coach as a child.

Seriously; with all the young, healthy looking extras and cast members at this utopian tract, I kind of forgot old people existed in the world of this show. Clearly Jordan did too, because she’s super uncomfortable by the whole exchange.

Lauren and Jake are chatting at the hospital when Payson and Kaylie barge in to cock block. Payson happily recounts how much she’s in love with Rigo while Kaylie thinks about the man she doesn’t have and Lauren thinks about her man who was just escorted out.

“We made love in a tent in his dorm room…it was amazing.”

Though this sounds appealing to approximately zero people, Kaylie appears to feel a little sad in the aftermath of her breakup. Payson, never one to read the room, just smiles and waves.

McDreamy then enters to offer a bit more of a wanted cock block, but it all becomes less fun when he tells Lauren she won’t be ready to compete in time after that procedure they mentioned earlier. He’s serving you Handmaid’s Tale realness while he does it.

Never one to be down long, Lauren gets a little sad but begins formulating a plan in her head. To…defy science. I believe in her—if politicians can do it, so can she.

With her options to take down the Rock girls dwindling on account of them having legitimate talent, Wendy perkily asks to discuss the list of banned substances with Dr. M. Girl, by this time, the 2000 Olympics had happened already…they wouldn’t be that dumb…right?

And Dr. M is all too happy to oblige with a super medically official shorthand.

I have to laugh at how little Wendy seems to believe in herself. For someone that cocky, she sure feels threatened enough to resort to sabotage that might not even work.

Parking lot weirdo Coach Ray is announced to be a “second set of eyes” on routines at the national team camp. Because we definitely need more random people hanging out in the room while these girls prepare for the biggest competition of their lives.

Wendy asks who she thinks her biggest competition is, and Ray says it’s “not his place to say.” Right, because as he said, he wasn’t just invited here to provide independent analysis.

Lauren tries to get back into the gym, but Coach Mac won’t allow it that easily because he’s dealing with potentially the dumbest conflict to ever happen on the show: Payson being upset about her place in the lineup.

What is this, college? It’s yet another instance caused by weird Coach Ray, who leaks to Payson word of her placement in the lineup. What exactly are this man’s motives? Is he trying to log all this information to his Facebook diary to become the next Tom Forster? Does he want to rise within the NGB? Did he want to escape Florida for the far reaches of the Pacific Northwest? Either way…

After apparently forgetting about this little snafu (it’s almost like it wasn’t important), Payson and her butterfly friends tell Rigo that they have no regrets surrounding their relationship.

Again, a truly different Payson than we’ve ever seen. Just imagine mid-season 1 Pay hearing any phrase ending “…in a tent.” The horror.

Kaylie is playing the “Eliza Hamilton in Burn” part quite well, literally erasing Austin from the narrative.

I get it, Kaylie; hearing about my friend’s dalliances in a tent would definitely turn me off every instance of love in my life too.

Not sure what it is about this scene of Wendy negligently placing cold medicine in a blender that shows me how much she looks like Dakota Johnson in Fifty Shades of Grey.

She hides it well when Kaylie comes in the room by playing to her vulnerable state and offering her the smoothie as a kind gesture. I’d probably turn out down out of fear she accidentally mixed some baby formula in there, but either way, Kaylie’s more trusting.

Lauren’s so determined to get back in the game that she’s willing to try various pseudoscientific methods, including random poses on the green and…whatever this is.

Apparently this is a miraculous medical treatment. If only if Lauren could wear it on beam without the threat of…this happening.

Dr. Walker is worried about the wires crossing with Lauren’s…movements when she does gymnastics, so the girls helpfully inform him of a novel new invention to help him connect the dots. That invention? A cell phone. Technology.

The penultimate episode of this show and women, believe it or not, still aren’t horses.

I’d look this way too if I was in the arms of someone wearing such different patterns clashing.

Rigo helps Payson work through her issues with her floor routine, because that’s still not resolved after all these years, and it’s basically the dance scene from Ex Machina and Napoleon Dynamite combined into one. Then they embrace.

Lauren’s wireless transfer seems to go decently well in the gym as she does a flawless beam routine, but Mac still seems a little apprehensive about the fact that she was literally just in the hospital. Dr. Walker is on hand to let Mac know that any scientific point can be proven with the right amount of money, and does he need anyone to forge some documents any time soon?

Coach Ray pulls a visibly frustrated Jordan aside to tell her he’s sorry to have been neglecting her all this time, but clearly the time he did put into improving her did plenty because she’s here at the training center. Girl, couldn’t he have used some of that “Florida camp” money to rescue her when she was living in a truck? Something isn’t right.

Lauren and Jake have a heart-to-heart where he tries one last non-scientific effort to get her back into the zone. On today’s episode of “do something totally in the realm of ordinary and call it a revelation:” helping her narrate her beam routine in her head.

The yellow of this scene evokes the idea of Lauren being in a padded room, and that honestly tracks.

Wendy comes into the gym and pronounces herself to be the next Shawn Johnson, and it’s all too much for Jordan, who rushes outside to go Carrie Underwood in “Before He Cheats” on Ray’s car.

Sadly, our Florida man turns out to be as skeevey as his predecessors; we learn he was abusive to Jordan. Kaylie is really upset Jordan never mentioned it and then immediately turns it around on Jordan, telling her she’s probably wrong and they shouldn’t risk Ray’s career.

Kaylie finds it in her heart to at least help Jordan cover up the car damage. We end with a dramatic escape scene of the girls running from the cops in a true “Get Out” moment. Let’s just hope it ends along the lines of that movie’s conclusion.

Get it? Because they’ll be on a plane to London? Also, eff Ray.

MIOBI made a score of 2 this week, representing the two skills Lauren apparently knows how to do in her beam routine (that would be a front and back tuck). At least that’s all we ever see.