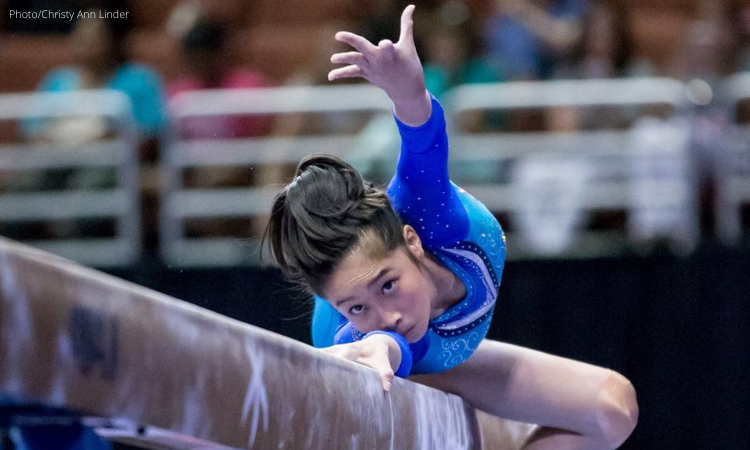 The most anticipated series is back! We looked at the data and videos for each incoming elite freshman on each event to see which gymnasts are at the top of their class across the apparatuses and in the all around. This week we’re looking at the top elite beam workers for 2021. Without as much data to work with as the J.O. rankings, and since many of the difficult routines will be downgraded once the gymnast gets to college, we focused on the factors that tend to contribute to a high score in NCAA: acrobatic form, extension in dance elements, smoothness and confidence. We also took into account the potential impact the gymnast could make to their school’s beam lineup.

The 2018 world silver medalist is expected to bring Kyla Ross-calibre beam routines to UCLA. She has the ability to replace Ross well—her elite set is difficult and her execution is very good. We suspect that Padurariu, who is still training for the Tokyo Olympics, could compete routines with various levels of difficulty in her freshman year, à la Shallon Olsen. We could then see some impressive skills, including her difficult triple series—side aerial to layout stepout to layout stepout.

Alexeeva brings significant international experience to Stanford, as she competed for Russia at both the European championships and the world championships in 2018. Her elite routine was bold, yet clean and solid, and we would love to see some of that difficulty in college. Her mount—layout stepout mount to layout stepout—would be an immediate fan favorite, and so would her turn series—triple wolf turn to double wolf turn.

Malabuyo will bring stunning lines to UCLA, and if healthy, she will challenge Padurariu for the anchor spot. Her elite routine included plenty of difficult elements, and we hope to see some of them in college. She will likely not perform her standing Arabian but she may keep her triple series—BHS + LOSO + LOSO. Her split positions can reach Grace Glenn-levels of perfection, as do her precision and confidence.

With such an unusual trajectory in her last few years as an elite gymnast, it is fair to have questions about Nguyen’s readiness for college competition. But beam is the event we have seen her training most in recent years, and her elite composition and form mean she has great prospects and lots of options. We would love to see her attempt her Dudnik combination or her beautiful Onodi in college.

Onyshko is a 2016 Olympic beam finalist, a result that is a testament to her potential here. Since then, she downgraded her difficulty a bit, but she still has plenty of skills to choose from. Plus, her execution is good. We would particularly like to see her triple series in college—BHS + BHS + layout to two feet.

Esparza was a bit shaky on beam throughout her elite career, but she has the potential to execute a clean and solid set in college. Some of her combinations, including her BHS + LOSO series and her switch leap to switch leap half, seem to be made for the NCAA. Esparza is not Glenn, but could be an excellent lead-off performer.

Lapp’s elite scores were uneven, but she brings a lot of potential to LIU. Her lines are excellent and so is her rhythm. She could anchor LIU’s first ever beam lineup. Among her skills, we would be excited to see her compete her front walkover mount.

Adams may not have been the flashiest beam worker during her elite career, but her scores were consistent and her lines were very good. In her collegiate routine, she can easily exclude her weaker skills and focus on her best elements. Among her best skills is her double twist dismount in combination. She will bring an elegant look to Alabama’s beam lineup.