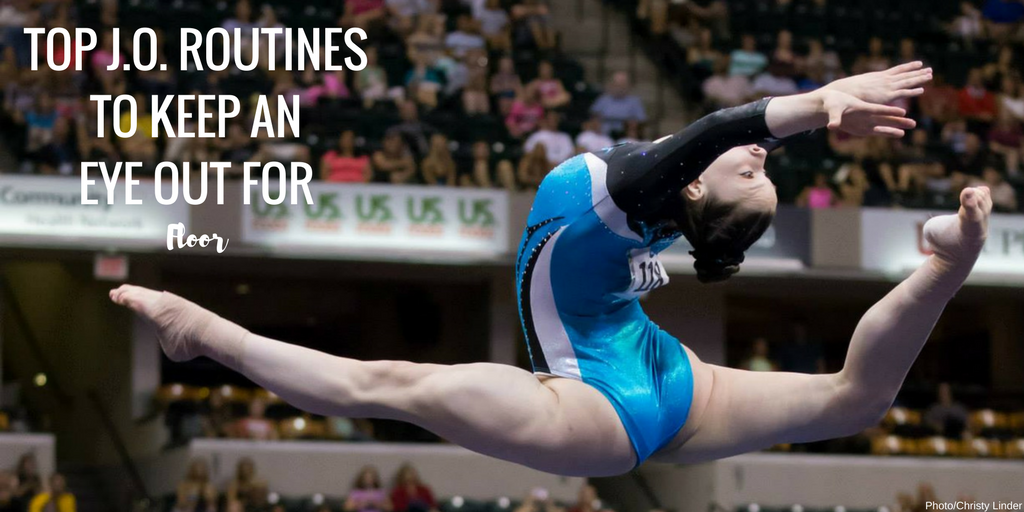 For our final installment we’ll be breaking down the top 10 floor routines. Heralded by many as the event where gymnasts get to “showcase their personality,” the floor exercise is often the highlight of a meet. The crowd gets involved in its favorite gymnast’s routines and clapping or cheering along to the music. Which routines are likely to be among the favorites next year?

​Loper’s floor routine already contains the difficulty to be able to fit into a college lineup. Her passes are a double pike, a front layout to Rudi and a back 2.5 twist.

​As with many of her other events, Ramler brings a high level of difficulty to her floor routine with her opening pass of a tucked full-in. Her leap positions are also close to perfect and showcase her lines. In addition to the skills in her routine, the dance is dramatic, engaging and should be a crowd favorite next year.

​Mitchell will bring difficulty to the Spartan’s floor lineup next year with a full-in for her opening pass and double layout in her back pocket. She should post good scores for the team with nice leap positions and very few built in deductions.

​Roby did not compete at nationals this year due to an ACL tear in March of 2017 but should be a star at Nebraska with top 10 scores on bars, beam and floor. She doesn’t have as much difficulty as some, but her passes are high and clean.

​George’s routine is engaging, upbeat and contains sky high tumbling passes of a front tuck through to a double back, a front double twist and a Rudi. Look for this routine to score well and be a crowd favorite for the Bears next year.

​Hebert’s routine is another one that will be interesting to watch next year, as UC Davis is another school that doesn’t always receive the huge scores for its top notch routines. Hebert’s routine consists of a front tuck through to a pike double back, a back 1.5 to front layout and a tuck double back.

​DeHarde opens her routine with a solid double layout which will be a good addition to the Aggies’ lineup. Her other passes are a Rudi to a layout stepout and a pike double back.

​Flam opens her routine with a giant double arabian with her legs absolutely glued together. The routine will be a highlight for the Cardinal next year and when combined with Elizabeth Price, Taylor Lawson and Kyla Bryant, it will certainly make Stanford’s floor lineup one to watch.

​While Skaggs didn’t compete floor at the end of this season following an ACL scare right before the Nastia Liukin Cup, she did perform it for high scores many times at the beginning of the year. Because videos of her current floor are not currently available we can only make assumptions about her routine from past coverage. Her routines in the past have been composed of big powerful tumbling and great execution.

​The highlight of Yanish’s routine is definitely her huge opening double layout. Her form is incredibly clean with her legs absolutely glued together. That form is continued through her second pass of a front layout to front full and she closes out the routine with a giant tucked double back.
Facebook0Tweet0Pin0