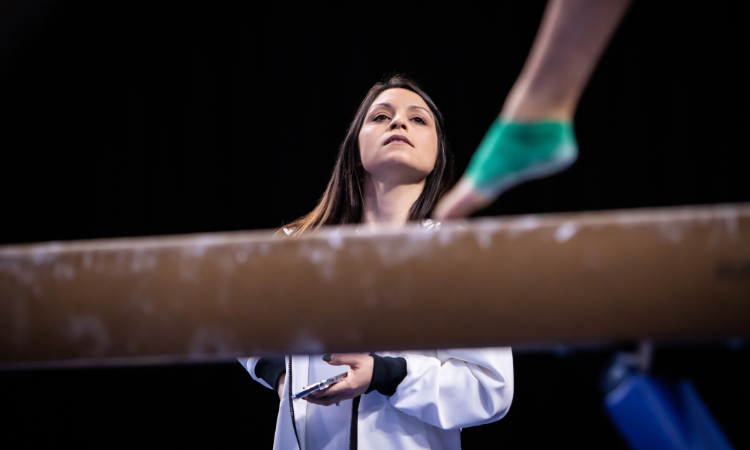 While head coaches are ultimately responsible for their programs’ successes and failures, assistant coaches can make or break a team. A strong assistant will elevate their event, affect recruiting and contribute to positive team culture. We rounded up six of the top assistants across the NCAA—some obvious and some under-the-radar—who could make some moves in the next few seasons. Consider this our assistants on the rise watchlist.

A young coach, having completed just her second year as an assistant at SEMO after serving as a volunteer in 2020, Alexander has already cemented herself as one to watch. SEMO has a reputation for mentoring coaches who move into bigger jobs (Sarah Brown, Chris Bogantes and Tom Farden, to name a few). In her short tenure, the Redhawks have had three above-average seasons, including their best finish since 2013 in 2021. Alexander coaches bars and beam and does choreography for the team. Beam was regularly SEMO’s best event in 2022, with a whopping 49.425 at USAGs, where the Redhawks missed qualifying to the team final by a tenth. Notably, SEMO gymnasts won bars, beam and floor titles in event finals. Alexander is an easy pick to move into an assistant role at a Power Five program looking for a young, passionate coach.

Hansen returned to her alma mater to coach in 2021 after a tenure at UC Davis. The Hawkeyes have excelled on beam under her coaching, and the team has finished at No. 17 and No. 15 during her time in Iowa City. Adeline Kenlin qualified to beam as an individual and tied for second, becoming just the second Hawkeye to land a first-team All-America nod on beam. While Hansen has deep ties to Iowa as an alumna, it seems evident that she’s poised for big things.

Muras’ three years at Illinois State have seen two gymnasts qualify to nationals, competitive recruiting and an elevated social media presence. Muras, whose background includes elite, optional, high school and previous college volunteer coaching experience, has quickly become a name to watch. He has helped bring in two three-star recruits (Berta Pujadas Rusinol, class of 2023, and Joy Ziegenfelder, class of 2023), not to mention the unrated Jaye Mack and Alana Laster who became stars in the 2021 cohort. Illinois State is, additionally, leading the way on inclusivity, quietly but ardently supporting Black and LGBTQ+ team members for several seasons now. While we’d hate to see the trio of Muras, Bob Conkling and Megan Harrington break up, it only seems like a matter of time until Muras helms his own squad or moves into a Power 5 assistant role.

A Spartan through and through, Jones has been a critical part of Michigan State’s rebuild and 2022 success. She coached the beam team to a stellar year, including Skyla Schulte’s historic performance at nationals, and is a top leotard designer in the NCAA. Whether Jones eventually takes over the program she has been part of her entire career or leaves East Lansing for a different gig, she exudes head coach-to-be energy.

A long-time assistant to Umme Salim-Beasley at both Temple and Rutgers, Halbig has coached athletes to big successes on beam. During her Rutgers tenure, the Scarlet Knights have set beam team program records, Erin McLachlan set the individual beam record which Hannah Joyner quickly tied and Joyner qualified to nationals on the event. Halbig also manages academic success, and has seen the team GPA jump significantly over the past three years. She is completing a PhD in sport psychology focusing on preventing burnout in sport. All told, Halbig is a shining example of a head coach in the making, with success across performance and academics and a mind toward the mental well being of her athletes.

Harold has been a Texas Woman’s assistant since 2018 after a stint as a graduate assistant and time as a student assistant at Utah State. The Pioneers have won three USAG national titles during her tenure. In 2021, Harold added recruiting to her slate of duties. She seems poised to move into and thrive in a Division I assistant role, should she be looking to leave Denton.

READ THIS NEXT: Coaches on the Hot Seat—or Due for a Promotion—After the 2022 Season