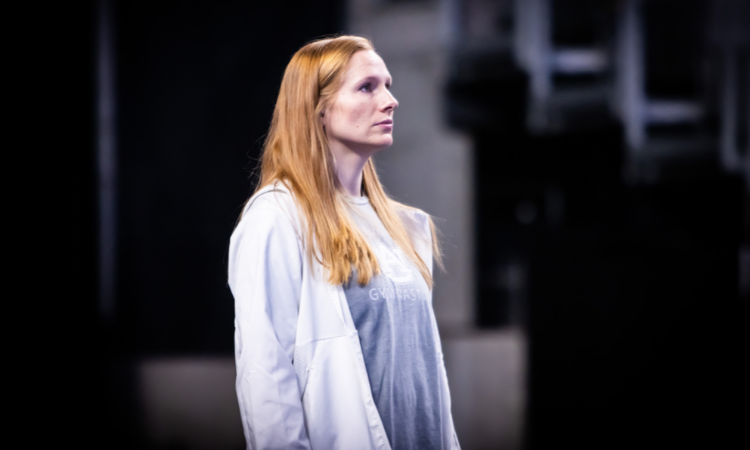 The 2022 season has wrapped, which means it’s time to hop on the annual coaching carousel. There are already a variety of jobs open. We took a look at them, the coaches poised for a promotion and the coaches whose jobs are in question.

Phew, we all assumed it was coming, but the sh*t hitting the fan was still a big Tuesday evening whammy. The job posting is weird. There’s no other word for it. It closes on “Sunday” April 26 (the 26th is a Tuesday) and the job begins May 1. We don’t know about you, but we’ve never seen any job, let alone at an academic institution, turn around a new employee that fast.

Does UCLA know who it’s hiring? That seems probable, which narrows down the list to folks previously known to the UCLA AD. Jordyn Wieber has the advantage of friends in high places—Miss Val—and her contract at Arkansas being up for renewal. That said, she seems to have fully bought into her role in Fayetteville, and if Arkansas offers her a competitive salary bump, she could be there for the long haul.

It would be a bad move optically for the Bruins to elevate any of the current staff to head coach. There has just been too much negative limelight this year, and it would seem insulting to the gymnasts on the team who so publicly expressed their outrage earlier in the year. Dom Palange for one seems widely beloved; perhaps he’ll find a role elsewhere.

Regarding Chris Waller’s note that he is “pursuing other opportunities,” that seems unlikely. It’s a common-enough euphemism that I think the gymnastics community would be wise not to overreact and assume he’s going to land another head coaching role. No AD who is plugged into what has gone on would want that negative attention. Plus, hopefully, no AD would want to subject their athletes to anything like the UCLA gymnasts went through this year.

Were you one of the many who assumed we’d get the Clemson news drop immediately after nationals? Same.

With level 10 nationals fast approaching in mid-May, it would behoove the Tigers to have someone on board by then for recruiting purposes. The timeline is getting worrying, given that the program is set to begin competing in the 2024 season, and the class of 2024 can begin making verbal commitments on June 15 of this year. It’s a big, flashy job that needs a big, flashy hire.

After Barbara Tonry’s death last year, Andrew Leis took the helm as the interim head coach. Yale is now searching for its next permanent leader. It’s very possible that Leis will keep the job. He’s been with the program since 2020, and the Bulldogs had a perfectly respectable season under his leadership this year. It is worth noting that Jason Vonk is a former six-year assistant. If the Georgia staff is further shaken up, it’s certainly possible he’ll make a return to New Haven. Don Houlton, who recently exited Central Michigan, is also a former Yale assistant to keep an eye on.

It appears that Peter Jansson’s retirement hiatus may be coming to an end. The Wildcats’ have a job posting up for a bars-focused assistant and recruiting coordinator. The job would be a great step up for a qualified assistant looking to move into a Power Five conference role. Arizona is a team that has been rebounding from some disappointing finishes a few seasons ago and could be an exciting prospect for a coach looking to help return the program to nationals for the first time since 2004. Someone like San Jose State’s James Williams might just fit the bill.

Don Houlton was removed from the Chippewas’ roster immediately following the season. MAC assistant roles are the perfect place for longtime level 10 coaches to get their feet wet in the NCAA or for former athletes to start their coaching careers. Gymnastics alumnae who are volunteers or who have expressed interest in NCAA coaching are good ones to keep in mind here.

While this role is not a coaching job, we do occasionally see operations folks move into coaching later. The Mountaineers have developed a bit of a reputation for attracting gymnastics alumnae to the staff, after Erica Fontaine served as a volunteer and Zaakira Muhammad joined the staff as an assistant in 2021. It’s a job to watch for recent grads or anyone trying to break into the NCAA gymnastics sphere.

Due for a Promotion

We’ve said it before, and we’ll keep saying it until she has her own program. McDonald is one of the best, and most underrated, assistants in the country. She’s well-connected and has led the Bears to success on bars. It only seems a matter of time until she is wooed away from Berkeley.

The newly minted associate head coach at Auburn, Johnston is a highly regarded coach who helped lead the Tigers to their best finish in program history at No. 4. While it seems likely that Auburn will do everything it can to keep its staff intact, Johnston is sure to be a sought-after coach as the carousel gets going.

The Tigers had an incredible season, not in small part due to its stellar floor squad, which MacPherson assists with. She’s also the lead beam coach. A former elite and Arkansas alumna, she has all the credentials to break into the head coaching world. Currently the Tigers’ associate head coach, MacPherson seems poised to either take over Missouri when Shannon Welker eventually retires or land a head role somewhere new.

The Griffeths are always on the list, and always will be until one of them is named a head coach. That said, the rumor mill suggests that LSU has done everything in its power to keep the duo on its staff, so the move doesn’t seem likely this year.

Last year, we named three coaches who were running out of chances. Two have done enough to secure their jobs.

Yim’s success this year was more than enough to secure her place at Stanford long term. The Cardinal had its best finish since 2016 at No. 14, stunning the Seattle regional field when it not only won its play-in but qualified to the regional final. Kyla Bryant qualified to nationals on floor, and the team notched two 197s at Alaska Airlines Arena. Moreover, Yim has built a staff and recruiting base with an eye toward returning the program to greatness. It took her some time to settle in, but it certainly doesn’t seem like she’s going anywhere.

The Gators had a few disappointing postseason exits in recent years. They may not have won the title in 2022, but a very close second-place finish and a strong postseason run did a lot to bolster confidence in Rowland’s ability to deliver a title in the coming years. Everything about Florida looked different this year. The pacing was nearly immaculate, after Rowland rested top athletes regularly throughout the regular season, a departure from her previous strategies. With a healthy Morgan Hurd and Ellie Lazzari next year, plus freshmen Kayla Dicello, JaFree Scott, Shiles Jones and Sophia Butler (if they all arrive despite not all signing yet), the Gators are looking dangerous—and Rowland is looking very secure in her job.

On the Hot Seat

What’s left to say? If this one is news to you, you’ve been doing an admirable job of living in a bubble, and we envy you. The basic outline of why Georgia needs a new coach has been public knowledge for years now.

Given that Georgia has declined every year of Kupets Carter’s tenure, culminating in the worst ranking in decades, there should be no more excuses. That doesn’t mean that Georgia won’t find some excuse, but it SHOULDN’T.

Unfortunately, it’s looking more likely that Josh Overton, one of Kupets Carter’s assistants, is taking the fall for the team’s performance rather than the head coach herself.

Nebraska might not have quite the championship pedigree that Georgia does, but Brink still took over a team that regularly contended for the Super Six and turned it into a team that failed to make regionals twice in a row. There are other problems at Nebraska, too, including a steady and concerning bleed of talented underclassmen. We’re not sure what’s going on at Nebraska, but we’re pretty sure new coaches would fix a lot of it.

Brown deserves some credit for being, by all appearances, somewhat less evil than her predecessors. Still, her tenure in Happy Valley has been characterized by declining results, and missing regionals this year might attract negative attention from an athletic department with high standards and a great deal of dignity. Penn State has also had a great deal of assistant coach turnover in the last few years, which may be due to the subpar social scene in State College, Pennsylvania, but may also have other factors.

When LSU nearly failed to qualify to nationals and then actually failed to qualify to the team final last year due to a pair of subpar beam rotations, LSU fans immediately called for Gnat’s job. At that point, we weren’t sure if the Tigers’ beam struggles were more than a fluke. Now, though, LSU’s beam woes definitely look like a pattern. While LSU beam performs fine in regular season—actually ranking higher than Jay Clark’s famous bars team—it can’t seem to handle postseason pressure. Unfortunately, handling postseason pressure is really important. Even if missing regionals this year isn’t fully Gnat’s fault (and it isn’t), it’s easy to imagine her losing her job just to satisfy donors.