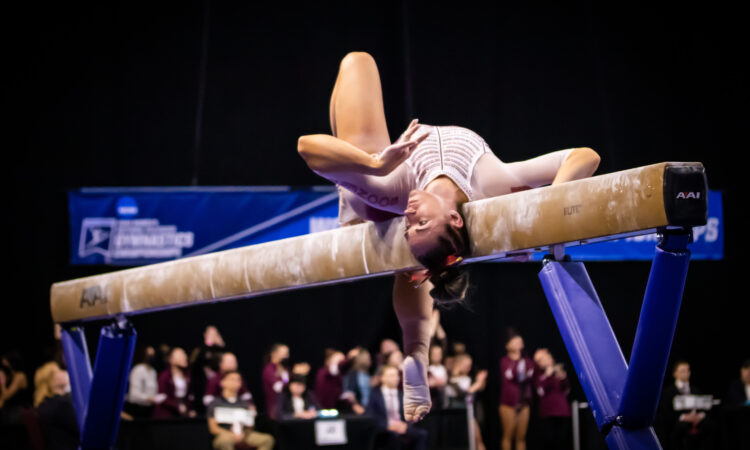 “I want to add to what I said to you earlier,” said Oklahoma head coach KJ Kindler to a reporter just as the Norman Regional Final postmeet press conference was set to wrap up.

The nation’s top ranked Sooners had just secured their 18th-straight trip to the NCAA championships by winning regionals, and after being asked about doing so sans any all-arounders, memories of a previous season popped into her head.

“In 2010, when we made our first Super Six, where we placed second at the national championship, the first time we’d ever been in that final, we had no all-arounders,” said Kindler. “It was kind of our M.O.”

Since that 2010 season, Kindler and Oklahoma have not lost a regional, claiming 12-straight titles and winning four national championships along the way. The Sooners’ regional-winning 198.250 this season bested its 2010 regional-winning total by exactly a point, with the all-arounder-less M.O. once again proving to be plenty successful. That 198 was no match for the rest of the Norman Regional, with fellow nationals qualifier Minnesota not even within half a point of the Sooners.

Kindler credits the health and depth of this year’s team as keys to that success without anyone on all four events, but more importantly, it’s because everyone on the team has been great at embracing their role.

“Everyone has a specific role,” Kindler said. “Whatever your role is, whether it’s a bars specialist or a three-event athlete or to train the all-around and be ready to go if you’re called upon, they have embraced their roles.”

The freshman class has been particularly astute at this. Postseason newcomers Jordan Bowers, Danae Fletcher and Danielle Sievers transferred their regular season’s success to the regional, with all three notching multiple 9.9s over the weekend.

“To have these young athletes come out there and perform the way they do, like they are veterans, is incredible,” said fifth-year Carly Woodard, who clinched the Sooners’ trip to nationals with a 9.950 on beam. “I feel like the underclassmen are really embracing [their roles], and it’s showing.”

Kindler echoed Woodards comments, with particular praise for Bowers who scored 9.950 or better in five of her six routines at regionals. The sixth score? Still a 9.900.

“She’s reveling in those moments, and that’s so exciting to see for a freshman. Like Carly said, for someone who’s performing at that level in her very first year, she has tremendous confidence when she goes up,” Kindler said. “She’s made a huge difference for us.”

No longer the underdogs like they were in 2010, the 2022 edition of the Sooners see their track record of success as a benefit rather than a detriment. Instead of feeling pressure from expectations, they embrace Oklahoma’s history and use it as motivation.

“When you come on a team, you know the expectation, then you can raise yourself to that expectation. That makes everyone else around you better,” said fifth-year Karrie Thomas. “I don’t think it’s a disadvantage that we have this history on us. I think it makes us better every year, and that’s why we keep getting better every year.”

Those expectations will once again be upon the Sooners in less than two weeks when they take the floor at the national championships, with the current No. 1 ranking making the target on their backs even bigger. Oklahoma passed its first test, regionals, with flying colors, and now just needs to carry that momentum with it for a very realistic shot at championship No. 5.

“Everyone’s hitting on all cylinders, and we’re in a really good place,” said Kindler.