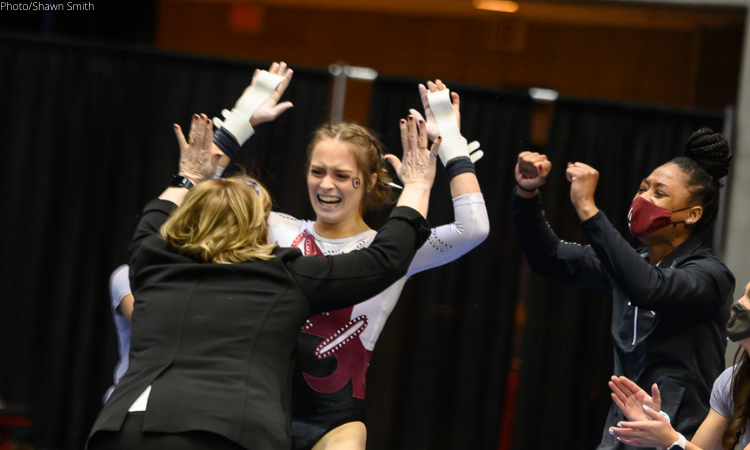 The 2021 USAG national championship was a whirlwind. Rather than the typical 13 teams eligible for qualification, only five were able to compete all season due to COVID protocols. The Ivy League, West Chester, Bridgeport and SCSU had seasons canceled before they even began. SEMO, Lindenwood, Texas Woman’s, Air Force and Centenary were the only schools to brave this masked up, will-we-compete-or-not season. Due to a lack of competitors, all five teams got an automatic bid to nationals, skipping the typical top-eight qualification criteria.

It’s crazy how things fall into place. Whether fate, luck or a consequence of faith, several stars had to align for Taylor Ann Wilson to go from zero made competitive routines to national bars champion. If not for COVID, Centenary would not have qualified to nationals as a team. If not for competing as a team, Wilson would not have been eligible to compete at nationals as an individual. If not for two key bars contributors getting hurt the week of the competition, Wilson would not have been added to the lineup on qualification day. Wilson is proof that fairy tales still do exist, but what has she done now with her pixie dust?

The 2021 season was not easy for Wilson. Due to COVID protocols, she had missed the entire regular season, changing roles to “the cheerleader, mat mover and supporter of the team.” Although illness limited her ability to train, she tried her best to contribute to the team in any capacity she could.

“Tag, you’re it.” Those are the words Wilson heard last April as head coach Jackie Fain placed her hand on her athlete’s shoulder. Not only was she in the lineup for the first time since the previous February, but she was sliding into the anchor spot. She instantly had to switch her mindset. No longer was she going to contribute from the sidelines. She was in. “I knew that the team needed me, and I wanted to be that reliable person for the team to prove myself worthy of that spot,” Wilson noted.

A vote of confidence from the coaching staff did not negate the struggles in practice the three weeks preceding nationals. Wilson is an athlete who tends to put excessive pressure on herself, and these championships held the highest stakes in her career thus far.

If you’ve ever watched her bar routine, you’ve noticed something strange. Nearly every athlete salutes the judge and then face the bar to prepare to mount. Makes sense. Instead, Wilson faces away and closes her eyes. “Stop. Breathe. Vision. Go.” She rapidly makes a 180 degree turn and jumps to the bar. Before anyone knows what’s happening, she’s swinging away. That strategy began during team final day. She turned. She jumped. For the first time in her career, she hit. Maloney, Pak salto, sky high full-twisting double tuck–they all came easily.  That routine made Wilson the very last qualifier into the event finals.

Event finals required a long wait. Wilson would be the very last competitor on the day. She watched every other qualifier compete before her—the very best in USAG. “Stop. Breathe. Vision. Go.” She spun around and jumped. Maloney, Pak salto, sky high full-twisting double tuck. This time, it was stuck. Wilson thrusted her fists into the air in elation, embracing her head coach standing beside her. When asked if she thought she could’ve won the title when she landed her dismount, Wilson replied, “Honestly, no. I just knew I had done the best routine of my life. I was just proud of the work I had done.”

Prior to that weekend, Wilson’s career high sat at 9.150. After qualification day, it was a 9.725. After the event finals, it was a 9.875. The best routine of her life made her the first individual national champion in Centenary gymnastics DIII history–a shocking Cinderella story.

A year later, not much has changed. Wilson still anchors Centenary’s bar lineup, highlighted by her signature pivot and go. However, with a national title to her name, the pressure to perform consistently every week has gone up. “I believe [the pressure] has been the most challenging thing this year. There are expectations, but the expectations I put on myself are higher than anyone could ever put on me.”

2022 has been Wilson’s most consistent season thus far, but that did not come without hiccups. Midseason, she started having mental blocks with her dismount, getting lost in the air and not knowing quite when the ground was coming. She had to go back to the basics, a strategy that Wilson didn’t buy into at first. The coaching staff supported her the entire way. New head coach Brittany Harris encouraged Taylor, “You don’t need to worry about you until I am worried about you, and I’m not worried.” Harris was confident that Taylor would hit when it counted. She was right. The ship righted itself in the nick of time with scores trending up just enough to earn an individual bid to USAG nationals on her signature event.

This time around, she has confidence on her side. She has now proven on multiple occasions that she is capable of hitting when her back is against the wall. Not only did she execute on the national stage, but she’s hit her routines in the anchor spot each week, even with falls preceding her. Wilson’s first 9.800 on the year came at the end of the Ladies’ worst bar rotation in 2022. Her team was in desperate need of a made routine and once again, she stuck the landing with fire in her eyes. “When it comes to that sort of pressure, I thrive under it. The pressure makes me determined and more intentional in every skill I do.” That level of rising to the occasion is exactly what allowed her to leave Cape Girardeau with a national title.

While the passion and attention to detail are still apparent in Wilson’s gymnastics, in many ways she has grown as an athlete this past season. For the first time in her career she added beam and vault to her list of competitive events. Wilson has noticed a maturation within herself as an athlete. “Going through nationals after not competing all season helped me realize that you can work your way into an event, even at the last minute. Once the season starts, you don’t just give up and hope for better next year.” Instead of going into cruise control when not originally in a lineup, she continued to work hard on other events to be competition ready when she got the call. And on multiple occasions she did.

With calm confidence and a new found competitive maturity in her back pocket, Wilson marches into her second national championships. This time she will be competing as an individual along with four other teammates. Her end game is not necessarily a repeat; Wilson’s main goal is to have fun and give it her all, paying attention to the details.

“Of course there is pressure that I put on myself to be just as good as last year, but I try to remind myself that every year is different. I am a different gymnast than I was last year. I just want to have fun and be proud of myself.”

Although 2021 nationals was a dream come true for Wilson, she has continued to live the dream in the year since. It was never about the accolades or the titles but instead about the little girl who never gave up on her desires to become a collegiate athlete. No matter what happens at Cornell April 8, nothing can take that dream away from her.

READ THIS NEXT: For LIU’s Mara Titarsolej, Perfection Is About Being the Best Version of Herself