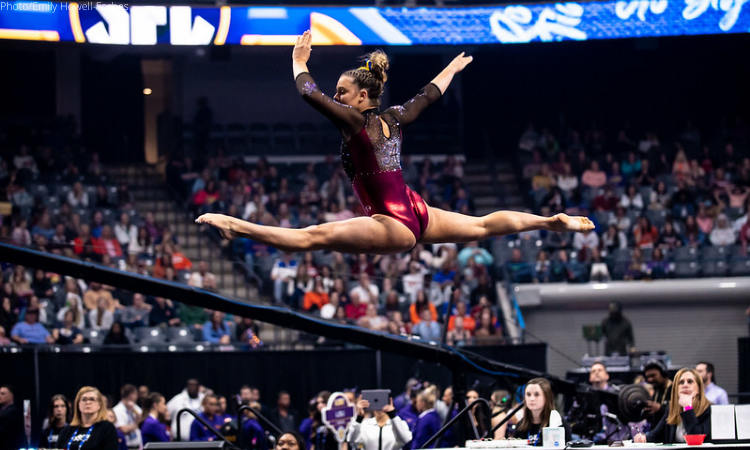 Welcome back to the Alaska Airlines Arena in Seattle, Washington! Tonight we find out who heads onto nationals. Today we have the top two teams from round two session one and round two session two. These four teams will face off, each hoping to place in first or second in order to punch their ticket to Fort Worth and continue their drive towards a national championship title.

We have no individuals, so all the focus is on the top-scoring teams between the two sessions yesterday. Today, nothing hinges on past performances, high scores or NQS, all that matters is what happens between the gymnasts and the chalk in the next few hours.

If you’re a visual person, here is the possible breakdown for qualifying individuals based on how tonight. All thanks to @tenpointohstart who has a few updates as earlier sessions finish.

The top two teams today will punch tickets to the semifinals in Forth Worth on April 14th. You can watch along on ESPN+ and find live scores here.

Quinn (Alabama): Y 1.5, looked like a hop, the landing was behind a judge.

Navarro (Stanford): Split jump mount, always love it. Comes off on her series after fighting for it. Sticks the dismount.

Neault (Stanford): Her mount is the coolest thing to me. Good series. Front aerial, nice. Switch ring could’ve been a little ringier. Sticks the RO 1.5

Bryant (Stanford): Almost a bobble in the full turn? But covers with choreo? Leg comes up on the bhs loso series. Front tuck, stacks a stabilizing step forward. BHS BHS double tuck with a step.

Soloski (Utah): High double lay to open. Hits the full split in her split jump full in her series beautifully. Front lay to front full, gets near the corner but keeps it in. RO 1.5 to front lay, stalls that perfectly. Great.

The theme of the Seattle regional is tenths, tenths and not sticking landings. The teams that go on will be the ones that find their landings the most. It’s only the first rotation though, and Stanford is the only one to breathe a sigh of relief that beam is behind it.

McCallum (Utah): Y half on half off, shuffling on the landing.

Wiedeman (MSU): Completely off on her series and takes it off the hip. Cat leap to front toss. Good. Tucked gainer full off end, stuck.

Brunette (Stanford): Reminder that this is the THIRD time Stanford is competing this week. Front lay to rudi, great.

Lawson (Stanford): RO 1.5 through to a double tuck and sticks it. Love the leaps, she has such great height. Double pike to close, good.

Bryant (Stanford): Full in to open, sky high. Front tuck through to double pike, just a little shy of being fully rotated. Ends with her open double tuck.

This continues to be a close meet, but please, go ahead and count the number of sticks verse the number of shuffling steps on each landing. MSU had a rough start to beam but recovered pretty well. It’s shaping up to be a one fall per beam rotation meet.

Gutierrez (Stanford): Y 1.5, stuck! Stanford would like to remind everyone it’s close.

Neault (Stanford): Stanford with another stuck vault in the corner of my eye.

Adams (Alabama): BHS LOSO, not an issue.Switch leap to split jump, hits the full split no problem. BHS to 1.5, hops.

Waligora (Alabama): BHS LOSO, leg up. Entire arena gasps since she’s the only one going at the moment. Split jump, tuck full. I really enjoy all of her hand choreo. RO 1.5, just a hop.

Mitchell (MSU): Double tuck to open. Ends with a double pike, chest up.

Hofelich (MSU): Double pike to open, keeps it in. RO 1.5 to front lay. Closes with a double tuck, nearly with a stick there.

Alabama and Utah have established themselves as the top teams going into the final rotation, but MSU would very much like to find itself in one of those coveted positions. For Stanford’s magical season to continue it would need the bar rotation of a lifetime to move on. They did so earlier this week, which would give the Cardinals a 197.475 but could very much not be enough in this absolutely razor-thin and competitive regional.

Garcia (MSU): Caught a hop on the landing.

Hsu (MSU): Ah, great block, really went for the stick but put her knee down.

Hofelich (MSU): Hops on the landing.

Neault (Stanford): Maloney to pak, nice. Slow giant full to double tuck, steps out of it.

Morgan (Utah): Hits her triple series, no issue. Beat side aerial lay full, definitely off center but not an issue.

Burch (Utah): Hits her series. Comes off on her leap series, I think.

Judges having a chat on beam!

Isa (Utah): Candlestick mount to start. BHS LOSO triples series no problem amid the cheering. Beat to straddle quarter, hit. BHS to gainer full off the side, stuck.

Eaker (Utah): Side aerial loso, nothing to her. Switch leap bhs swingdown. Cat leap side aerial to tuck full, stuck!

Olsen (Alabama): Pike full in to open. Closes with a double pike.

Machado (Alabama): Double pike to open, small rebound back on that. Switch leap switch half, nice. Ends with a high double tuck.

Wow! Utah and Alabama will be moving on, for MSU and Stanford the season ends. Not due to any glaring mistakes, either. Stanford had an exceptional push this week, competing three times this week. 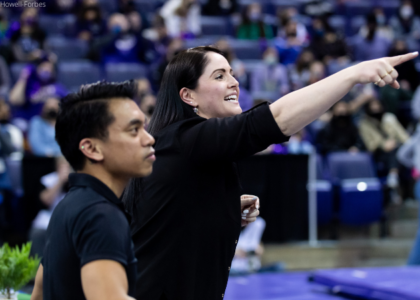 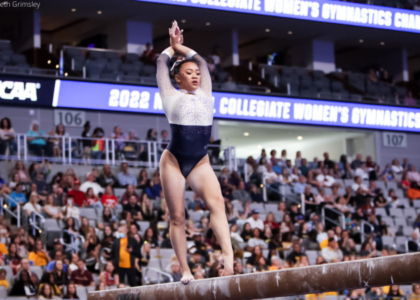