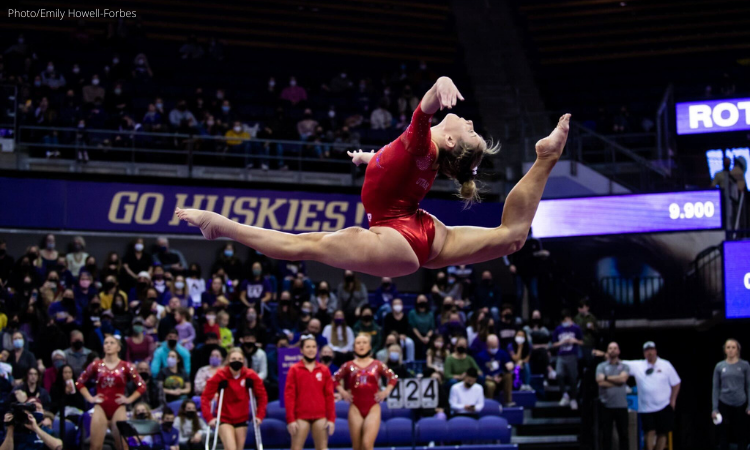 Welcome to the second half of your marathon round two! Most notably, you have a showdown of Olympic teammates, Grace McCallum of Utah and Jade Carey of Oregon State. Utah is the easy pick to win this session, the Utes have been cruising through the season and have an eight-tenths advantage over the Beavers’ NQS. In addition, Utah’s high score is just over a point than Oregon State’s best showing all year. Mostly, Utah doesn’t have much to worry about today. Oregon State, on the other hand, has Illinois right on its beaver tails. If the Illini hit with their 197.350 season high and the Beavers bring their 197.155 NQS, well, Oregon will be packing bags. Adding chaos to the mix will be either Stanford or San Jose State, depending on who won that right yesterday (I wrote this intro in advance, so cut me some slack).

Just to add some pressure, if an individual has a dream of qualifying to nationals should their team not advance, they must top all the scores from session one and session two. No pressure for anyone whatsoever, at all. Your individual qualifiers this session are Emma Morgenthaler (Sacramento, VT), Natalie Hamp (N. Illinois, UB), Clara Colombo (Nebraska, UB), Amber Koeth (Sacramento, BB), Tara Kofmehl (N. Illinois, FX), Megan Ray (UCD, FX). A handful of individuals are dependent on if their team qualified earlier in the week: Kyla Bryant (Stanford, AA), Jada Mazury (SJSU, AA), Madison Kirsch (SJSU, VT), Anapaula Gutierrez (Stanford, VT), Emma Milne (SJSU, BB), and Brenna Neault (Stanford, BB).

Per the above note, we have Stanford who won the right to see today.

Garcia (OSU): Y full with a hop back.

Gutierrez (Stanford): Wolf turn solid. Good series. Little shy on the switch half on beam. RO 1.5 with a hop forward.

Borden (Illinois): Straddle jaeger, good. Caught the end of her twisty dismount, but stuck and gorgeous.

Utah with good vaults but not a ton of solid landings, just yet.

Fall for Illinois on bars.

Gonzales (OSU): Half on back pike off, takes a step, chest down.

Bryant (Stanford): Good series. Love the beat jump to switch split jump, that’ll never get old for me. Hangs onto the front tuck in place with her toes, but great. BHS BHS double tuck, takes a step.

Illinois with a stuck bar routine.

Lawson (Stanford): Arabian, absolutely solid. Cat leap to switch half, little soft in the knees. Sticks the spiked gainer off the end.

It could not be louder. The distraction is real.

Soloski (Utah): Opens with a big double lay but steps out of bounds. Split full in her leap series was gorgeous. RO 1.5 to front lay, nice. Good other than the oob.

Mazury (SJS): Hitch kick to side aerial, love a hitch kick. BHS LOSO, slight balance check. Beat to straddle half, small check. RO 1.5, almost underrotates it looking for the stick and takes a biiiiig step back.

Could it BE any closer?! And you thought the first session today was going to be a cut-and-dry meet.

Less than ideal landing from Rucker on big step back.

Brunette (Stanford): Someone tell me what this floor music is. Great back double full to open. Double tuck, good.

Jakubczyk (OSU): A few errant swings out of the corner of my eye, sticks the double tuck. OSU will want that dropped.

Carey (OSU): Almost over on the first hs, shaposh, Bhardwaj, hops in place on the dismount. Still goes 9.925.

Knight (Illinois): Candlestick mount. Side aerial to bhs, tiniest bit off center but doesn’t show it. Side somi to tuck full, takes a step.

Takekawa (Illinois): Side aerial to bhs, nice. Small bobble on the full turn. Switch leap to straddle 1/4, small check there. BHS to gainer full off side, great routine.

Mazury (SJS): Double pike lands a little low but doesn’t move her feet. Stanford learned the SJSU chant to go with her choreo.

Koeth (Sac State): Backwalkover mount, love it. BHS LOSO and slips off. That’ll be a nice beam burn. Checking things out currently. They’ve called this rotation. Ohhh they called it too early. We’re back up. Split jump to ring, gorgeous. Nerves of steel. Love the tick tock choreo. Her choreo and flexibility is stunning. BHS gainer full and sticks it. The entire arena erupts.

Stanford and Illinois both tied for first going into the third rotation. This meet is getting more and more interesting. Still just three-tenths between all of the teams. Stick with it, East coasters.

McCallum (Utah): Maloney to pak, shy on that hs. Then comes off the bar. Not what Utah wants. Sticks the double tuck, maybe a hop in place.

Gutierrez (Stanford): Y 1.5, good landing, some knees in the air.

Thompson (Utah): Pak, shaposh back up to a piked gienger between the gars. Double lay with a hop.

Gonzales (OSU): Front aerial, leg up. Backs up to repeat. Front aerial soffffft connection, comes off on the side aerial. Step on the landing.

Isa (Utah): Shy on the first hs, good tkatchev. Bail to hs, nice. Shy on the last one. Giant full to double lay, wobbbbblees in the knees but doesn’t move her feet. Utah survives bars.

Dagen (OSU): BHS LOSO, leg up but fixes it and stays on. Switch leap series, good. Side aerial to lay full, little hop, could be a college stick.

Knight (Illinois): FHS front double full to open. Good double tuck, takes a step forward out of it. RO 1.5 to front lay, gets it around fine.

Townes (Illinois): RO 1.5 to front full, she flooooaaats that front full. Little wonky in the leap series but hits her splits.

Well, we shuffled a bit. And closed the gap even more. Just .15 separates all of these teams. Which is BANANAS.

Bird (OSU): Big double pike to open, nice. Front lay front full. This rotation is going to be close to the end.

We still haven’t vaulted yet.

Great routine from Bird on floor.

Brunette sticks her dismount on bars.

Burch (Utah): Excellent series. Sticks her gainer full off the side.

Isa (Utah): BHS LOSO LOSO, great. Beat to straddle quarter, not a problem. BHS to gainer full off side, sticks it.

Bryant (Stanford): Everything looked good from the corner of my eye, hops into the salute on her double lay.

Simons (Illinois): Way to cap off the rotation with that good lay full.

Widner (Stanford): Tkatchev nice. Bail to hs so good. Just shy on that last hs. Smallest of hops in the double tuck.

Eaker (Utah): Side aerial to loso, solid. Switch leap to bhs swing down. Cat leap to side aerial to tuck full, sticks it.

Carey (OSU): Opens with the double double, good. Front full to front lay to split jump, good use of rebound with that jump. Closes with a double tuck, could’ve called that stuck but took the college allotted step for finesse.

O’Keefe (Utah): Excellent series while everyone was cheering at the end of Carey’s routine. Switch leap to leap, good. Crowd booing the floor judges. Cat leap to side aerail to lay full, STUCK.

Whoops, off by one on this OSU floor rotation. I’ll fix that.

Kofmehl (NIU): Great routine, ends with a double tuck and a step back.