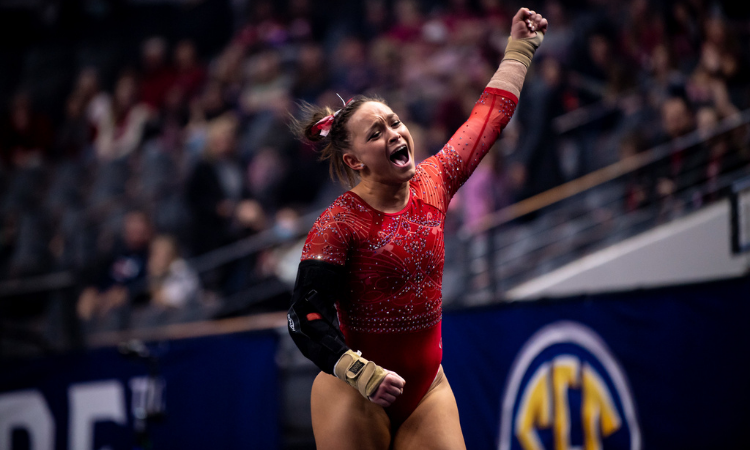 Next up is the Norman regional. Wednesday will feature No. 31 West Virginia and No. 32 Arizona in round one. Thursday we jump into round two action with No. 8 Minnesota, No. 9 California, No. 24 Boise State and No. 25 Utah State competing in the afternoon session and No. 1 Oklahoma, No. 16 Arizona State, No. 18 Arkansas and the winner of round one in the evening session. Two teams from each of these Thursday competitions will advance to round three on Saturday where the top two from that meet make it to nationals.

West Virginia had a strong back half of the season after a slower start, hitting over 196 in each of its last six meets to secure its spot at regionals. Floor has been the event where the Mountaineers truly shined, scoring as high as 49.525. There has been some inconsistency on bars and beam, but the floor squad has been able to make up the difference on most occasions. Arizona is another team strongly dependent on its floor score, but not quite to the extent of West Virginia. Vault and bars have not been consistently surpassing the 49 mark, but each have been on the rise in recent weeks. Consistency is on Arizona’s side, proving slow and steady can indeed win the race.

If West Virginia brings its top-level floor performances and manages to hit five-for-six on bars and beam, the Mountaineers should come out on top here. Although West Virginia is the higher seed coming into this matchup and reached its season high most recently at the conference championship, it should be noted that it’s Arizona that enters the meet with the highest documented score of the year at 196.850. This is likely to be a meet that comes down to the last rotation, or better yet, the last routine. Both teams will be looking to maximize scoring potential through the first two events to put themselves in the best position to close the meet on top.

Kendra Combs has evolved into a rock of an all-around performer for the Mountaineers in her senior season. Her sky-high tumbling and entertaining dance are can’t-miss gymnastics. Abbie Pierson’s vault is always impressive but even more so if she adds her Yurchenko one and a half back for postseason. She’s gone as high as 9.950 earlier this season but downgraded to a full after a midseason concussion. Malia Hargrove is an athlete on the rise, having her best season in her career thus far.

Minnesota enters this round with the top seed but also the most disappointing finish at the conference championship. Beam has been a question mark all season long for the Gophers, and Big Tens highlighted the lack of consistency on that event. In contrast, Utah State is the lowest seed but also the only competitor to have earned a conference championship, scoring over 197 for the first time this season to take the MRGC title. This is a hungry team that’s peaking at just the right time. Both Boise State and California came in second at their respective conference championships. Boise, unlike most teams, has been led by its bars squad all season long. California has been alternating between outstanding and middle-of-the-road performances. Taking a share of the Pac-12 regular season title for the first time in history thanks to upsetting Utah was definitely a highlight.

After Minnesota’s showing at the Big Ten championship, the door of upset hope is definitely open in this session. However, if the Gophers have even a regular beam performance, it can quickly weed out the other team’s chances. California is obviously the first choice for a team capable of surpassing Minnesota, but it will need to find a few more vault landings than it has been to give itself the best chance. Boise State and Utah State will likely have to rely on the higher ranked teams making some mistakes, but both are capable of capitalizing with season highs in the 197s.

Minnesota has a trio of 10.0-worthy athletes in Lexy Ramler, Ona Loper and Mya Hooten. Ramler’s bars and beam mix perfect lines and artistry, Loper’s vault is among the best in the country and Mya Hooten’s floor brings sky high tumbling that she tends to stick cold. Boise State also has some 10-worth athletes, with Alexis Stokes and Emily Muhlenhaupt both pushing that boundary with 9.975s on bars this season. California’s trio of all-arounders, led by defending bars national champion Maya Bordas, will be forces to reckon with as Andi Li can also challenge for nationals spots on anything but vault should the Golden Bears not advance. Utah State’s Brie Clark makes this regional deep on floor, with her garnering All-American status on the event in the regular season.

Outside of teams likely to qualify to nationals, the vault field in Norman is relatively weak. Ball State’s Suki Pfister, who has gone 9.950 this season on her explosive front handspring pike half, could find her way into the nationals field with a stuck vault.

The Sooners begin the 2022 postseason as not only regional, but national title favorites after earning the highest NQS in NCAA history. As the home team, Oklahoma should have no problem advancing to the regional final. Arizona State, despite a fifth-place finish at the Pac-12 championship, hung onto the final seed for regionals after a season in which it won a share of the Pac-12 regular season title and beat powerhouse UCLA for the first time in 21 years. Injuries have taken a toll on Arkansas this season, but after a rocky middle of the season the Razorbacks’ scores are trending up at just the right time.

Holding an NQS and average score over a point higher than any other team in the session, Oklahoma needs just an average performance (by its standards) to move on to the final. The battle for the second spot, however, should be competitive. The Sun Devils are one of the most consistent teams but have had trouble on floor at times this season and also lack in vault difficulty. If scores are close heading into the final rotation, Arkansas has the potential to put up big numbers on its best event, vault, that could overcome Arizona State should it have an off day again on floor. Arizona, should it qualify for this session, could also play spoiler having already upset No. 4 Utah earlier this season.

Oklahoma boasts a whopping five gymnasts who’ve earned a perfect 10 this season and an additional three who’ve come just a quarter tenth short. Jordan Bowers, who earned a 10 on vault, has been a standout freshman for the Sooners this year while Ragan Smith and Audrey Davis continue to rank amongst the best in the nation on beam and bars, respectively. Arizona State’s Hannah Scharf ranks 13th nationally in the all-around, the highest of any gymnast in this session, and has been complimented well all season by freshman Alex Theodorou, whose unique vault is one of the few 10.0 start values the Sun Devils compete on the event. The Razorbacks also claim an impressive freshman in Leah Smith, whose powerful tumbling rivals teammate Bailey Lovett’s, who is a star on beam and floor.

Angelica Labat has already shown that she’s capable of qualifying to nationals, winning the 2021 regional championship on vault. She qualified out of a field that included Oklahoma, the No. 3 vault team in the country at the time. Labat and Laster have both stuck several Yurchenko one and a halves this season. Most recently, Laster stuck her vault cold to take the MIC conference title. Penn State’s Lauren Bridgens faces a tough field on bars, but she has received a 10.0 on the event in her career.

Should all four seeded programs advance to the final, we will be treated to a fierce competition for two spots to nationals between three teams who qualified last season—Oklahoma, California and Minnesota—and the first team to miss, Arizona State. The Sun Devils have already bested the Golden Bears once head-to-head this season, and the Gophers have been upset on multiple occasions, making it anyone’s guess as to who will join the Sooners in heading south to Fort Worth.