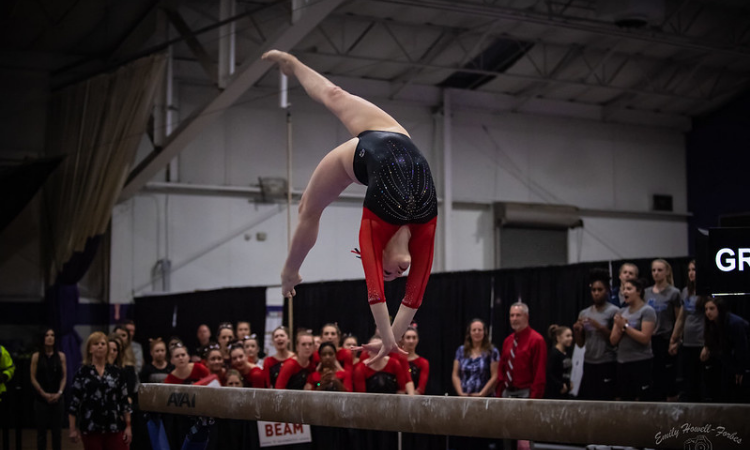 With this first session, today begins the inaugural Gymnastics East Conference championship, a new change from the ECAC championships that have been held, and for once, bringing together the two divisions of the ECAC. Don’t forget William & Mary and Bridgeport almost weren’t here this year due to programs being eliminated, so this first full season with a fully stacked conference and no programs lost is something notable already.

Of these four teams, Cornell ranks highest, but the Big Red sit just seventh tenths ahead of Southern Connecticut. The Owls haven’t notched a season high since mid-February and Cornell is riding a season high from just last week, a high that crushed its earlier score by over a point and a half. Should Cornell hit, it’s at a huge advantage. To put that much-needed pressure on Cornell, Southern Connecticut needs to wrangle its bar demons and put them to bed, once and for all. Just within arm’s length is William & Mary, less than a point from the Owls, ready to strike and itself atop a podium. As for Bridgeport, the Purple Knights probably won’t find themselves with any team hardware this weekend, but rather, want to go out on a high note. With nothing to lose, Bridgeport gains a wealth of experience today without any of the pressure. But sometimes, those are the moments when people really shine.

Swam my way to Providence today! Gymnasts are being announced now.

Vault is perfectly behind me over my left shoulder so I’ll be doing my best owl impression to bring you vault.

Warm-ups are underway with just over 2 minutes to go.

You can find live scores here.

Gwinn (Bridgeport): Looks like just a layout flyaway to end.

Burkhart (SCSU): Opens with a strong double tuck, steps out. Whip to double full, just some ankles. Good leaps. 1.5 to front half, major bounce on the rebound.

Kuper (W&M): Layout yurchenko, super clean from this angle, just a step back.

Judges took a while to chat on floor. And bars.

Doran (Bridgeport): Piked jaeger good, bail to hs just floats into hs. Hits every hs so far. Sticks her double tuck. That’ll be big, for sure.

Cornell started strong on beam, just one fall in the second routine but the rest of the lineup went 9.625 or higher so that lineup DELIVERED. SCSU had a big floor rotation but scoring is super tight here, as evidenced by Kat Doran’s 9.825 on bars when that was a dream. W&M showed up strong on vault to stay within a reach of SCSU and SCSU is within a single step of Cornell. That’ll be a new season high for Cornell on beam today and SCSU on floor, too.

Walsh (Cornell): Front tuck step out through to double tuck, good. Enjoying this pop music. Double pike, takes a step back and keeps it in it seems. Switch ring series, good height.

Wiley (W&M): A little shy on the last hs. Giant full to double tuck, sticks it.

Huang (W&M): Piked gienger, free hip bail to hs a little wiggly there. Ends with a double lay, has a hop.

Brady (Cornell): Front tuck through to double tuck, seems she kept it in. Great leap. Her popa is out of the world and should be the new standard. Little short on the double pike but keeps it on her feet. Good routine overall.

Cornell only recorded scores 9.500 on floor and from what I saw, William & Mary only missed one routine on bars today (edit: two!) but even with that it should be new season high for the Tribe there. Bridgeport only counted scores over 9.600 for a great beam rotation. SCSU dominated vault, scoring a new season and record high, I believe.

Watson (Cornell): FTY, slightly pikes it down but clean overall.

Richardson (UB): Sky high double tuck, good. Keeps her 1.5 to front tuck on her foot after landing a little low.

Wiley (W&M): Solid routine. Great front toss, just a few steps on the gainer full off the side.

Carpenter (W&M): BHS LOSO takes a few steps back but keeps it on. Leap series a little wobbly but made the connection. Beat to straddle 3/4, puts her chest down.

Looks like I’m one off on the W&M this rotation. That should be fixed.

This should be a new season high for Cornell on vault, and they just flirted with the record by just over a tenth. Bridgeport had an unusual floor rotation but they’re putting it together pretty well today. That bar rotation was definitely a season high for the Owls. William & Mary may not have set a record on beam but they fought for every last skill.

Javinett (UB): Opens with a fhs so Bridgeport can have a team score here today. Super clean, btw.

Carpenter (W&M): Opening pass looked good out of the corner of my eye. Double pike had good height, chest up on the landing.

Michelini (Cornell): Pak, good. A little shy on the hs, fights to get over before the dismount, takes a few steps on the double tuck.

Kuper (W&M): Double pike, a little low and takes a step. A little soft in the feet on the jumps. 1.5 to front lay, good.

Campbell (W&M): Her tumbling looks so easy and floaty. That was a beautiful routine.

Schafer (W&M): Super high double pike, chest slightly down. Front lay to rudi, stuck. Switch side to popa, good. Everything she does is bouncy. RO 1.5 to front lay, so clean. Loved the choreo with her team.

Lee (SCSU): Small wobble on the full turn. Front toss to sissone to switch half, good. Front aerial swing it around to connect to her bhs. Front gainer full, good.

Southern swept past Cornell by the slimmest of margins in the last rotation, by just 0.025. Razor-thin. The Owls had themselves a MEET, with new season and program records, ultimately smashing the previous team record by nearly a point and a half! Cornell had a great meet, having to count a score in the low 9s that last rotation definitely threw a wrench into things today. Not to be left out, the Tribe toppled a few season highs as well. Bridgeport left it all on the floor with a roster of just seven healthy gymnasts, and Kiana Session is currently sitting at the top of the all around after this session.