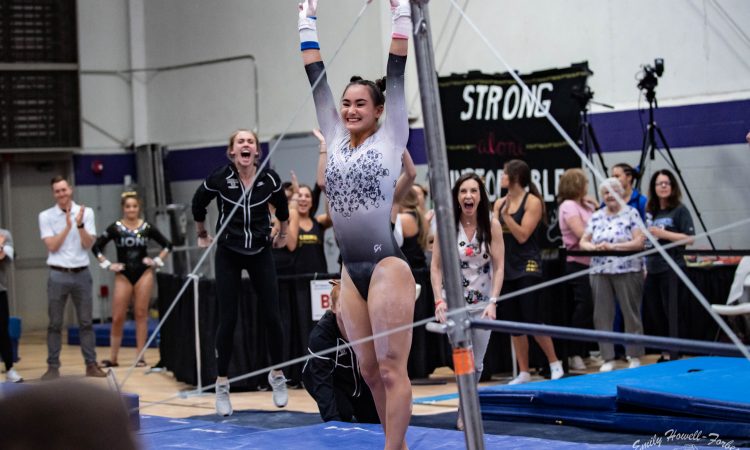 Smashing records and season highs was the theme of the week in the USAG. The top teams have ensured they won’t be going anywhere anytime soon. Lindenwood continues to defend against Air Force and Yale, with West Chester eyeing its own spot in the top three. Week six will not be the time to rest on laurels. NQS is right around the corner, and with it comes the gut-wrenching switch to dropping season highs. Some positional shuffling occurred in the middle of the pack, most notably Bridgeport sliding down to 11th. Bridgeport’s ranking will not tell the whole story for weeks to come as the Purple Knights were forced to only use four athletes on two events this week after struggling with injuries.

ASMR Pass of the Week

Jessica Meakim’s front handspring front full to front layout soothes everything that could be wrong in your life. Burnt your dinner? Watch her tumble. Wet socks? Nothing can bother you with this pass on repeat. Now excuse us as we drift off to sleep with our Meakim nightlight.

Record Breaker of the Week

What’s better than breaking a school bars record? Breaking it twice. Mei Li Costa is the ultimate bars star, the best in Brown gymnastics history. But don’t take our word for it, see for yourself.

With the loss of several strong floor workers, including former USAG national champion Tyler Davis, it was unclear what the Falcons’ top six would look like this season. However, the team put up another 49-plus this week led by a 9.900 from Cameo Stapleton. The three freshmen in the lineup are settling in nicely, and the returners are stepping up their game.

Lindenwood and UW-Whitewater at Northern Illinois

Update 2/3: SEMO withdrew due to inclement weather in the Missouri area.

The Big Storyline: Lindenwood led Whitewater by just half a tenth after two rotations. The Warhawks posted a season high team score while Lindenwood managed a decent score despite counting a mistake on bars. Northern Illinois casually earned a season high of its own.

Implications: The top three NCGA teams are going to be in a tight race for No. 1. Whitewater will move into third place for now after posting the second highest score of any Division III team this season. Brockport is the front runner thus far. To keep up, Whitewater will need to replicate this performance meet after meet. Lindenwood’s performance tonight will have little effect on its season average, but its top ranking should be safe for the time being. However, with Air Force hot on its tail, Lindenwood will need to pick it back up to the 195 range.

Records: Northern Illinois’ 196.300 is its highest score in program history. Richella Velarmino of Whitewater posted a 9.825 on bars for a new career high.

The Big Storyline: Despite a three and a half tenth lead heading into the final rotation, Air Force narrowly missed the conference victory thanks to a 49.225 from Sacramento State on floor.

Implications: Air Force posted its highest away meet score of the season. The Falcons proved that they can still bring in the big scores on the road. Air Force has firmly situated itself in the second position in the USAG, but Lindenwood’s lower score this week could mean an open door for the Falcons in the near future. Sacramento State’s 194.225 was its highest score of the season by nearly two points. This meet demonstrated the competitiveness of the MPSF. The conference championships are going to be exciting this year!

Records: Genevieve Sabado continued her rise to stardom by posting a 39.300 all-around led by a 9.875 on floor. Sabado was closely followed by fellow freshman Ayla McKean with a 39.100.

The Big Storyline: West Chester continued to prove its consistency but Bridgeport had a few hiccups.

Implications: West Chester took home the team title, notching its second-highest score and its second score over a 193 so far this season, holding tight to its third place ranking in the USAG division. Brown should see itself creep up a spot into seventh, otherwise holding in eighth as well. Mei Li Costa led the charge for the Bears, as they tallied a season-high 192.875. Brown has improved nearly a point and a half each on vault and beam since the start of the season. Cortland scored its own season-high of 182.800, helped by Kamryn Rodriguez and adding nearly three points to its opening score of the season. Despite Bridgeport’s six-for-six on beam, it unfortunately only put up four on vault and bars, missing freshman Alyssa Wiggins, presumably to injury, dropping Bridgeport into last place in USAG and GEC.

Records: Mei Li Costa’s 9.925 is not only a new personal high but a program record for Brown on bars.

The Big Storyline: Penn went over 193.000 for the fourth meet in a row as Cornell tied its high score of the season.

Implications: Penn continues to defend its first-place standing in the GEC, holding off West Chester. Cornell’s consistency proves it is competitive enough to potentially crack the top three in the GEC if any of the teams above it begin to falter. With a few lower scores on floor to smooth out before the next meet, Cornell could look to cruise up the rankings if it pieces things together like it has on bars.

For a small fee, international viewers can watch the meet here.

The Big Storyline: Yale brought home the victory in its senior day celebration. Senior Seina Cho got the opportunity to exhibition two events at her final home meet.

Implications: Here come the Bulldogs! After posting its second score over 194 in the last two weeks, it’s safe to say that Yale means business. Tentatively, Yale moves to second in the conference and third in USAG. The 194 mark seems to be the threshold that separates the good teams from the great ones in the USAG this year. The Bulldogs counted two falls today, so they haven’t even reached their ceiling. Southern Connecticut State was en route to a team season high until difficulties on beam in the final rotation derailed its efforts. The Owls are definitely still in the process of figuring out which six on its 38-woman roster are going to compete the most consistently on each event. However, SCSU put its exhibition spots to good use to help expedite that process.

Implications: SEMO’s team performance this weekend might signify a turning point for the 2022 season. Led by a near-49 beam total, each event looked much closer to what we’ve come accustomed to when watching the Redhawks. However, it should be noted that the team only put up five athletes on bars this weekend, so depth is still something to be concerned about. This week shows that SEMO has the talent to contend with the top teams in the USAG. Arkansas will be happy to add another 197-plus to its season average, especially after the rest of the SEC put up huge totals in week five. However, the Razorbacks will still sit seventh in the conference after this weekend. The SEC competition is even tighter than normal, so the Razorbacks will have to get closer to the mid-197s to make another push for the night session of conference championship.

Records: Kennedy Hambrick tied the Arkansas beam record previously set by Sophia Carter with a 9.975. Jolie Miller tied her career high on bars with a 9.875.

The meet will be streamed on Bally Sports Oklahoma+

Implications: Oklahoma will hold onto its No. 2 spot in the country, narrowly holding off a surging Utah team. With two scores over 198 in a row, the Sooners are silencing the naysayers who thought the team didn’t have what it takes to contend for the title this year. Audrey Davis and Ragan Smith stole the show today, but Oklahoma will want to make some improvements on vault from this week to stay in the race. The Sooners will not be able to so heavily rely on the strength of the other events forever. TWU brought the heat, unbothered by getting iced in earlier this week. Led by season highs on bars and beam, the Pioneers were able to inch closer to the top five in the USAG rankings. Hopefully the hot-and-cold meets are over for TWU and the season will continue to go up from here.

Records: Audrey Davis tied her career high 9.975 on bars while Ragan Smith posted career highs on beam and floor with a 10.0 and 9.975, respectively. Kat LeVasseur tallied a 9.975 of her own to get a career high on beam.

Controversies: We sound like a broken record, but why is the second-best team in the country being streamed on such obscure streaming services?