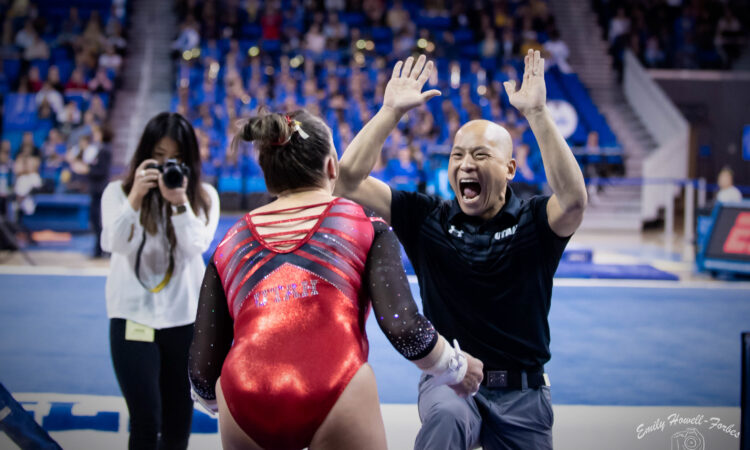 Are you as shocked as I am to see a quad meet from which nobody has withdrawn due to COVID protocols yet? Am I tempting fate by even mentioning such a thing in a live blog intro? So far, the chaos that has swept the Pac-12 seems to have spared Utah—but if there are a few unexplained absences today in any team’s lineups, don’t be shocked.

Utah looked great at its Red Rocks Preview in December, and it’ll be very interesting to see how prepared the 10.0 SV vaults look and whether any lineup changes have been made since that time. If there’s going to be a trouble spot for Utah, it’s bars: Some returning routines have trouble spots that we’ve known about for years, and some new ones have excess difficulty that may or may not wow the judges enough to outweigh the additional risk.

Meanwhile, BYU is one of few teams in the country to actually graduate a lot of important routines, so its lineups and readiness are a bit of a mystery. Southern Utah, on the other end of the spectrum, published prospective lineups that show 19 of 24 routines coming from seniors or fifth years. Utah State had a great year in 2021 but stands to improve even more with the addition of COVID opt-out Sofi Sullivan and star freshman Brie Clark, whose Biles I on floor is can’t-miss.

Millar (BYU): Double pike, well controlled. Front layout front full. There are so many songs in this floor music that I can’t even keep up with identifying them. Double back low and underrotated, step forward with relatively low drama. 9.775

Brooks (USU): FTY, lower and a bit pikey, holds the stick for a second and then just pulls her heels. Nice! 9.7.

Nipp (SUU): Good Jaeger, just slightly soft in the back which is normal to her, double lay with a step. 9.85

C. Kho (SUU): Slightly shy first handstand, Maloney to Pak with leg separation throughout. Toe on to FTDB kind of pings off the bar with a hop. 9.825

Wells (USU): Super FTY stuck. Fought for it a bit, her weight was a touch forward, but she worked it out. 9.75

Bentley (SUU): Toe on to Ray to overshoot, super clean. She was a breakout star last year. Missed a KCH, double layout stuck-ish. 9.8

Murakami (SUU): Thank goodness she gets to anchor. Higgins to Jaeger to overshoot, good, FTDB with a tiny step. Being late in the lineup will pay for her later on. 9.85

Paulson (UU): Side aerial LOSO, not sure where to place the second foot but works it out. Switch split tentative, full turn, FALLS ONTO BEAM ON CHOREO, ummm ok? Split leap side aerial back full. 9.425

I doubt that’s the final order for Utah on beam but it’s a very solid first outing. Utah State vault struck me as a little stingy and the commentators agree. BYU is coping well with extreme personnel challenges and SUU bars has been strong for a while and still was.

Murakami (SUU): Full turn, BHS LOSO BHS a little tentative but made. Split to sheep, right in line. Side aerial tuck back full stuck! Awesome start. SUU beam can get a little hairy so an emphatic lead off is very valued. 9.85

Paulson (SUU): Front through 2.5, well landed, good front combo. One and a half front lay well landed. She’s a great lead off choice, these passes are so comfortable for her. 9.875

Gutierrez (USU): Maloney to bail, little bits of knees and feet visible, double lay with leg separation and a hop. 9.725

Smith (SUU): Round off LOSO, check, tour jete half with another step. This routine is just so hard. Beat jump, good dismount series.

Stanhope (UU): Missed the first part of this one, double back, good leaps, one and a half front lay. SUPER control on the landings today, Utah is definitely ready. 9.625 I obviously missed something important oops

Wells (USU): Tkachev to overshoot, toe on to FTDB, a little low but she gets it around with a substantial hop. 9.725

Dudley (BYU): FTY, really solid! How much depth does BYU have… The freshmen are coping so well with the pressure of so many routines being missing. 9.725

McClain (SUU): BHS LOSO, bend check and falls. Cat leap side aerial. Another fall. One and a half dismount solid but that’s definitely a drop score. 8.45. Commentators predicted “about 8.5” so credit for that.

Benson (BYU): FTY, hop in place! This lineup is doing so well with the pressure. 9.8

Eaker (UU): Triple twist, scoot back, way better than it was at RRP. Fully rotated today. Switch ring switch half, little cute assemble situation into the corner, one and a half front full slightly underrotated with a bit of knee swivel but she made it. 9.8

Nipp (SUU): Front aerial to beat. BHS LOSO great. Gainer full off the side with a cross step backwards. 9.775

Fishwick (USU): Maloney to bail, slightly flat feet throughout but not offensive, blind to double front with chest forward and a big step forward. 9.675

Soloski (UU): Double lay, switch half split full. I love her little sheep position flutter kick thing, such a trademark now. One and a half front lay well controlled. 9.825, this is definitely a humbug situation.

Very interesting battle shaping up between USU, which is a generally strong bars team, and SUU, which pretty much hates beam all of the time. Commentators interviewed SUU head coach Scotty Bauman in the rotation break and you could just tell it was taking all his effort to avoid saying “bro we just do this” when she asked how they would recover from a counted fall on beam to be good on floor. SUU just does this. It’s fine.

Schwartze (SUU): Front double full. Tour jete half wolf full. Rudi LOSO well controlled. Gonna be honest, I didn’t realize that was the end of the routine until she wandered off the floor to meet her teemates.

Barron (BYU) Toe on to Ray to bail, that awkward 135 degree position, stalder to toe front 1/2 stuck but with feet substantially apart.

Wells (USU): Side aerial, switch tour jete 1/4 with a check. BHS LOSO with another check. Side aerial back full stuck.

McClain (SUU): Why would you put my girl in the 2 spot. It’s OK, I trust Scotty. Great double pike, one and a half front lay. Switch half split full, iffy positions. Double tuck landed well again. Should be a good one.

Hunter (BYU): Tkachev, bit of flexed feet but aggressive handstands… maybe a bit too aggressive there… made the bail. Double lay with a little hop back.

Rucker (UU): One and a half CLEAN but with a medium step forward. 9.9

Burch (UU): One and a half, rotated perfectly, little hop forward with feet apart. 9.85

Bramblett (BYU): I didn’t know BYU had a gymnast named Bramblett??? Jaeger to overshoot, gets her legs together fast, great, double layout with a hop in place. Wow. 9.825

Sullivan (USU): Front aerial back pike, aggressive and great. Switch back tuck. She pretty much wants the beam dead. Full turn, one and a half twist stuck. COVID year who? 9.85

Utah has this obviously but will stay a little short of the Michigan/Florida opening meet scores. SUU did not recover super well from its challenging beam rotation, but there’s some excitement still to come on vault.

Toomey (USU): Front double full, slightly underrotated, pretty sure this routine is Uma Thurman by Fall Out Boy? One and a half front full landed well. 9.85

Thompson (UU): Pak, Maloney to Geinger, very pretty, dismount SUPER underrotated and holds it for a second before hopping a lot. 9.8

Paulson (UU): Maloney to Pak, blind full to double back RIGHT on her toes but stuck. You can hear her yelp a little on the broadcast audio which is super sweet. 9.85

Alfaro (SUU): FTY, huge but bounce in place, her usual. If you didn’t get her on fantasy that’s on you!!!

Clark (USU): Double layout, no Biles I today but she nailed what she did. Tour jete half Popa, good. Two and a half front tuck WOW, fantastic, USU will get crazy value off that routine. 9.925

McClelland (BYU): Double wolf, BHS LOSO off line but she arrests it HARD with her arms. BHS 3/2 tuck, step back, that routine has a lot of potential as an anchor.

Pitou (BYU): BHS LOSO with a minor check, cat leap switch side with another check. Switch to gainer full stuck. 9.7

Solid start for Utah, but a little bit of work on landings is needed to keep up with the Michigan/Florida frontrunner situation that’s become fairly clear already. Let’s hope that Kara Eaker is all right and not concussed. Utah State had a great start but has substantial room to grow. BYU has a lot of COVID and I’m not planning on judging the team score based on that, while SUU is much the same team we’ve watched for the past few years but didn’t have the best night tonight.