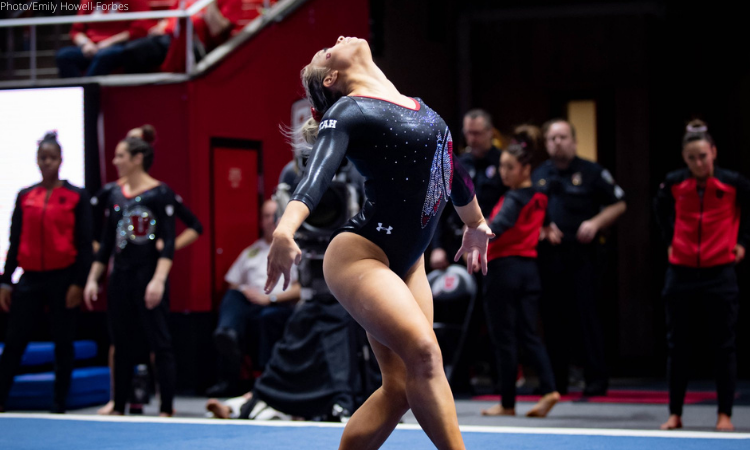 Today we’re talking the question on everyone’s minds. With so many good seniors returning for fifth years and a plethora of phenomenal freshmen, there are so many good teams capable of standing atop the podium come April.

Which Team Will Win the NCAA Title?

Elizabeth: Normally there are a couple of front runners with realistic shots at the title. But this year it feels like upwards of six teams could realistically be hoisting the trophy in April. I’ll admit, in my preseason poll I chose Florida to win. I just think that team has the most talent on its roster. However, for this question I’m actually going to say Utah. It just feels like the Utes’ year after 20 seasons of not quite making it.

Carolyn: Of course I have to say the same thing that I did in my preseason poll: Utah! It is going to be SO talented this year, and I can’t wait.

Emily M: Well, I said Utah in my poll. But there’s also Florida hanging out right there! Not to mention LSU’s megateam and reigning champs Michigan, plus Oklahoma’s crop of really excellent freshmen. (The Sooners get my early vote for favorite bar lineup in the country.) It’s going to be a cutthroat year at the top. I’m going to go against my poll vote because I’m so torn on this. Florida.

Brandis: I am going to back up my preseason poll and give Michigan the nod right now as my favorite to win the title. The reigning champions return enough of their roster and have the championship experience to two-peat in my eyes.

Katherine: I’ll also stand by my preseason poll champion and say Oklahoma. The Sooners looked exactly as we’d expect in their preview meet, and that was without Olivia Trautman and much-anticipated freshmen Moorea Linker and Danielle Sievers. Counting Oklahoma out isn’t the move.

Allison: I like chaos, I like surprise, I like Arkansas. Is it dramatic? Yes. It’s a Cinderella story dream, but I think Arkansas could come sweeping in and surprise everyone. With 2022, hopefully, being a season with every team back and ready to fight, I think Arkansas will keep their heads down and deliver.

Ryan: To avoid a headache, I’ll go with my preseason pick Florida. I think this squad will be on fire after a couple seasons of disappointment and will have a great mix of experienced returners and talented newcomers. If the Gators can stay healthy and in the zone, they’ll be pretty hard to beat.

Tara: This is HARD. I know, I know, I said Michigan in my preseason poll. The Wolverines do indeed look good from what we’ve seen in preseason, but I’m not counting Utah out either (or Florida or Oklahoma for that matter). Something just feels right there—a legacy program that hasn’t won in a long time, has a stellar crop of talent and has the drive to make it happen—yet at the same time there’s so much talent on what should be the top four teams in 2022 that it’s hard to pick just one.

Talitha: Competition will be fierce, but Michigan can definitely do it again. It’s the team that will have the least amount of changes to its lineups compared to last year, and it will not have to rely on inexperienced former elite freshmen. Plus, the Wolverines must have a new fire inside their bellies after last season’s victory. It can be a winning combination.

Katie W: I’m sticking with my preseason poll choice of Florida. The Gators have depth on their team this year with a largely talented freshman class and the return of both Megan Skaggas and Alyssa Baumann.

Rebecca: I understand why Michigan fans feel that the Wolverines are an obvious pick with zero routines lost from their championship team, but keep in mind that at the intrasquad the freshman class only contributed two exhibition routines while other teams have gained far more (and also lost nothing). Moreover, with Carly Bauman out for the season and Nicoletta Koulos AWOL, the depth situation at Michigan is TIGHT.  For me, the biggest takeaway from the Michigan championship run is that a talented team with a history of stumbling in postseason can turn it around anytime, and that reasoning favors Florida more than anyone.