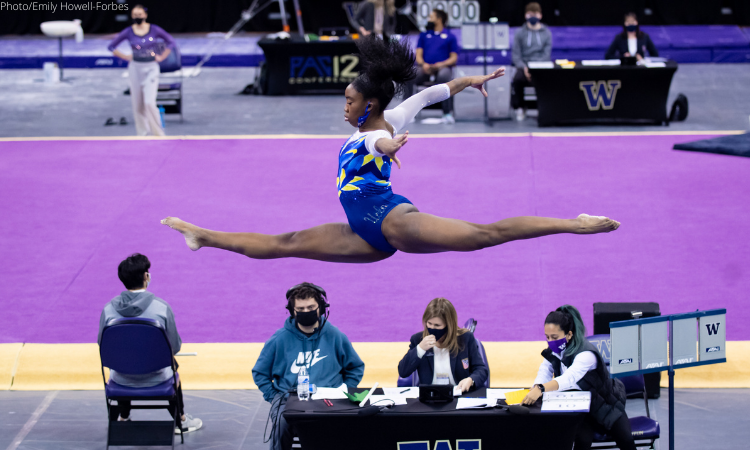 Last year Anastasia Webb was our choice, and you know how that turned out. An alternate title for this question could be which gymnast is underrated now but will get the attention she deserves in 2022 and thus make everyone at CGN look like a genius. Or something like that—just spit balling here.

Who Is the Most Underrated Gymnast in the Country?

Elizabeth: I know she’s coming off a national championship with Michigan and regularly scores over 39.600 in the all around, but it still feels like Sierra Brooks isn’t appreciated enough in the wider gymternet. She should be praised alongside the likes of Trinity Thomas and Lexy Ramler. Maybe 2022 is the year.

Carolyn: For me, that is a tie between Maryland’s Audrey Barber and Alabama’s Luisa Blanco, but I ultimately have to go with Blanco. Both are tremendous all arounders that always help their team out and don’t always get the recognition they deserve.

Emily M: Several weeks ago I would’ve said Shaylah Scott; moment of silence for her retirement, please. Today, I’ll say Chae Campbell. UCLA has so much big talent and big personality that I thought she was a little overlooked at times in 2021. We just don’t see too many freshmen with all around highs over 39.600, not to mention doing it with so much flair and grace.

Brandis: For someone who notched a 10 on beam and finished the season ranked fourth in the all around, I don’t hear Luisa Blanco’s name as much as I should.

Allison: Absolutely Luisa Blanco. Why she isn’t on everything NCAA gymnastics all the time baffles me.

Ryan: I’m going to have to go with Maile O’Keefe. She’s often left out of the all around conversation because she doesn’t perform a 10.0 vault, but she’s an incredible competitor and deserves to be recognized alongside the nation’s best.

Rebecca: I also have to go with Luisa Blanco here. I think she has a very good chance to become the clear No. 2 all arounder in the country this year behind Trinity Thomas.

Tara: Abby Heiskell played a critical role in Michigan’s national championship, but big names like Natalie Wojcik often outshine her. She’s stellar on three events and could even break more consistently into the all around.

Talitha: I agree with Tara that Abby Heiskell was the unsung hero of last year’s team final: She scored over 9.900 on all four events, leading off the team on three of them and anchoring beam to clutch victory for the Wolverines. In this preseason’s mock-meet, she looked equally sharp, especially on vault and bars. The sky’s the limit.

Katie W: Luisa Blanco’s name is not talked about enough. She gets overshadowed by fellow SEC conference all arounders, but I would not be surprised if she comes away with an NCAA all around champion title before she graduates.