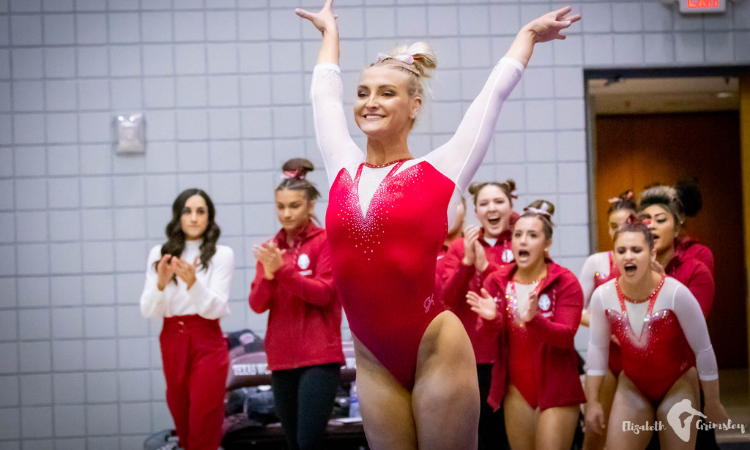 After a historic 2021 season, things continue to look promising for Arkansas. With a large class of incoming freshmen—highlighted by former 4-star recruit and Nastia Liukin Cup champion Leah Smith—the team adds depth to every lineup. Head coach Jordyn Wieber says “this is probably one of the most talented Arkansas gymnastics teams I’ve ever seen.”

“I love when it’s tough for me to choose the lineups,” Wieber explained in a Zoom press conference on Thursday. The increased depth on all four events should allow for more opportunity to rest gymnasts throughout the season and give newcomers competition experience. She noted that the Razorbacks will at least start the season with more experienced athletes anchoring each event. “You know what to expect when you put them in the lineup,” Wieber said of her veterans. “We still need to get that information from some of our freshmen.”

Though Smith is the best known of the class, Wieber said that former 4-star recruit Makenzie Sedlacek “is going to shock a lot of people,” with her talents, especially her “huge” Yurchenko one and a half vault and full-twisting double tuck on floor. Former 3-star recruit Kalyxta Gamiao is another freshman to look out for. “When you watch her on beam, it’s like you’re at the spa,” Wieber laughed. “It’s graceful, it’s steady, it’s easygoing, but at the same time she has a standing layout layout series, which is really hard.”

The balance between the large freshman and senior classes has created an interesting dynamic on the team. “We have both a veteran and rookie team at the same time,” Wieber explained. Maggie O’Hara and Sarah Shaffer, graduate students using their extra COVID year, have been important leaders on the team. Wieber also highlighted Bailey Lovett’s leadership. “When she speaks up, the team listens.”

Since Wieber came on as head coach, she put an effort into promoting the team and increasing the fanbase. This year, the Razorbacks will face Auburn—and Olympic all around champion Sunisa Lee—in Bud Walton Arena on Jan. 14. A meet in Bud Walton, traditionally used for men’s basketball, has been in the works since Wieber’s first year. The goal is to draw 10,000 fans. Meets are usually held in the smaller Barnhill Arena, which Arkansas was able to fill to capacity in 2020 before the season was canceled due to COVID. Wieber predicted that the team’s fanbase will soon “outgrow Barnhill.”

Wieber chose the Auburn meet as the one to host in Bud Walton because the teams have been close in their last matchups. In 2020, Auburn beat Arkansas at home, but last year, Arkansas broke a program record score competing at Auburn. Of course, having Lee there will be “really exciting” as well. Though only one will actually be competing, fans will get to see three Olympic gold medalists that night. Wieber and volunteer assistant coach Kyla Ross won gold as  teammates at the London Games.

Between a meet at Bud Walton and the debut of a talented freshman class, the already record-breaking 2021 team is hungry to face the competition in the upcoming season. “There’s so much potential with this team,” Wieber said. 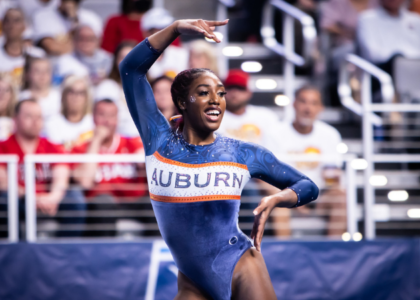