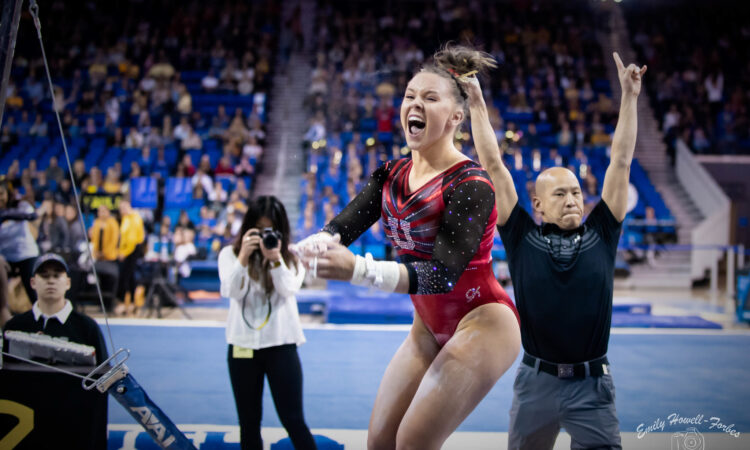 Utah is one of the last championship contenders to have its intrasquad, and with a televised format and historically high performance quality, expect all eyes to be on the Red Rocks tonight. As with any intrasquad, our biggest questions relate to the Utes’ freshmen: Will Kara Eaker have a beam construction that will allow her to contend for a 10.0 this season? Will the fatigue from Grace McCallum and Amelie Morgan’s long 2021 affect their readiness for the 2022 college season? After a level 10 career repeatedly interrupted by injury, what will Sage Thompson have to offer for the Utes?

We’ll be paying particular attention to vault and bars, which were the two events that held Utah back in the earlier parts of the 2021 season. Several underclassmen should be able to add to the Utes’ tally of four returning 10.0 SV vaults, but the landing quality is an open question. Only two Utes passed the 9.900 mark on bars in 2021, and we’ve heard Kara Eaker isn’t quite ready to contribute on that event due to some shoulder stiffness. Will the other three freshmen be difference-makers on these events, or will returners like Alani Sabado grow to meet their potential?

Finally, sophomore Jaylene Gilstrap and junior Jillian Hoffman were limited by injury last year. Head coach Tom Farden reports that they’re both fit and ready to go, but we’re not sure how many routines each will be ready to contribute tonight.

OK, first thing we see tonight is that Gilstrap is in a boot. Good progress.

As with many intrasquads, you can expect the first six routines on each event to be the presumed lineup and the seventh and beyond to be contenders.

We’re getting lots of disclaimers about how not everyone will be at full difficulty. Yada yada.

Hoffman: FTY, long and open, a midsize slow step back.

Hall: FTY, high and bouncy, flies back and caught by Coach Pratt. That’s the plan for tonight, she’s still doing her 1.5 in training, they’re just choosing not to push it.

Stanhope: FTY, much the same as Hall’s, potentially slightly cleaner through the legs.

McCallum: Whoa, Ivantcheva! That’s a Yurchenko half on half off tucked. Flexed feet, the form is very visible.

Rucker: Utah’s strongest vaulter by my count. MASSIVE full, tangibly more block than anyone else thus far, bounces back into the coach as previous.

Burch: FTY, bounce back into coach, you know the routine, piked down a little compared to Rucker.

Isa: FTY, this is her actual planned vault, piked down but very nearly stuck with just a heel shuffle. Good option for the days the 10.0s are a bit temperamental.

Sabado: FTY, piked down, chest a little low and step back. It’s a little higher than Isa’s but I still prefer Isa slightly.

Morgan: Maloney to Bhardwaj with leg separation and foot form throughout. Blind full double back with flexed feet and a step back.

Thompson: Pak, kip, Maloney to Gienger lovely. Not sure if this is the most strategic routine but it is very, very clean. Double layout with the babiest of baby hops you can imagine.

Paulson: Maloney a little shapey to lovely Pak, blind full double back and a slightly unbalanced stick. The kind where they’re just really excited to step and salute.

McCallum: Ricna to Pak with leg separation, stalder to van Leeuwen. Misses the handstand on the high bar, you can see the flexed feet on the giants here, FTDB with sizable hop.

Isa: Ray, the usual one slightly flexed feet and ever so slightly muscley casts, good bail, blind full to double lay with a hop.

O’Keefe: Maloney to Pak, baby leg separations, slightly arched back during the half pirouette on the low bar. Double arabian stuck DEAD. Her consistency on that dismount is one of the craziest things in college gymnastics to me.

Burch: Into the bonus routines now. Hop change to Jaeger with flexed feet, clean bail. Arched a handstand on the high bar, double lay with a step back.

Sabado: Missed the first handstand, blind to piked Jaeger, leg separation on the bail. Misses the timing on her double layout and it comes in low with soft position and a stumble forward.

Morgan: RO-BHS mount onto the beam directly connected to LOSO. That’s freaking RISKY but cool. Sideways split half to split. That’s a very elite beam series too. Full turn, side aerial back full dismount with some flexed feet visible in flight. That is an incredibly gutsy lead off choice.

Randall: Full turn, BHS LOSO with a little adjustment, confident switch + straddle 1/4, OWWW she was off on the Rulfova and landed fully on one thigh but hauled it back onto the beam. One and a half twist with a substantial side step.

Isa: I don’t remember if Utah is a team where the girls pick their own beam music but if so she’s an absolute legend for picking Primadonna by Marina. Candle mount. Made the triple series, straddle straddle 1/4, gainer full off the side high and beautiful.

O’Keefe: The anchor, as it were. Walkover mount lovely as usual, side aerial LOSO, slightly wobbly. “Everyone thought this would be a national championship beam routine last year” might be slightly overselling the case, great as it is. Made leap series, full turn. Beat jump side aerial back full stuck.

McCallum: Candle mount, double wolf turn, when I tell you my stomach sank watching her set that up… Weird choreography, bit of a check, side aerial LOSO with lots of visible knees and feet. Split to switch, AWKWARD dynamics on that connection, flexed feet, short of split, major check. Side aerial back full with a hop.

Stanhope: Full turn, slight adjustment. Kochetkova to BHS is VERY shaky but she manages to feel her way through it. Switch to split. Good 1.5 dismount.

Paulson: Front through 2.5 big and bouncy. Front lay front full better controlled. Tour jete half to split. One and a half front lay with the classic choreographed turn out.

Rucker: FTDB short, lunge goes forward, but chest stays up. It’s early, no sweat. Tour jete half to straddle eehhhhhhh? No idea what the rotation on that was meant to be. Front lay front full is good.

Eaker: Triple twist, no idea about the form because we were zoomed too far in, a touch underrotated and steps it around. Her movement quality is spectacular. Switch ring (yes it’s fine, her rings on floor always were, shhhh) to switch half. Another twisting pass I missed because of funky camera work. Oh, it’s a one and a half front full.

McCallum: Super, super underrotated full in with two big steps forward. Ambiguous positions on her leaps. Front lay to Rudi, flexed feet and a stumble back.

O’Keefe: Double pike, overrotated but contains the damage well, switch to tour jete full. Double wolf, one of the better ones.

Soloski: She’s just such a blast to watch. Double layout the usual slight touch of knees but well controlled. Kara’s trying to dance and put her pants on at the same time. Switch half split full. Front lay front full. Still got her trademark flutter kick sheep choreography. One and a half front lay. Honestly this exact routine was borderline 10able.

Randall: Queen routine! Full in, spotted by Tom, comes in a touch low. Switch side Popa wolf full. One and a half front lay with a flicker of leg form but well landed.

Stanhope: Full in, spotted by Tom but might not have needed it, chest up with great lunge. Double tuck, well controlled again. You do see the flexed feet there. Switch side wolf full, slightly crunchy feet again.

I just tweeted my thoughts on what we saw here, so here’s that.

There’s so much talent on this team and you can see the outlines of a team that COULD win a championship. You can also see the possibility that some of these freshman routines never quite come together or that judges just don’t like some of the difficulty. Utah will certainly be one of the top teams in the country in 2022 and is a heavy favorite to make Final Four again, but is this formula the right one to take the Utes over the edge to a championship? We’ll have to wait and see.

READ THIS NEXT: LIVE BLOG: UCLA Meet the Bruins