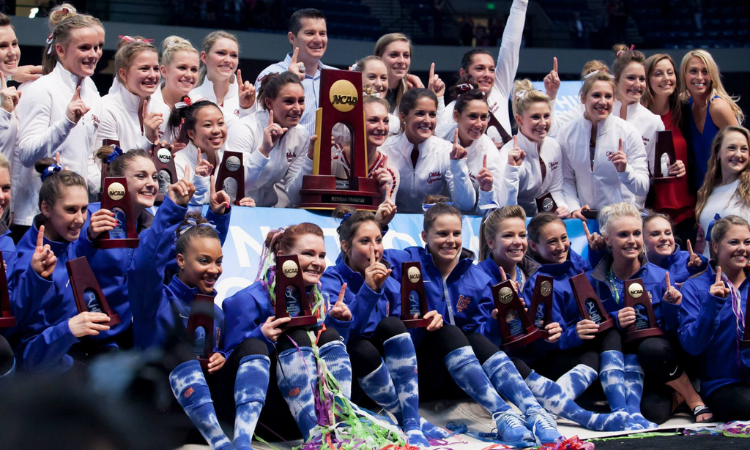 When teams tie in gymnastics, it’s a marvelous thing. After hundreds of different flips, twists, sticks and deductions, for two schools to both notch the same score is almost unthinkable. However, for many it can also be frustrating, as it’s easy to let your mind wander to what little thing could have made the difference to put one team on top.

When I think of ties, my mind immediately jumps to the 2014 NCAA championship, where Oklahoma and Florida both put on stellar performances to become the first and only teams to ever tie for the NCAA team title. There’s no doubt that both of these programs earned the title, the first for Oklahoma and only second for Florida, tying with a 198.175 to also be the first schools to win a score of 198-plus in a decade. Neither team had a fall, and it was actually so tight between both schools that when adding up all six scores on each event, the Gators edged the Sooners by only a quarter tenth. With how incredibly close this meet was throughout, I took a look back at the meet, let my mind wander and found some spots where I theoretically think either of our champion teams could have potentially separated itself to win the 2014 NCAA title outright.

The most expected, obvious, but also necessary answer. Unless a team sticks every landing in all 24 routines, steps and hops are always going to be easy places to point out where teams left winning tenths on the table.

Unfortunately, the broadcast didn’t show every single routine from Florida and Oklahoma, but when looking at what we were able to see, both teams left the door open in regards to sticks. Adding to the theme of tying, both teams stuck approximately two-thirds of their landings (included were vault, bars and beam dismounts and floor tumbling passes), meaning that each team had around eight routines where just a stick could have propelled it to a solo victory. Despite sticking at the same rate, the Sooners and Gators had different means of getting there. Florida stuck to the average in sticking roughly four of six landings on each event, whereas Oklahoma nailed just about every bar dismount and floor pass but couldn’t quite glue its feet to the ground enough on vault or when dismounting beam.

It would be remiss to discuss a mid-2010’s meet involving Florida without bringing up its infamous floor lineup strategy, especially when it’s relevant. In the 2014 Super Six and throughout most of the season, Florida opted to have Kytra Hunter go fifth in the lineup and have Bridgette Caquatto anchor despite Hunter being objectively better at floor. The strategy of head coach Rhonda Faehn was to play into the judges’ likelihood to throw bigger scores toward the end of lineups, and this controversial strategy has been tried by many programs in the years since.

In this championship, Faehn’s strategy certainly paid off with Caquatto notching a 9.950 as Hunter did before her to earn the exact score the Gators needed to tie the Sooners for the title. While successful, if scores truly do build or inflate toward the end of lineups, isn’t it best to put the best gymnasts in the anchor spot to earn the highest score possible? Caquatto’s season high of 9.950 on floor ranked only fourth among that year’s Gators behind Rachel Spicer’s 9.975 and Hunter’s and Bridget Sloan’s 10s. There’s no certainty that switching up the lineup would boost scores, and there’s a good chance Florida wouldn’t have even tied for the championship with a different lineup order, but putting one of the nation’s premier floor workers in the anchor spot could’ve given the Gators that extra quarter-tenth it needed to clinch outright.

Prior to the vault difficulty shakeup of 2016, the college gymnastics world was ruled by Yurchenko fulls, with the 2014 championship being no exception. Both of our champion teams vaulted five Yurchenko fulls, with Oklahoma leading off with Madison Mooring’s Yurchenko half and Florida anchoring with Hunter’s Yurchenko one and a half. All of these vaults started from a 10.0, so it’s understandable as to why neither coach would be pushing for added difficulty in a system that didn’t reward it appropriately, but more standout vaults could have given either team the edge it needed to claim the title outright.

While there’s no hard data evidence suggesting that more difficult vaults in the pre-2016 era received higher scores, the gymternet’s popular opinion seemed to indicate that might have been true at times. When looking at Florida’s vault scores from the 2014 Super Six, the judges seem to have been making the same statement. Hunter’s more difficult Yurchenko one and a half with a small hop scored the same 9.950 as Bridget Sloan’s stuck Yurchenko full before her, inferring that had Hunter stuck her vault, she could have received a perfect 10. Overall, the vault judges that day were stingy, giving no vault a perfect 10 (one individual judge gave out 10s to Alabama’s Kaitlyn Clark and Oklahoma’s Chayse Capps), but we also didn’t see any stuck vaults more difficult than a Yurchenko full.

It’s impossible to know at the time of the championship who on each team was capable of adding at least an extra half twist to their Yurchenko fulls, but it’s not hard to speculate who might have been. Sloan kept to a Yurchenko full throughout college despite vaulting Yurchenko doubles in her elite career, likely due to injury, but in theory had the ability to vault something greater than a full. Oklahoma’s final routine of the 2014 championship was a nearly stuck Yurchenko full from Haley Scaman, who later went on to vault a Yurchenko one and a half after the code devalued the full. If either team had taken the gamble to upgrade vaults in hopes of a stick and a 10.0, we might have only had one champion.

What did I miss? Let us know in the comments and on social media how you think either team could’ve pulled it out!

READ THIS NEXT: Alternative History: What If Alabama Won the 2013 National Championship?