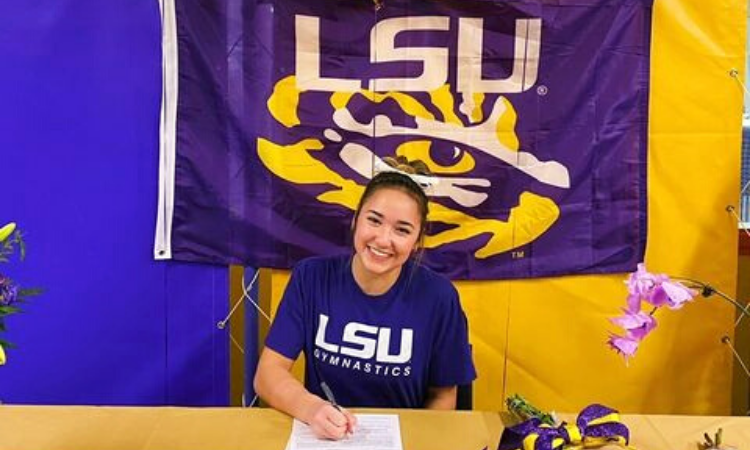 It’s day two of the U.S. gymnastics championships in Fort Worth, Texas. At the end of the competition, all eyes are on the Olympic hopefuls who just punched their ticket to the Olympic Trials and will get a chance to be named to the U.S. team for the Tokyo Olympics.

In one corner of the arena, however, one gymnast is shying away from the intrusive lights and cameras, trying to process what until two days ago was unthinkable: She hasn’t qualified to the Olympic Trials, she will not get a chance of making the Olympic team and her elite career, for which she’s sacrificed so much, is suddenly over.

Aleah Finnegan is not one among many. She’s a national team member and a Pan American Games gold medalist. And two weeks before nationals she placed fifth in the all around at the GK U.S. Classic. At nationals, though, a series of mistakes left her in 23rd place, way below the top 17 athletes who ended up qualifying to the Olympic Trials.

“In gymnastics you don’t really have more than one shot to be perfect, and I was trying so hard not to give away the little things,” Finnegan said, reflecting on her performance at nationals. “I was trying to be a little bit too much of a perfectionist, and then one [event] after the other I was stressing myself out more and created a series of events that weren’t too great for me.”

Finnegan’s heartbreak was in part due to the fact that her shot at the Olympic Games this year had the taste of an unexpected second chance. Indeed, had the Olympics taken place in 2020 as planned, she wouldn’t have been able to contend for a place on the team.

From the late summer of 2019, Finnegan had to face a series of trying circumstances. In early August, her father Don Finnegan passed away after years of battling cancer, leaving her and her family devastated. At the time, Finnegan was coming off the best elite competitions of her career, winning gold at the Pan American Games and finishing fourth on vault at the U.S. championships only three weeks earlier. The contrasting emotions were very hard for her to process. “I was coming off a very good season, so I was really shifting in my brain—it makes you wake up a little bit,” Finnegan said. “He always was such a big supporter of me—he came to every one of my meets—so that was really hard on myself and my family.”

After taking time to grieve, Finnegan began to prepare for the Olympic season. Training was going well when in February her foot started bothering her. A medical scan revealed a bone fracture that required immediate surgery if she wanted to do gymnastics ever again. “I was like, ‘This is the worst possible timing, everything is not going well, this was not supposed to be how this year was going to go,’” Finnegan said.

She was left with no choice but to undergo surgery, knowing that it meant that her Olympic dreams were over. As an LSU commit in the class of 2021, she was given the option to start college a year early, and she was starting to consider her post-elite gymnastics career when COVID struck and the Olympics were postponed. “I was like, ‘This is crazy. What are the odds?’” Finnegan said. “I could have rested up and gone to college one year early, but I was like, ‘I’ve come this far, why quit now?’ So I decided to use that extra year to heal up, take my time and really push myself to the best of my abilities for next year.”

By the time the Olympic season finally came about, Finnegan had recovered from surgery, gained most of her skills back and set her personal goals, which included qualifying to the Olympic Trials. Failing to achieve that goal left her “shocked” to the point that she can barely remember what happened in the aftermath of the competition. “They would say that it’s going to be the top six automatic and then they would select the other people that they think should go to Trials,” Finnegan said. “When I heard that they took the top 17, I was frustrated, I was angry, I was confused. I was feeling all these emotions at once—I almost shut down.”

“I was like, ‘Oh my gosh, my season is over. This is it, point blank, it’s over,’” she added. “I was just heartbroken because it’s something you’re so close to getting, but it’s out of your reach; I felt I was pulled away from it. But I’m sure it shall get better.”

It will likely get better very soon, as Finnegan leaves for Baton Rouge next month to join the LSU team, the same team for which her sister Sarah, an NCAA champion and 2012 Olympic alternate, competed from 2016 to 2019.

Sarah was instrumental in Aleah’s choice of both pursuing an elite career and joining LSU. Aleah was still a child when Sarah qualified elite, and witnessing her life as an elite gymnast—from small things like packing for a meet to seeing her compete internationally—prompted Aleah to follow in her footsteps. “I was like, ‘This is really cool, she’s competing in front of all these different people. She gets to go to all these different countries, and that’s something I want to do, too,’” she said.

The fact that Sarah was a big name in the sport also pushed Aleah to set high goals for herself in order to be recognized for her own accomplishments and not only for being Sarah’s little sister. The comparison didn’t really bother her, though. “In general I take it as a compliment. But sometimes, especially when I first qualified elite, it was like, ‘Sister of 2012 [Olympic] alternate qualified elite,’ and I was like, ‘My name’s Aleah, hey…’ So that’s where I wanted to really make a name for myself.”

“A lot of people think that I got into LSU because of my sister or qualified elite because of my sister,” Finnegan added. “But she has no say in anything. She’s onto bigger and better things. She’s way past her gymnastics life. Everything that has happened, I’ve worked for it. It wasn’t just given to me.”

While Aleah wasn’t handed a scholarship because of her sister, Sarah’s experience as a Tiger played a crucial role in Aleah’s decision to attend the same school. She’d visited other colleges before committing, she explained, but she wasn’t swayed by any of them. “When you go to colleges, they tell you all these glamorous things, but I really got to see an inside scoop about what LSU was really about, and I loved it. So I decided that that’s where I want to go,” she said.

Of LSU, Finnegan likes the campus and the beautiful gym, but most of all she loves the coaching staff. She’s especially close to head coach Jay Clark who, she said, “really has my best interest at heart and is really excited for me to get down there. He always checks up on me, and that’s really special to me. So having that connection with him already, even before I’ve even gotten to campus, really makes it that much better.”

Since Aleah committed to LSU, the coaching staff has changed almost entirely, as long-time head coach D-D Breaux and assistant coach Bob Moore retired and volunteer assistant coach Ashleigh Clare-Kearney Thigpen has left the gymnastics team for another opportunity in the athletic department.

When Breaux retired in 2020, Finnegan said, “I was obviously really upset because D-D is an amazing person, but I knew that Jay was going to stay on as head coach, and I was really comfortable with that.” When Moore and Clare-Kearney Thigpen left the team last month, however, she was initially overwhelmed with all the changes. In the end, though, she herself could not have picked better hires in Garrett Griffeth and Courtney McCool Griffeth. Indeed, Finnegan knows McCool Griffeth well, as the 2004 Olympian was a gymnast at GAGE, the same gym where Finnegan trains.

“Courtney McCool went to my gym, and she would come in to say hi when I was about 10 years old. I’ve known Courtney for a very long time, and I absolutely love her. I love her personality, her energy, everything about her,” Finnegan said. “So at first I was a little bit confused as to why they were changing all the coaching staff, but I’m really excited for all the new that is going to come this season.”

Finnegan is especially looking forward to competing in the PMAC for the first time next January “because the energy in there is absolutely crazy,” as well as sharing the experience with her teammates. The current seniors, she said, “[are] all so great. They’re open with me, and they’re always like, ‘Let me know if you need anything.’ I can already tell that they’ve got my back.”

Finnegan hasn’t set individual goals for herself yet, but she hopes to continue to compete her piked Deltchev on bars “because I feel like I tied my name to that skill, and it’s really fun to do. It’s something different—you don’t really see them every day.”

She knows exactly what the main team goal is going to be, though: winning the program’s first national championship title. “I want to help LSU to be the best that we can be,” Finnegan said. “They’ve been with our family through the deep end, and I want to repay them in any way that I can.”

As she’s about to leave for Baton Rouge, Finnegan is still trying to process and overcome the disappointing ending to her elite career. She still believes, nevertheless, that her whole journey, with its good and bad moments, was worth it.

“Overall,” she added, “I’m really proud of myself, of how I did this season, and I’m ready for the next chapter.”