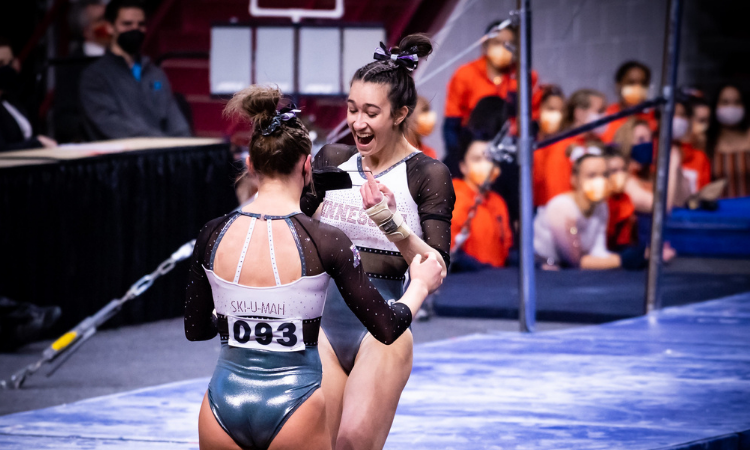 With the Olympics quickly approaching and the rising number of elite gymnasts taking their talents to the NCAA, we thought we’d take the time to talk about the lessons elite gymnastics could learn from college. If you asked collegiate gymnasts their favorite thing about college gymnastics in comparison to club, a majority of them would say that it’s more fun because of the team dynamic. Since that one is a given, we’ll going to stray away from the generic “elites need to have more fun” argument (although over the last year, it does seem like the tide is starting to turn there). But don’t be fooled: The more college level celebrations in the elite world, the better!

Perfect Form Is not a Lost Art

With the emphasis on increasing difficulty in elite gymnastics, oftentimes form and technique fall by the wayside. This isn’t true for every elite, but generally the mentality is “let’s throw the big skills to increase our D and hope it’s enough so deductions won’t matter.” We don’t blame them. That’s the game. But we do miss the days of watching elites without worrying of seeing scary, ankle-crunching double layouts on floor or questionable leg form on beam. The 10.0 system has its faults, but it does its job when it comes to forcing college gymnasts to at least think about the details. There’s a higher risk associated with competing E skills if the judges can take more deductions than what the skill is worth. So all the E skills we see performed in college are executed to perfection—perfect height, perfect legs, perfect feet. Take MyKayla Skinner’s double double at Utah. You can’t convince us all those stuck landings at Olympic Trials didn’t have a little Tom Farden written all over them. Let’s see that level of detail make its way back to elite gymnastics.

We know elite music typically tends to be more somber, but we’re going to state the obvious here… “This is ARTISTIC gymnastics!” With that being said, floor routines should have some level of artistic flair. College gymnasts are allowed to let loose in their floor routines and embody their personality through their performance. This makes it inherently easier to have more expression through dance because they’re having fun. Doing four passes is hard, but we hate seeing the gymnasts looking sad or unamused between every skill. A little expression every now and then wouldn’t hurt. The floor choreography shouldn’t just show off the gymnasts’ athletic strengths but allow for self expression and draw in the crowd as well. Floor is supposed to be a complete performance. That includes tumbling, leaps, dance and artistic expression. It’s an aspect that college gymnastics has mastered and elite has lost along the path to increase difficulty.

The difference between college and elite training hours are astronomical. College gymnastics training is cut off at 20 hours a week while many elites train upward of 32 to 40 hours a week. The shorter training hours force college gymnasts to prioritize time spent in the gym. There is more emphasis placed on the quality of each turn rather than cranking out the numbers—quality over quantity. If elite training could find a balance between quality gymnastics and not overworking its athletes to get there, maybe there would be more elites whose bodies can survive long enough to thrive in the NCAA and even beyond.

One of the major perks of college gymnastics is dual meets. The alternating routine format allows for every routine to be seen both live and on TV. The more routines the better! After recent complaints from the gymternet about the lack of routines aired, alternating could be an immediate fix. Especially during meets where there are less gymnasts competing, this could be a way to increase the number of routines seen without increasing the total time of the meet.

The Little Guys Need Love Too

There should be more emphasis on telling the stories of not only the big names but all those competing on elite stage. In college gymnastics broadcasts, commentators love to throw in facts about individual gymnasts whether they’re a newcomer or a fifth year competitor. These facts may seem random, but they’re the beginning a story for each athlete, and it gives the viewer something to remember the individual athlete by or something to relate to. Every gymnast has their own story to tell; how are people supposed to come to love a gymnast if they never get to hear about them? Elite gymnastics could take notes from this college gymnastics tradition by using more of its air time to tell the audience the story of someone we’ve never heard of before, so we can all find a new gymnast to love in addition to all the others on our list. Imagine if the NBC viewers knew about Emily Lee having to work two jobs to support her elite career. She’d be more than a niche favorite now even despite not making the Olympic team.

Give Us the Deets

In general, the graphics used in elite gymnastics broadcasts can be more confusing than helpful to the casual gymnastics viewer. Honestly, we still don’t even know what the green, yellow and red shapes mean that pop up next to scores; they seem to change every Olympic cycle. However, the graphics used in college gymnastics give viewers far more useful information that never changes meaning. During many college meets, especially Friday Night Heights, before each routine, a pop-up box shows the name of the gymnast along with pertinent statistics, such as average score on the event or even a fun fact like their major or hometown. Heck, when Makenna Merrell-Giles got married, some broadcasts even showed her wedding pictures. Details like these can help the audience get to know the gymnasts more and find a new gymnast to love in addition to all the other big names we know already. Plus, imagine handstand protractors for all those that finish past vertical!

Wolf Turns Should Be Used Sparingly

We saved the best for last. The latest elite code of points made it possible for the wolf turn trend to run rampant throughout the sport. Are you even an elite if you don’t have at least one wolf turn on beam or floor? The problem is not the wolf turn itself, but perhaps the execution. In college, the risk of the wolf turn scares enough people off, so only the ones with the best technique survive. California’s Kyana George has a wolf turn worth watching on repeat, and we could stand to see a few more like that in elite gymnastics.

READ THIS NEXT: After Elite Heartbreak, Aleah Finnegan Is Ready For Fresh Start at LSU