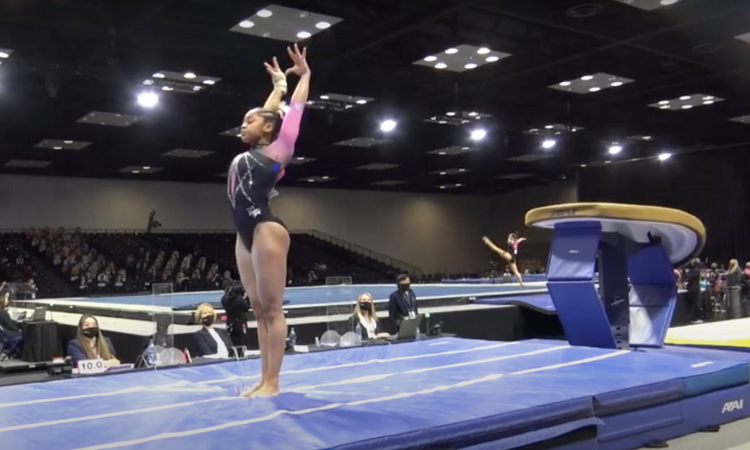 The most anticipated series is back! We looked at the data for each incoming level 10 freshman on each event to see which gymnasts are at the top of their class across the apparatuses and in the all around. This week we’re looking at the top 10 vaults for 2022.

We ranked every single level 10 gymnast from the class of 2021 by a modified average score. To calculate this, we took scores from the last three level 10 seasons (beginning in November 2018), dropped the single highest score and any scores that are extremely low (like ones that you’d expect from balks or injuries mid-routine—not falls) and averaged the rest. We didn’t include athletes with fewer than six scores on a certain event over the past three years.

If you’re wondering where elites like Jordan Chiles are, don’t worry! We’ll be reprising our most anticipated elite freshmen series later in the summer.

Alabama is one of a select few teams to have competed an entire lineup of 10.0 vaults, though the results last season were inconsistent. The GIF below is from January 2020, but Paradise’s scores in 2021 have been higher, so she may have worked through the small form issues and low amplitude we see here. The Crimson Tide will be glad to have another solid Yurchenko 1.5 to choose from.

The nation’s top-ranked vault team just got even deeper on the event with the addition of Vore’s Yurchenko 1.5. Not only does she get plenty of amplitude, but she also has very clean landings; nearly every video we found featured either a stick or only a slight hop. She tore her Achilles in early 2021, though, so the Wolverines may be cautious with her in her freshman year.

Like Vore, Dekanoidze has mastered the landing of her Yurchenko 1.5. She will have an immediate effect at UNC, who ranked No. 39 in the nation on vault in 2021.

Lauzon’s Yurchenko 1.5 is high and clean, with a high stick rate from the videos we could find. She will be a welcome addition to Cal’s lineup, which did well in 2021 but relied on execution over difficulty.

Price competes a Yurchenko full that is high, clean and beautifully flared. She has trained the vault with an extra half twist in the past, but she probably won’t need to upgrade to score 9.9-plus in college. She’s coming back from an ACL tear that occurred just before nationals last April, so we may not get to see it in 2022 just yet.

Johnson has another gorgeous Yurchenko full, which would make an excellent leadoff vault for LSU. The height she achieves off her block is reminiscent of Haleigh Bryant’s front pike half.

Moore’s Yurchenko 1.5 isn’t perfectly clean in the air, but her height is incredible and she has an uncanny ability to stick the landing.

Moore and Celestine together will surely make up the last two spots in Missouri’s lineup in 2022, but it’s anyone’s guess which one will be the anchor. Celestine’s Yurchenko 1.5 is dynamic and stickable, and perhaps slightly cleaner in the air than Moore’s.

Hubbard gets a ton of distance on her Yurchenko 1.5 and has achieved two 10.000s and five scores above 9.900 in the last two seasons. She’ll easily join Drew Watson and Derrian Gobourne in the back half of Auburn’s lineup in 2022.

Blakely stormed into level 10 competition in 2021 after retiring from elite, dominating most of the meets she competed in. Her Yurchenko 1.5 is powerful and clean in the air; we couldn’t find any videos of stuck landings, but given her four scores of at least 9.900 we’re sure she’s fully capable of sticking. Florida’s roster will be loaded in 2022, but it’s hard to imagine we won’t see Blakely in this lineup.

READ THIS NEXT: Underrated Recruits in the Class of 2022 That Excel on Vault