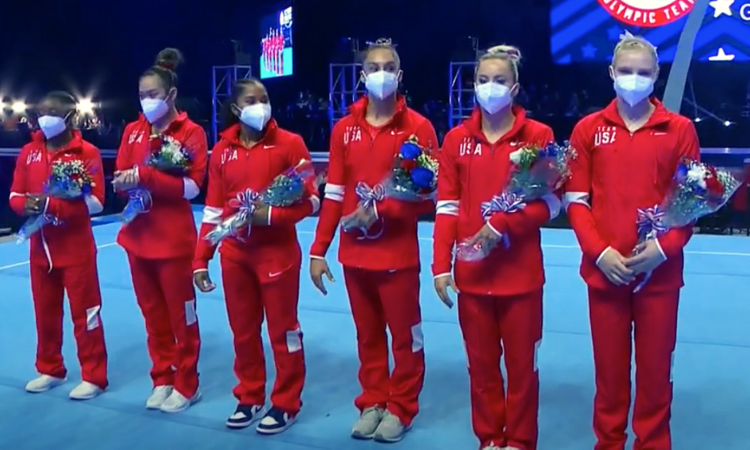 This is Simone Biles’ second Olympic Games. After winning four golds and a bronze medal in Rio, she’s expected to repeat the feat, if not to improve upon it. Biles, who’s widely considered the greatest gymnast of all time, has a lot of records to her name, including the most world championship medals (25), the female gymnast with most world all around titles (five) and most U.S. titles (seven).

World champion Lee has the crucial quality of peaking at the right time, and the Olympic Trials were no exception. On day two she posted a huge 58.166, beating even Biles. Her strong all around performance makes her a favorite to win Olympic gold on bars, as well as a medal in the all around, on beam and floor. She will be Auburn’s first ever Olympian in gymnastics.

Chiles turned senior in 2017 but never made a world team. This year, however, she looked like a completely different gymnast—confident, consistent and polished. After placing third in the all around at both nationals and Trials, she became a lock for the team. She will be one of two incoming Bruins, together with Canada’s Brooklyn Moors, to compete at the Tokyo Olympics. UCLA will also be represented in Tokyo by alumna Danusia Francis.

World champion McCallum was named the fourth member of the team after a neck-and-neck competition with Skinner. After finishing fifth in the all around to Skinner’s fourth place on day one, McCallum had a stellar performance on day two, edging Skinner for fourth and proving to be a reliable all arounder who could be used by the team on any event she is needed.

Skinner herself had her moment of glory, though, being awarded the individual spot after serving as the alternate to the Olympic team in 2016. She will battle for a place in the vault final with the other individual qualifier, Carey.

McCallum and Skinner are Utah’s seventh and eighth gymnasts to compete at the Olympics. The last one was Nansy Damianova for Canada in 2008.

World champion Carey earned her Olympic pass through the individual world cup route. She competed only one vault at Trials, but she’s expected to bring back a second at the Olympics to try and qualify for the final. She is Oregon State’s third gymnast to ever compete at the Olympic Games and first American.

There was a lot of joy among the alternates, too. After a shaky performance on day one, Wong had the meet of her life on day two, exactly when it mattered. Malabuyo defied all odds and plenty of injuries to become an unexpected Olympic alternate. Eaker proved to be much more than a beam specialist, and for DiCello, who turned senior in 2020, put in a strong all around performance as well.

Unfortunately, it was a disappointing night for Florida signee Riley McCusker. The bars specialist seemed a favorite for the individual spot, but a fall on day two jeopardized her chances to be named.

READ THIS NEXT: Last Week in College Gym: June 28