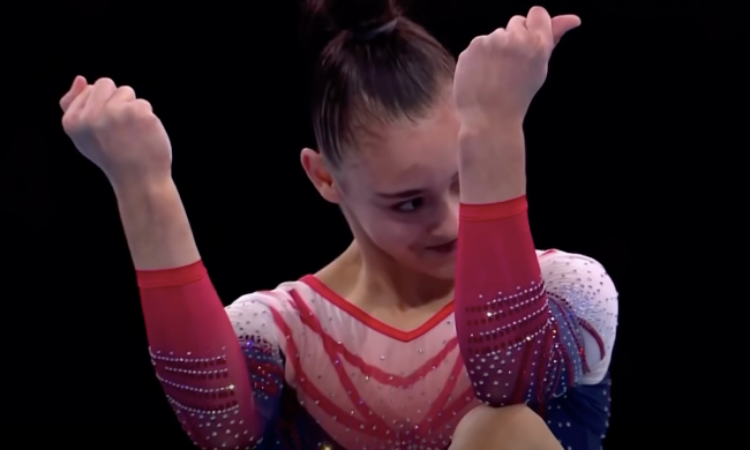 Morgan was originally committed to California but she has since unofficially decommitted and is still exploring her options. Whichever team she eventually joins, she will have an immediate impact on the lineups, especially bars and beam. After having a brilliant career as a junior, winning silver in the all around at both the Youth Olympics and the European championships in 2018, Morgan came back strong this year, winning bronze on bars and finishing fourth on beam and in the all around at Euros. She is a 4-star recruit in College Gym News’ recruit ratings system.

The Gadirova twins burst onto the international scene in the final year of their junior career in 2019 and have kept improving since. Jennifer made a name for herself at the junior world championships where she won silver on vault with a stuck Yurchenko 1.5 and finished fourth on floor. In her senior debut in 2020, she was fourth at the American Cup. She was recently named a 5-star recruit.

Jessica had a stellar 2021 European championships, where she won gold on floor, silver on vault and bronze in the all around. Were the sisters decide to choose the NCAA path, they could easily receive offers from the top colleges in the country. Jessica is a 4-star recruit.

The fourth member of the British team is veteran Kinsella, who competed at three world championships (2017, 2018 and 2019), as well as five continental championships, including in 2021. She is the 2018 Commonwealth Games and 2019 European champion on the balance beam.

READ THIS NEXT: Auburn Signee Sunisa Lee Wins Gold on Bars, All Around Silver at 2021 U.S. Nationals