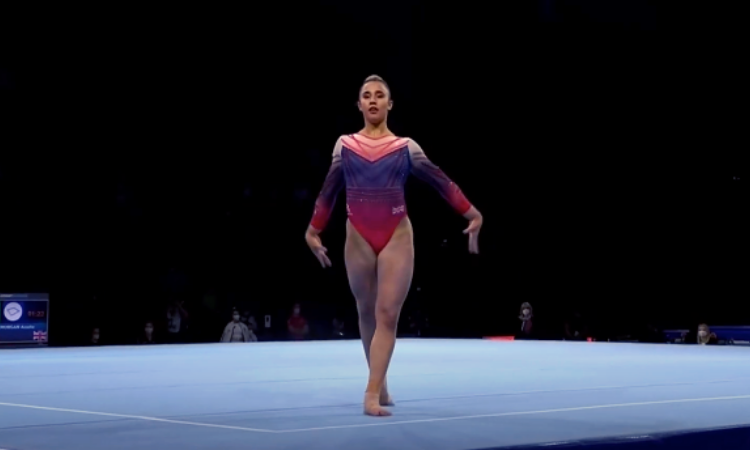 What a European championship it was for Great Britain’s Amelie Morgan! The four-star recruit in the class of 2021 earned a bronze medal on bars and finished fourth in both the all around and on beam, proving to be a contender for the British Olympic team.

On bars her routine included a piked Jaeger, a straddled Tkatchev to Pak salto, a Maloney to Bhardwaj and a toe-on front tuck half-out dismount. She scored a 14.100, edging Italy’s Giorgia Villa by one tenth for third place.

Morgan also competed solid beam routines all the way through the championships, including in the event final. Unfortunately, she lost her balance on her double wolf turn and grabbed the beam, which the judges likely counted as a fall.

Morgan was originally committed to California but is still exploring her collegiate options. Wherever she ends up going, she will have an immediate impact especially on bars and beam.

Penn State signee Elina Vihrova of Latvia qualified to the all around and beam finals, finishing 23rd and eighth, respectively. Beam is Vihrova’s pet event, and she normally performs her set confidently. Falls unfortunately prevented her from competing at her best.

Oregon State signee Phoebe Jakubczyk of Great Britain also competed in the all around in the qualification round, finishing 28th.

Russia’s Viktoriia Listunova, in her senior international debut, won the all around title ahead of teammate Angelina Melnikova, who suffered falls on bars and beam, and Great Britain’s Jessica Gadirova. Melnikova also won gold on bars and bronze on vault while the vault title went to Switzerland’s Giulia Steingruber and the beam title to France’s Mélanie de Jesus dos Santos.

Gadirova, also in her senior international debut, was the revelation of this championship, winning gold on floor, as well as silver on vault and bronze in the all around. If she is interested in a collegiate career, she and her twin sister Jennifer would be in the class of 2023.