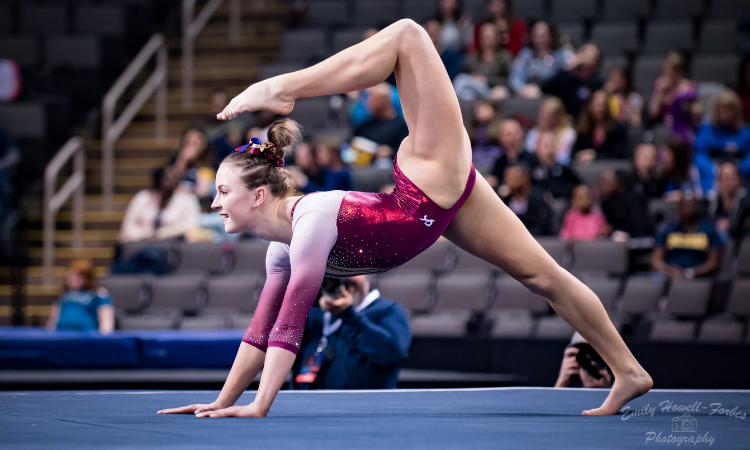 There are six finalists for this year’s AAI award, which is presented to the most outstanding collegiate senior female gymnast in the country. The award is one of the biggest honors bestowed upon a gymnast at the culmination of the season. NCAA head coaches are asked to submit a nomination for the candidates of their choice, and after the initial nominations (this year there were 29 athletes who were considered), the field is narrowed down to the top six.

Each of these gymnasts made considerable contributions to their respective programs over the course of their careers, resulting in a multitude of event titles, records, awards and team All-American nominations; not to mention all of the media and fan attention they helped usher into the sport. We want to take a moment to highlight the incredible careers each of the nominees have had and highlight some of our favorite routines. 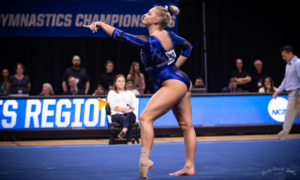 Alyssa Baumann will likely go down in history as one of the most beloved Gator gymnasts of all time. Her poise and skill is well known and much celebrated by gym fans across the country, many of whom began to follow her career as an elite—which included highlights such as being a member of the 2014 world championship team and a contender for the 2016 Olympics. This year Baumann added all arounder to her multitude of accomplishments, making her debut with an emotional return to bars after a five-year hiatus. She is most well-known on her best event—beam—where she won the 2018 title with the second-highest SEC balance beam score in the history of the SEC conference championship. In 2019, Baumann also became the first gymnast in 21 years to win consecutive beam titles, and in 2021 she became the first gymnast in the event’s entire 40 year history to win three beam titles. Most gym fans consider the fact that Baumann has yet to earn a perfect 10 on beam to be one of the biggest crimes in the history of scoring (and we must say, we agree). Baumann will compete with the Gators for the national title in Forth Worth beginning with semifinals on Friday, April 16 at 1 p.m. EST. 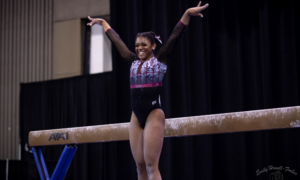 Lynnzee Brown’s skill, form and dynamic presence are impossible to ignore, and she will easily go down in Denver’s record book as one of the best gymnasts of all time.  While she is truly outstanding on the floor (see one of her perfect 10 routines here), she is best known for being a strong all arounder, where she currently holds the school record for top score overall and top road score. Most recently, she sealed her team’s first ever Big 12 championship win with another perfect 10 routine (this time on bars) and notched not one but two perfect 10s during the regional final—another one of each on bars and floor. Brown will rotate with Florida as she represents the Pioneers at nationals as a heavy favorite in the all around—where she is currently tied for second overall—on Friday, April 16 at 1 p.m. EST.

*If Brown were to win the AAI award, she would be the first Denver gymnast to do so. 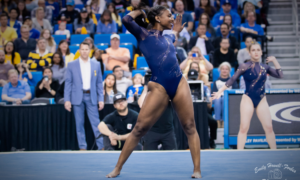 Where to even begin? Nia Dennis, a long-time favorite of elite gym fans, has cemented herself as a forever star of the UCLA Bruins. Dennis became the Bruin’s most viral star ever (not a small accomplishment) when she went viral for the second time in her career for her outstanding Black Excellence floor routine—featuring tracks from Kendrick Lamar, Missy Elliot (who called it “Snappin”), Beyonce, Megan Thee Stallion and Tupac—and was featured in publications all over the world. (Check out the write ups in LA Times, Slate, Vulture and BBC News, to name a few). Despite the fact that Dennis has struggled with injuries over the course of her career, she still managed to be one of the Bruins’ top performers year in and year out. She has absolutely stunning form and skill, and while she is best known for floor, she puts up gorgeous routines on vault (where she has scored a perfect 9.950), bars and beam as well. Dennis will rotate with Alabama as she represents UCLA at nationals on vault on Friday, April 16 at 6 p.m. EST. 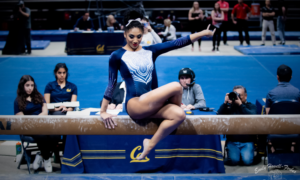 Kyana George is perhaps one of the most underrated gymnasts in the entire country—and certainly one of the most reliable and important performers for Cal—especially when considering she’s competed in the all around almost every meet since her freshman year. George has recorded multiple accolades for the Bears, including numerous gymnast of the week and first-team honors; she is also only the second Bear to ever be nominated for this award (joining former teammate Toni-Ann Williams). She is best known for being a dynamic performer on floor, but her presence in the all around has been key to the incredible success Cal has achieved over the past four years. George will compete with the Bears for the national title in Fort Worth beginning with semifinals on Friday, April 16 at 1 p.m. EST. 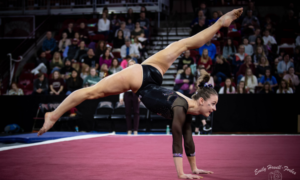 Lexy Ramler will not only go down in history as being one of Minnesota’s best gymnasts, she will also likely be forever remembered as one of the all-time fan favorites in the NCAA. She was the 2019 national runner-up in the all around, tying with UCLA’s Kyla Ross and falling just shy of defeating Oklahoma’s Maggie Nichols. Highly regarded for her impeccable form and grace on beam and bars especially, Ramler is one of the most well-rounded all around gymnasts in the entire country. While best known for her practically perfect beam routine every time out (fun fact: Ramler holds 17 out of 34—literally half—of the individual beam score records for Minnesota, she earned the very first perfect 10 at Maturi Pavilion, and she is the first Gopher gymnast to earn more than one 10 during a single season), she is also absolutely stunning on bars and demonstrates some of the highest difficulty being performed on vault and floor. This is an athlete that will be sorely missed by Gopher and gym fans alike. Ramler will compete with the Gophers for the national title in Fort Worth beginning with semifinals on Friday, April 16 at 1 p.m. EST. 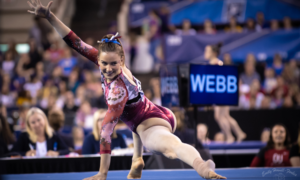 Anastasia Webb is one of Oklahoma’s all time greats (are you sensing a theme yet?) and will forever be known as one of the most dynamic performers to ever compete for the Sooners. Not only is Webb the only current Sooner to have competed in every single meet of her career, she has also been the team’s top contributor point-for-point since 2019 (during her freshman season, only Nichols outscored her). She is now only one perfect score away from the coveted gym grand slam (all she needs is floor) after notching her first 10 on bars this season (you can check out more of her perfection here and here). It’s not easy to stand out on a team that has such high name recognition as Oklahoma, but Webb has truly managed to separate herself and make herself known as one of the best Sooner gymnasts (nay, best NCAA gymnasts) of all time. Webb will compete with the Sooners for the national title in Fort Worth beginning with semifinals on Friday, April 16 at 6 p.m. EST.