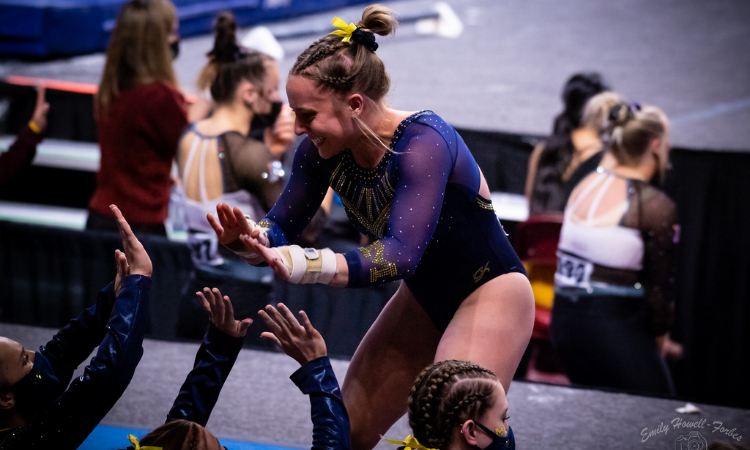 It’s been a rocky college gymnastics season, full of COVID-related cancelations and postponements, but we made it to postseason! To celebrate, we decided to run our postseason simulator again to see who the title favorites are and where to look for the most likely upsets along the way.

We collected all of the scores from the 2021 season and removed those from gymnasts who were known to have major injuries. We wrote a script that randomly selects scores from the remaining pool to simulate a meet, with gymnasts who competed more often during the season being more likely to make the lineup in the simulated meet. We also accounted for the fact that there are more judges in the postseason by adding or subtracting .0125 from some of the scores, determined randomly in each simulation. Finally, we expanded the script to simulate the entire bracket, starting with the play-in rounds and finishing with national finals. We ran this script 10,000 times.

The following table shows how often each team qualified to each round of the postseason across the 10,000 model runs in this simulation.

Let’s start with the Athens regional, labeled by many as the most stacked roster due to host Georgia being unseeded. N.C. State is a heavy favorite over Western Michigan in the first round, which is expected given the large ranking disparity between the two. In the second round, Georgia is given a fairly large chance at upsetting either Minnesota or Denver, while Oregon State would seemingly have to pull off the meet of its life to have a chance. In the regional final, Florida is a heavy favorite to advance to nationals, while the model gives a slight edge to Denver over Minnesota for the second spot.

In the Tuscaloosa regional, the surprise here is the fairly large chance (26%) given to 7th-seeded Missouri to pull off an upset over Auburn in the 2nd round. Missouri hasn’t generated a lot of buzz since the preseason injury to Helen Hu, but it has hit its stride in the last month and could put up a fight against Auburn, who had several low scores early in the season. Iowa is also given a significant chance (38%) at upsetting Arkansas (or even Alabama!) in the early semifinal; the Hawkeyes have been one of the most consistent teams in the nation this year, so they will have a great chance to take advantage of any weaknesses shown by the higher-ranked teams. In the regional final, it’s surprising to see Oklahoma only have an 86% chance to reach nationals compared to Florida’s 97%, but the Sooners have had some inconsistent meets that the model weighs equally with its more dominant performances. Alabama is a fairly large favorite over Arkansas for the second spot, but the Razorbacks’ chances should not be ignored.

The Salt Lake City regional is where we can most see the unfairness of the bracket distribution: The third-seeded Arizona State is only given a 47% chance at making it out of the second round, while fourth-seeded Kentucky is given an 80% chance. This is because ASU will have to fend off both Boise State and Southern Utah, two teams who have peaked at 196.900 and 197.275 respectively. The model is especially high on Boise State, who has been consistently scoring in the high 196 range, similar to Iowa. In the regional final, LSU and Utah are heavy favorites, with Kentucky more likely than Arizona State to pull off an upset, but those numbers are influenced by the previous round as well. If ASU can make it past Boise State and SUU, the Sun Devils’ chances in the regional final will certainly be higher than 4%.

The Morgantown regional shows the least potential for upsets of all, with the top four seeds all being given at least 90% chance to advance out of the second round. However, the play-in between Penn State and West Virginia is potentially the most exciting one, with each team around 50% likely to emerge as the victor. In the regional final, BYU’s and UCLA’s chances of qualifying to nationals are not insignificant, resulting in Michigan and Cal having lower chances than the favorites at the other regionals.

Once we get to nationals, Florida is the heaviest favorite to make it to the final, followed by LSU, Oklahoma, Michigan and Utah. Cal and Alabama’s chances are not insignificant, and the second qualifier out of the Athens regional (likely either Minnesota or Denver) will probably have around the same chance as well. Finally, the model picked Florida as the champion in the most number of runs (45%), which is a lower total than in the 2020 simulation, but it is enough to consider the Gators the favorites for the title. LSU is second at 19%, ahead of Oklahoma (13%) and Michigan (12%). It may be surprising to see Oklahoma’s chances so low compared to Florida given their tied NQS, but the Sooners’ inconsistency this season likely factored in, as well as their slightly lower chances to make it out of their regional.