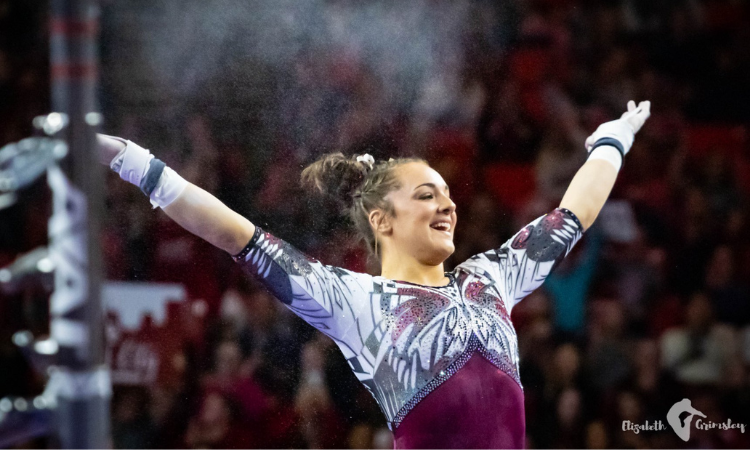 It’s been more than nine months since the 2020 season was cut short, but we’re not done talking about it just yet. There were so many highlights during the season—who can forget the perfect 10s from Mia Takekawa, Alexis Vasquez, Grace Glenn, Trinity Thomas and many others—that the postseason was sure to be an exciting one. We were all looking forward to the likely showdown between Oklahoma and Florida for the title, but many other teams were surging late in the season too, including California, Washington and Maryland. On the flip side, some teams were struggling due to injuries or a lack of rhythm; Denver, Nebraska and Boise State come to mind. While we can’t say for sure what would have happened during the postseason, we decided to try anyway by putting together a simulation that uses data from the regular season to predict what might have happened.

Using the top 36 teams from the final Road to Nationals rankings we created the following bracket for our postseason simulation. The bracket follows a snake distribution based on the rankings, with one small change so that each host team would compete at their home regional. While the NCAA claims to use geography and conference to determine the regionals distribution outside of the top 16 teams, the process is dubious and unpredictable, so we didn’t attempt to take it into account and only used the rankings.

We then collected all of the scores from the 2020 season and removed those from gymnasts who were known to have major injuries. We wrote a script that randomly selects scores from the remaining pool to simulate a meet, with gymnasts who competed more often during the season being more likely to make the lineup in the simulated meet. We also accounted for the fact that there are more judges in the postseason by adding or subtracting .0125 from some of the scores, determined randomly in each simulation. Finally, we expanded the script to simulate the entire postseason, starting with the play-in rounds and finishing with national finals. We ran this script 10,000 times.

The following table shows how often each team qualified to each round of the postseason across the 10,000 model runs in this simulation.

There are a few teams that stick out here: first, at the Denver regional, the only one that indicates that a non-top eight team would have been favored to qualify to nationals. Denver’s seventh-place ranking was largely earned prior to losing two of its best gymnasts—Lynnzee Brown and Mia Sundstrom—for the rest of the season due to injury. Losing those scores was very damaging to the Pioneers’ title aspirations in this simulation, allowing Minnesota or Oregon State to qualify to nationals in their place in 86% of the model runs. This goes to show how important seeding and regionals distributions are—if Minnesota and Oregon State had been placed in a different region, their likelihood of making nationals would be lower.

Another interesting result is that Utah had a slightly higher likelihood of winning the national title than UCLA despite a lower ranking. This is likely because of early-season inconsistency issues on UCLA’s part, particularly on beam. Those scores count the same as the higher late-season scores in this simulation, whereas the NQS-based team rankings allow for dropping lower scores. While UCLA had higher peak scores than Utah, there’s no way to determine whether or not that early-season inconsistency would have cropped back up during the postseason.

Finally, George Washington suffered two season-ending injuries to Hannah Munnelly and Chloe Vitoff that likely played a role in its poor showing in this simulation. In reality, another team such as North Carolina or Central Michigan probably would have qualified to the postseason in its place if the regular season had been allowed to continue.

READ THIS NEXT: Data Deep Dive: New NQS Rules Applied to the 2020 Season