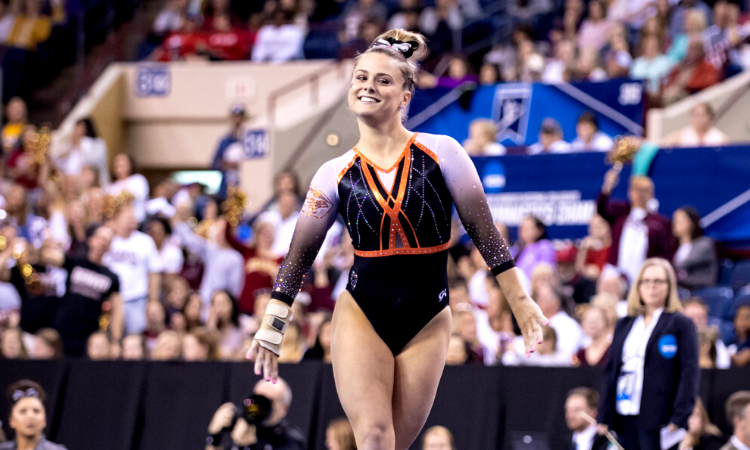 While the main focus of regionals is which teams will qualify to nationals, don’t forget that there will be individual qualifiers as well. Five gymnasts will advance from each region—one on each of the events and in the all around—based on their placements from the combined results from the round two sessions. These eight individuals have a realistic shot at making the trip to Fort Worth.

The sophomore qualified to regionals as an all arounder, and is ranked No. 6 on the country on beam, with both an NQS and a season high of 9.950. Qualifying is not without its difficulties, as she’ll be up against some of the best beamers in the country, but she’s by far the highest ranked individual regional qualifier without a team.

Hurst is currently tied for No. 21 in the country on beam, and is tied as the second best beamer at the Morgantown regional (behind only Natalie Wojcik). With a season high of 9.975 and several 9.9+ scores on beam, she is definitely someone you’ll want to keep an eye on. Plus she’ll have her team behind her, as Towson qualified to regionals for the first time in 21 years.

Big Ten Freshman of the Year Kenlin scored a 9.975 on beam at Nebraska. She’s ranked No. T-10 and boasts an NQS tied with the likes of Trinity Thomas and Alexis Vasquez. Assuming Alabama and Oklahoma advance out of the Tuscaloosa regional, Kenlin has a clear path to nationals. Arkansas’ Kennedy Hambrick would be her biggest threat in that scenario, although Hambrick may qualify in the all around spot.

Guerin has scored below 9.900 only once all year, in January. And that routine? A start value issue that has been fixed. She has four 9.950s on the year, including one at Big Tens that tied for the title. The Tuscaloosa regional will host two gymnasts with higher NQSs: Lexi Graber and Derrian Gobourne. Graber is likely to qualify with her team, so this spot is likely to come down to which of Guerin and Gobourne is more crisp on the day. Guerin’s teammate JerQuavia Henderson is also a threat. Henderson notched a 9.975 in February.

Miner Alder is in an interesting situation heading into regionals. Her team isn’t likely to make nationals, so her path to Fort Worth turns to the all around or floor as the most likely places for advancement. Assuming Michigan and California move on, Miner Alder would need to beat out UCLA all arounders Chae Campbell and Margzetta Frazier (and Nia Dennis?) in the all around or on floor. Add on the fact that she doesn’t even regularly compete bars makes it a pretty tall task. However, there’s a good chance the Cougars slide her in on bars—she isn’t bad on the event by any means—to increase her chance of advancing. If UCLA somehow advances as a team, the road is a little easier. Michigan’s weakest event is floor, and it’s not Cal’s standout either, but then there’s the Kent State floor stars, who regularly score 9.9-plus week in and week out, to contend with as well.

Out of all the individuals mentioned in this article, the Boise State senior is the most likely to make nationals. She is the top-ranked bar worker at the Salt Lake City regional period, sitting at No. 4 in the country. The next highest individual not on a team named Utah or LSU is Arizona State’s Cairo Leonard-Baker at No. 34. If everything goes to plan and she does her normal during round two, Muhlenhaupt is booking her ticket to Fort Worth.

The junior is ranked No. 12 in the country on vault and has an uncanny ability to stick it. Like Culton, Dagen is at the Athens regional of death and will be up against some strong vaulters for the spot, but if she sticks it the way she’s capable of, she could punch her ticket to Fort Worth.

The sophomore star is currently tied for No. 21 in the country on beam and is in a similar position as Hurst on beam—tied for second behind Wojcik at the Morgantown regional with a 9.950 season high. While beam is the most likely event for her to punch her ticket, she also has a shot in the all around. However, like Miner Alder, she will have to beat out some strong all arounders in order to qualify.

READ THIS NEXT: Data Deep Dive: Simulating the 2021 Postseason