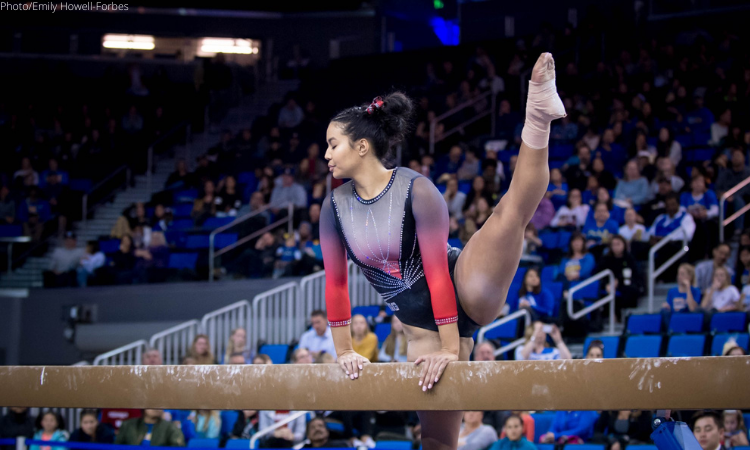 This is a fascinating matchup. Both Illinois and Nebraska are going to be relying on a very large number of new routines, either from freshmen or gymnasts new to a given lineup. Fully half of the Huskers’ 2020 roster is gone; this team will be relying heavily on Megan Verceles Carr and Makayla Curtis both to hit late lineup routines and to fill gaping leadership holes. It’s also critical that gymnasts like Clara Colombo and Kat Thaler add events they played with last year and are able to hit.

On the Illinois side, this big roster will continue to rely on Nicole Biondi’s leadership. Lineup stalwarts like Shaylah Scott and Kylie Noonan are also important, but beyond that trio the Illini are going to be relying on a combination of underclassmen and injury returners. We might see junior Mallory Mizuki make her bars and beam debut after suffering ACL tears each of the past two years. Mia Townes showed a new Yurchenko 1.5 in training, and the team is rumored to be working a few more 10.0 starts; don’t take your eyes off vault. Illinois hasn’t put up a 10.0 start since the rule change.

This matchup should provide a lot of insight into what we can expect from both of these teams in 2021, as well as how impactful both freshman classes will be.

Injury updates: Kasey Meeks is out for the season for Illinois with an Achilles injury.

Illinois is in a new leo tonght.

We’ve got a vault lineup and the stream is about to roll!

Yep that’s right! The Huskers are starting out 2021…five up. This is going to be a wild one, I think.

It’s two past and I just realized my stream had bonked out, but I’m in now. I didn’t miss anything though! Here’s Illinois’ lineup.

The #Illini are starting the season off on bars! pic.twitter.com/KGi4uZVR6P

No Mikuzki on bars for Illinois is a bummer. Maybe she’ll break into beam.

Dujakovich just warmed up a Yfull, so I’m not sure we’ll see her 1.5 today.

Borden (Ill): Blind to 3/2 dismount, they skipped the beginning for a vault replay, in classic form. Based on cheers it was a hit. 9.825

Davis (UNL): The freshman is being left waiting for quite awhile. Unclear what the holdup is since Curtis’ score is in. Yfull, big! but some leg form in the air. 9.775

Ewald (Ill): Back-to-back freshmen! Blind, Jaeger, caught close, to pak, overcooks it and catches with her shoulders too closed, falls. Remounts, coach Buckner signals her to stop and they’re adjusting the bars. Something is off. Coach Walsh is talking Ewald through it. Tough first collegiate set! Looks like she’s done.

Simons (Ill): DLO, several steps back, once again we didn’t get to see most of the routine. I’d like a word with these camera folks. 9.6

My stream kicked me out during a second Illinois exhibition that I think was Abby Mueller.

That’s not the start either team wanted. Scoring was tight, a touch more on bars than vault, but not ridiculously so. Steps, handstands, hip and shoulder angles, all those little details added up.

Thaler (UNL): Arched first handstand. Toe hand to Maloney, missed her hands. We missed some after she remounted. Blind 1/1 to double tuck deep squad and a big step back. 8.75

Roby (UNL): Hect mount. Blind to Jaeger, some legs on the blind. Pak, good catch. DLO, tries to hold the stick, tiny hop in place. One of the cleanest sets yet. 9.8

Piringer (UNL): Toe hand, Maloney, bail hand, little short, feet form. She got a touch wild there. Blind 1/1 major leg sep to double tuck to small hop. 9.775 oh hmm. Given other scores I didn’t see that coming. She really got ahead of herself for a second.

Phew we’ve got a close one! Scores have remained tight. I don’t feel furious, but I always think NCAA scoring is too high. Take that as you will. Ewald should be very proud of herself for recovering so well from that first bars fluke situation. That’s good for the staff to know about her, too.

Overall, both teams just look sloppy, which is not unexpected given *gestures around at world*. We’ll see how these next two go, but I at this point I think both squads are looking at this as a real tune up meet.

Townes (Ill): Immediately obvious she’s got the best performance quality so far. FHS 2/1, bounds forward a touch into the lunge. She’s really selling this and the choreo works  for her. RO 3/2 + front 1/1 lovely form, some sloppy feet in the lunge. Huge Tour jete 1/1 + straddle 1/1. That’s a fun routine. 9.75

Thaler (UNL): Front aerial bhs bhs, some knees in the aerial but no movement on the landing. Switch + beat, I just want her knees tighter throughout. Front toss small check. Little check on her full turn, too. Just nervy. RO 3/2, small hop. A hit! We’ll take it! 9.75

Noonan (Ill): She’s a great performer, too., FHS 2/1, THERE WE GO that’s the landing they’ve been looking for on that pass. FHS front lay to rudi, another good landing, could use more amplitude on the rudi. Ring, low front leg to cat leap 3/2, love the retro skill. RO 3/2, front lay, another great landing. Cleanest feet yet. 9.825

Roby (UNL): Press mount, pretty as always. Front aerial, no movement whatsoever. Bhs loso, again, stuck cold. She is ON. Straddle + double stag, I could use a bit more head release but it was nice. Side aerial 1/1 stuck. THAT is the set the Huskers needed! 9.875

Scott (Ill): FHS 2/1, great landing. Solid on her leap series. RO 3/2 to front lay, had to muscle the lay but made it over and landed well, just deduction there for archiness. FHS rudi another great landing. Clean overall. 9.875, yep.

Phewwww things got dicey there on beam for Nebraska. Roby was excellent, though, and Heather Brink will be glad to know she can shine in pressure spots this year after a rocky comeback year in 2020. Illinois has some messy moments to work on, mostly feet sliding around in landings and precision in jumps and footwork. Overall, though, that’s a promising rotation for the Illini.

The last touch took forever and a half to start, so we have time to ponder the absence of Megan Verceles Carr. I’ve got nothing for you on that. Haven’t even seen her lurking in the background.

Townes (Ill): She didn’t know which side to salute. It was a funny moment, turning between both judges’ tables. Alright here we go. Switch + straddle 1/4, lands on her heels but holds steady. Front toss, little check. Solid bhs loso. She looks very comfortable, which is always refreshing. Cat + side aerial + tuck 1/1, stuck, feet a bit apart. 9.825

Borden (Ill): Front aerial + FHS + straddle, nice, some knees in the aerial. Backwalkover to her knee, need that backward element. Small check on her jumps. Front 1/1 holds the stick. 9.775

Lorange (UNL): Her music is My Favorite Things which is perfect for her. Double pike, flexed feet and step OOB on the lunge. Messy on her combo pass landing. She’s a performer, great dance. Ring to straddle 1/2 was solid. RO 3/2 + front lay, better landing, some loose legs. 9.375, all those landing errors.

Knight (Ill): Back dive mount. Switch + split, little shy on the latter. Side aerial bhs, way off line going into the bhs and she falls. Looks a little tentative in the full turn. Side some + back 1/1 off the side, dropped chest but holds her feet. 9.075

While we wait here, I’d like to say that Sarah Hargrove is also nowhere to be seen.

Roby (UNL): Phew long wait. Here we go. Full-in, some leg sep but solid landing. Good to see her doing that pass again, after all her knee issues. Double tuck, little crunchy on the landing. Really cheated her way around on a wolf 3/2, I don’t see it getting credited as more than a 1/1. 9.125, yep missing D or a value part, I’d say, due to those jumps.

Noonan (Ill): Bhs loso, solid. She has a very calm beam presence. Switch + loso is good, she had a low shoulder but covered so well. Beat + double stag, little imprecise in the stag position. Cartwheel gainer 1/1 off the side stuck. Great recovery set to get back on track.   9.6, hmm, not sure about that.

Higgins (UNL): Another big wait here. FHS 2/1, loose knees, lost herself a little in the air and sort of fell out of the rotation, but stayed on her feet and got all the way around. Fine on her leaps. Double pike, landed super low and falls. She just wasn’t ready for the floor. RO 3/2 + front lay, great body position and stuck. 9.125

Scott (Ill): Front toss BHs, little wobbly. The whole beam slid, I do not know how she stayed on honestly. Switch + double stag, could see the positions from the camera angle. Cartwheel Gainer 1/1 off the side, holds the stick. 9.775

Piringer (UNL): DLO, little slow getting it around but makes it, small foot adjustment. RO 3/2 + front lay, stuck. Switch side + popa, little imprecise in the switch. Double pike, slides her front foot on the lunge. 9.775

Takekawa (Ill): Side aerial bhs, some looseness in the knees but no movement on landing. Switch + side aerial, big bend at the hips. Maybe a .2 error. Bhs Gainer 1/1 off the side stuck. Good recovery. 9.8, just that one big check.

Press (UNL): DLO, big lunge and moves her front foot. She has a very pretty presence. Did get her popa fully around, but it was close. RO 3/2 front lay, sort of wild in the air but keeps the landing together. Front lay + front full, stuck. That’s a pretty set. 9.725

Mizuki (Ill, exh): YES HERE WE GO amazing to see her out here. Bhs loso, tiniest check. Switch + straddle 3/4, drops her chest but holds it. Cat _+ side aerial, another check. She’s clearly nervy. Gainer pike of the end stuck. Huge grin as she salutes. That’s a storyline we can all get behind.

Well that’ll do it. Nebraska had a pretty big meltdown. Missing Verceles Carr and Hargrove is a puzzling issue. If/when they’re back, they’ll both help right the ship. Illinois will be pretty pleased. It learned a lot about who can hit under pressure. That’s by no means a bad first meet score for the Illini, and there’s lots of room to go with cleaner routines, on floor espeically. Ewald really had a breakout moment