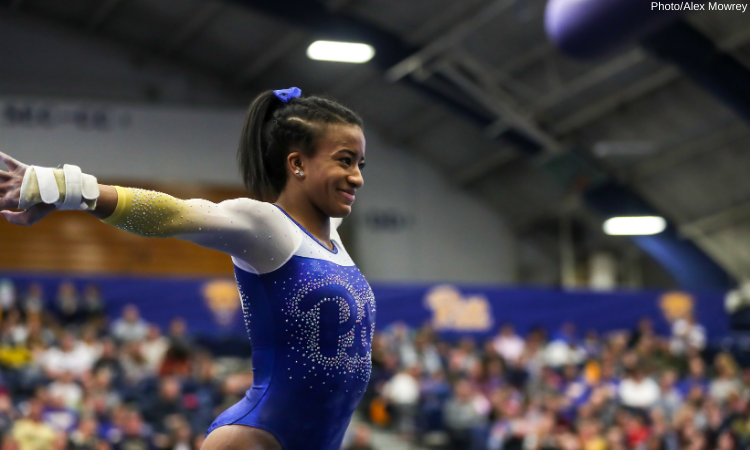 It’s time for the first EAGL matchup of 2021! With the abrupt end to the 2020 season, many teams have unfinished business going into 2021. Both Pittsburgh and N.C. State were on an upward trajectory at the end of season and will be looking to start where they left off in 2020. This is also an exciting matchup because these teams were ranked as the top two in the conference, according to the 2021 EAGL preseason poll. It should be an exciting meet!

N.C. State lost a couple of key gymnasts after the 2020 season, but it brings in a stellar freshman class along with the return of Nicole Webb, who missed most of 2020 with an injury. From the freshmen, keep an eye on both Carina Jordan and Gabrielle Diaz, who are expected to be top contributors for the Wolfpack. Also watch for a pair of sophomores—Chloe Negrete and Emily Shepard—who had stellar first years and will be looking to continue that success in 2021.

Pitt is losing half of its 2020 routines going into 2021, so the team should look quite different than it did last year. Katrina Coca and Katie Chamberlain, who both missed 2020 with injuries, should hopefully be key returners in 2021. Freshman Trinity Macy had a successful level 10 career and is expected to have a major impact on the team in her first year.

Benson (NCSU): short on tucked omelianchik with a step back – 9.525

Beckwith (Pitt) – falls on gienger, leg sep on pak – had a little trouble on pirouette – good double tuck dismount with a step forward – 8.55

Lerro (Pitt) – good maloner, little short of hs on bail, looks like she hurt her shoulder on her double front dismount and landed on her back. That did not look good – 8.725

Rough injury for Pitt in that last spot on bars. I hope that wasn’t as bad as it looked. Other than the two falls, not a bad bars rotation from Pitt. N.C. State still struggling with landings and difficulty on vault but a good start.

Good rotation for both teams. Vault scoring seems a little bit tight. 49+ on bars in the first meet for N.C. State is a HUGE number.

Nelson (NCSU): front aerial to back layout, short of 180 on leaps, good side somi, slight step on side aerial to full twist dismount – 9.8

Macy (Pitt); great rudi to start, beautiful leap combo, fall on 1.5 to front lay – too bad because that was a beautiful routine until then – 8.675

Ceccarini (Pitt): beautiful first pass – it’s so long that I have trouble IDing what it is, hands down on double tuck, great up until then – 9.125

Beckwith (Pitt): good double back to open, great 1.5 to front lay, great routine! She didn’t compete floor last year so glad to see her in the lineup! – 9.775

Miller (Pitt): good double back to open, beautiful leap series, great front lay to front full, too much power on double pike and takes a couple shuffle steps back – 9.775

Good beam rotation from NC State. Excited to finally see Shepard in the lineup! Too bad about Pitt having to count a fall on floor but nothing that they won’t be able to fix for the next meet. I see Winder on the sidelines with an ice pack on her knee but no crutches, which is a promising sign. Lerro’s arm is in a sling.

Cox (NCSU): good rudi to open, great 1.5 to front layout, last pass looked the same as the second, so not sure if I missed something, but it was a solid finish – 9.775

Negrete (NCSU): great double pike to open, good leaps, and nearly stuck her double back to close (I accidentally looked away on her second pass)  – 9.8

Webb (NCSU): exh – beautiful dance to open, rudi to stag jump – good, off on 1.5 to front tuck – almost fell but saved it with a deep squat

Pitt really redeemed itself on that beam rotation. Definitely the best event of the night. It’s still only the first meet, so there’s plenty of time to work out the kinks. N.C. State had a solid start to the season. A few little things here and there to clean up, but it should be another good season for the Wolfpack. 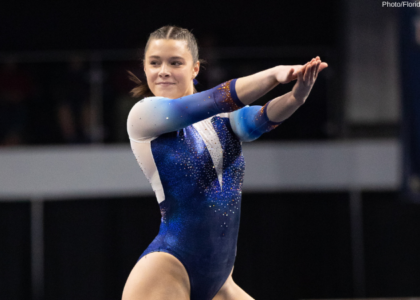