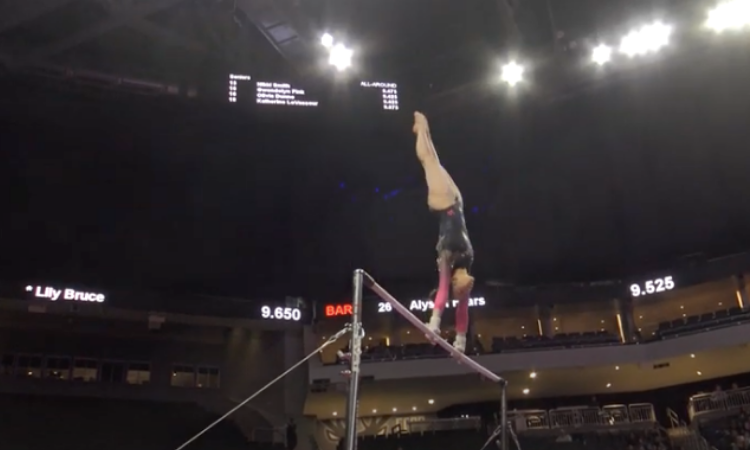 The most anticipated series is back! We looked at the data for each incoming J.O. freshman on each event to see which gymnasts are at the top of their class across the apparatuses and in the all around. This week we’re looking at the top 10 bar routines for 2021.

A former elite gymnast, Perea performs a difficult bars set: full pirouette to Maloney to Pak salto and a double layout dismount. Head coach Justin Howell may decide to leave out her full pirouette to avoid unnecessary deductions and instead focus on Perea’s form on the other skills. Her lines are very good, but she has little leg separations on her Maloney and Pak. Bars was California’s best apparatus last season, and given that none of its seven top bars workers has graduated, it will be difficult to crack into the lineup. Perea will be a top contender, though.

Smith is stepping into big shoes at Oklahoma, having to replace Maggie Nichols and Jade Degouveia. She brings a good set to Norman, though K.J. Kindler will want to work on her form: She loses her toe point on her Tkatchev and pikes down her double layout dismount a bit.

Sabado’s lines on bars are similar to those of the gymnasts she will be asked to replace at Utah: Missy Reinstadtler, Kim Tessen and Hunter Dula. Her Jaeger, bail to handstand and double layout composition will score well in the NCAA, despite a slight leg separation on the bail.

Bryant swings bars well. Her routine (Maloney to bail handstand) is similar to many around the country, but she caps it off with a strong double front dismount. LSU will need her contribution here after graduating Kennedi Edney and Ruby Harrold, two of its best bar workers.

Bars was Georgia’s Achilles’ heel last year, so the Gymdogs will be delighted to welcome a strong bar worker. Finnegan’s routine is not deduction-free—she separates her legs on both her major skills (Pak salto and Van Leeuwen)—yet it remains a strong set, with an excellent full-in dismount as the icing on the cake. Georgia will need her.

Killough-Wilhelm performs her skills with excellent height, especially her piked Jaeger and full-twisting double back dismount. At the 2020 Nastia Liukin Cup earlier this year, she connected an inverted full pirouette to her Jaeger, which was original and impressive. Washington, however, may decide to leave that skill out of her routine, as it incurs several deductions. The Huskies were outstanding on bars last season, but with three of their best bar workers (Madison Copiak, Evanni Roberson and Maya Washington) graduating, they will be relieved to have such a talented freshman joining the roster.

With Maddie Karr’s graduation, Denver will be delighted to have a new good bar worker to add to its roster. Casali’s routine (Maloney to bail handstand, double Arabian dismount) is not as dynamic as Karr’s, but it doesn’t present major deductions either and will score well.

Bauman has the potential to get multiple perfect 10.0s on bars because her lines and toe point are spectacular. Her Maloney to bail handstand is as flawless as Kyla Ross’ and the toe point on her double front dismount is always impressive. It is a difficult dismount to stick, though; the main deduction on her routine will probably derive from it.

Lyle has clean lines on bars and a gorgeous Maloney. The major deduction will come on her double layout dismount, which is a bit messy in the air and piked down in the second somersault. Still, she represents a welcome addition to UC Davis’ growing program.

Li has beautiful lines and a difficult routine, which includes a Jaeger and a Van Leeuwen. If she has a weakness, it is her dismount, which she has changed several times in her level 10 career and never gotten incredibly consistent. As said with Perea, it will be difficult to make the bar lineup at Cal next year, though Li is likely to be a favorite.

READ THIS NEXT: Most Anticipated J.O. Freshmen on Vault