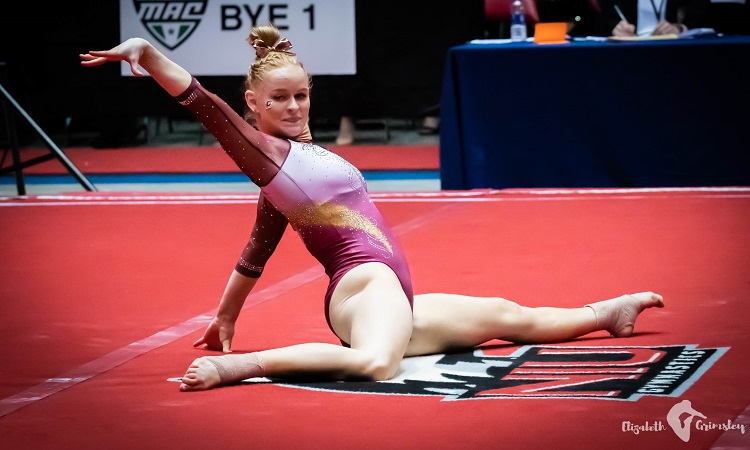 With a 195.575 tallied after six rotations, the Central Michigan Chippewas headed to a bye corral in Northern Illinois’ Convocation Center on Saturday afternoon to watch the last rotation of the MAC championship. They had outpaced Eastern Michigan, with whom they had been tied going into each teams’ final competitive rotation, and were sitting in first with only the host Huskies likely to catch them.

As it became clear that Northern Illinois was going to take the title after a program record-setting beam rotation, the Chippewas stood quietly in the corral.

Central Michigan came into the meet as the defending champion, regular season champion and the only team in the conference with two 196-plus totals all year. Among the elation in the room for the host’s first-ever title, the Chippewas’ disappointment was evident. That didn’t stop them, though, from congratulating the champions along with the rest of the field in a strong show of sportsmanship that was led by Kent State.

Despite the second place finish, the Chippewas were ever-present during the award ceremony. They received their regular season trophy, junior Denelle Pedrick was named MAC Gymnast of the Year and freshman Morgan Tong took freshman of the year accolades. The team also claimed three event titles.

“We stayed together really well as a team, we’re really there for each other.” Pedrick said of the team’s success, despite the distractions surrounding the squad. “We do it for each other, so that kind of gives you that extra motivation.”

Central Michigan’s head coach, Jerry Reighard, was put on administrative leave in late February, just as season was ramping up. Central Michigan Life reported on Wednesday that his leave was prompted by asking gymnasts to lie to athletics staff about their injury status.

In Reighard’s absence, associate head coach Christine MacDonald has taken the reigns. The team put up its best numbers of the season under her leadership.

“Having a set game plan going into the week is really what makes it successful for us,” she said of preparing for the competitive MAC field. MacDonald noted that the three-bye setup makes MACs unique, but the team spends time talking and preparing for all of the start-and-stop that comes with the format.

A significant part of the team’s continued success this year can be attributed to Pedrick. The junior has become a premier all arounder in the conference and is nationally competitive with her double twisting Yurchenko and strong triple twist on floor. Plus, she’s a leader in the gym too.

“She really does put the true value and meaning in student-athlete,” MacDonald said.

Pedrick trains year round, and the Canadian competes in her country’s national championships during the offseason. She is the reigning Canadian Junior Olympic all around champion in her age division. “She is fully committed at every level,” MacDonald said.

Pedrick credits maturing emotionally with her ability to step in as a leader this year. “I’ve learned to take the freshmen under my wing, the underclassmen, and try to be the best example for them, as well as make sure they are as confident and prepared going in as they can be.”

Tong appreciates the work Pedrick and her fellow upperclassmen did to help the newcomers adjust to collegiate gymnastics. “The upperclassmen really taught me how to compete well and trust in myself,” she said.

The freshman has been a three-event gymnast all season, with only three scores below 9.500 all year. She said preseason helped her to become more confident and stop doubting herself, which allowed her to start the season off strong, and credits the coaching staff for their work.

Despite not coming away with the conference title this year, the Chippewas put up an impressive showing amidst the controversy of losing their head coach. The best news for this team is that Pedrick and Tong are back next year. It is losing seven routines from its conference lineups, including Gianna Plaksa’s critical three, but if Pedrick’s leadership this year and Tong’s breakout performances are any indication, the Chippewas will be ready to take on 2020.

Before that though, they have unfinished business.

Central Michigan will head to Ann Arbor for the first round of regionals, where it will compete against Illinois for a spot in the second round. If the team fails to advance, Pedrick will compete as an individual all arounder and Plaksa will perform on bars.