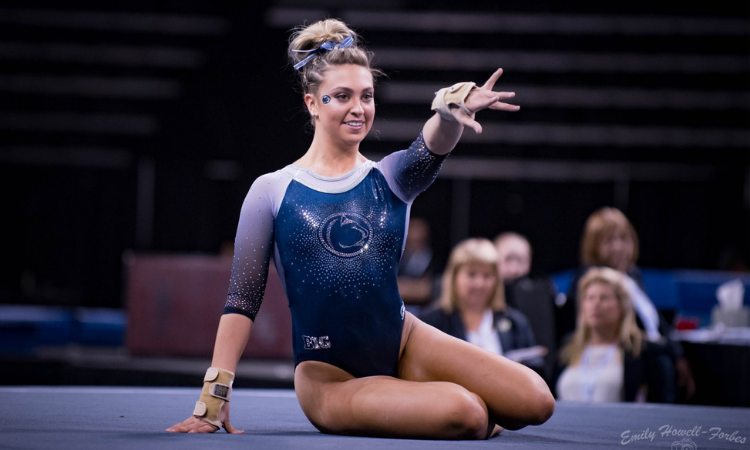 In head coach Sarah Brown’s second season, Penn State has been steadily improving. The Nittany Lions finished 2018 ranked No. 32, and this year they sit in 23rd heading into regionals. At the Big Ten championship, they participated in the evening session and finished fifth, two spots higher than last year. As to why these improvements have happened, Brown credits having a better knowledge of each individual athlete.

“This year I just got a better sense of what the athletes were like on a personal level, so I feel like I tried to mold our workouts and our game plan towards their strengths and help them to really find joy competing in such a rigorous sport,” she said. “Last year we definitely had a lot of work ahead of us, but I didn’t know the team as well as I know them this year. And this year I feel so much more connected with them.”

Another reason for improvement has been an attention to detail.

Several newcomers on the team have stepped up to contribute in a big way. Freshman Melissa Astarita has been in the vault and floor lineups every meet of the season while transfers Jessie Bastardi and Erynne Allen have played important roles in the beam and bars lineups, respectively. Allen has also contributed on floor a couple time.

“I feel like they’re still kind of our youngsters even though they’re older in class,” Brown said about the transfers. “It’s just been great to have them primed in such a big event like [the conference championship] because I know they’re going to be even stronger next year.”

Although the future is bright, the large senior class will definitely be missed next year.

“We’re going to miss that senior class for sure,” Brown said. “They fought through some tough years, and I’m hopeful that at the end of it all, they’re going to be grateful for their experience here and they’re going to have enjoyed these last two years with me.”

Heading into regionals, Brown wants the team to continue to perfect the little details.

“We hit 24 for 24 tonight. That’s definitely something we want to build upon,” Brown said about the team’s performance at Big Tens. “We know we didn’t stick a lot of vaults, and we still left some tenths here and there that we know we can get stronger with.”

The Nittany Lions will participate in the first session of round two at the Ann Arbor regional on Friday, April 5 at 2 p.m. ET.