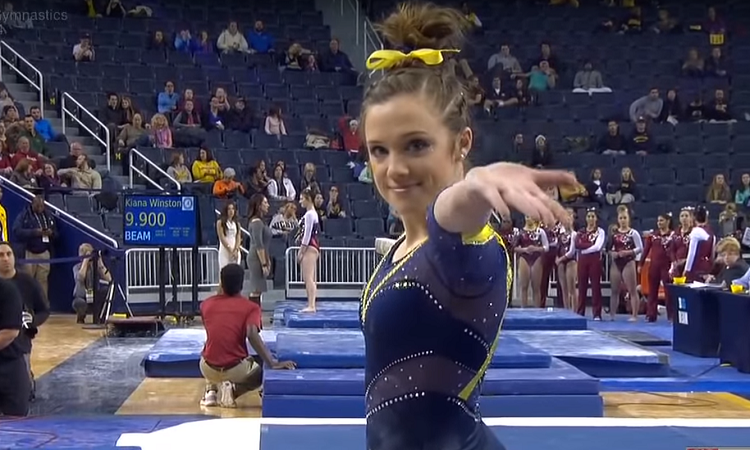 Aaaaaand we’re back for the evening session! If you missed anything from the afternoon, catch up before we get underway here with the Session I live blog. Nebraska had a strong meet in the afternoon, scoring a 196.95. It is a solid score that will put pressure on Michigan to hit, and is higher than any of the other teams’ season highs.

Michigan is the clear favorite here. The Wolverines have won the last four Big Ten titles and are hunting for their 24th conference championship tonight. Last weekend, Michigan was the only Big Ten team—perhaps with the exception of Illinois—that looked postseason ready. The Wolverines are coming off two stellar weeks, upsetting Utah at home and hitting 24 for 24 at Big Fives. There are two things keeping Michigan from looking Super Six quality: vault landings and difficulty. Look for the team to focus on clean vaults and perhaps to add some difficulty to the vault and floor lineups. The Wolverines are capable of more 10.000 vaults and E floor passes than they have shown so far this year. They could throw them here for practice on podium before postseason, or save the upgrades and potential for injury and falls for regionals and nationals since they don’t need the added difficulty to win. It will be interesting to see what head coach Bev Plocki chooses to do.

Behind Michigan, the field is tightly packed. Minnesota, Ohio State and Illinois can all put up high 196 scores and fight for third; catching Nebraska will be tough for any of those teams to catch. Of this group, Illinois looked most prepared at Big Fives. The Illini need a clean vault rotation to hit a big number. If vault goes well, the Illini could be dangerous. Illinois is rotating in the same order here as it did at Big Fives, starting on floor and ending on a bye, so maybe the magic from last weekend will carry over. Minnesota landed the preferred rotation draw, starting on vault. The Gophers had some struggles last weekend on beam, where they counted two falls, but otherwise had a strong meet. They could very well contend for a high finish on the strengths of their excellent bar and floor rotations if beam goes smoothly. Ohio State’s woes at Big Fives also came on beam in an otherwise strong showing. With a hit on that event, the Buckeyes are a dangerous team. Their strengths are also bars and floor, but vault is becoming a strong event as well.

Maryland and Iowa find themselves in session two after upsetting teams that struggled in Big Fives. The Terps and Hawkeyes had consistent showings last weekend, keeping their cool while other teams crumbled. If any of the teams here have a meltdown (have I mentioned beam enough? Watch out for beam!) either of these teams could finish higher than their rankings suggest. This is an especially excellent feat for Maryland. The Terps joined the Big Ten for the 2015 season and have never been in the championship night session. They finished last in 2016 and 2017.

The Big Ten inexplicably puts four teams in the early session and six in the late session (to mirror Super Six? Who knows), so we’ll have two byes per rotation here. Bye 1 is after vault and Bye 2 is after beam.

March in is about to start! We have a bigger crowd here for the night session. We’re hearing a lot of chanting for Illinois, Michigan and Iowa so far.

Up close and personal with newest Maryland bling✨ pic.twitter.com/GtMLCdt24D

I can hear the teams chanting and singing fight songs from my seat, and the Michigan contingent just stood and chanted when Wolverine coach Bev Plocki walked into the arena. Great environment here!

This time Iowa fans are right behind me. They are HYPE.

Kristen Quaglia (Minn.): FTY nice, just a hop back and some low chest.

Lexy Ramler (Minn.): FTY, great height, might give her a stick.

Abby DeMuse (Minn.): FTY pretty, just a tiny hop up and some chest down.

Paige Williams (Minn.): Good to see her back. FYT, HUGE, hop back.

Rae Balthazor (Ill.): Huge double tuck. Tour jete full, I think she got it around but have a bad angle. Strong last pass, ending on a front lay.

The Iowa routine I initially id’d as Zurawski was Nikki Youd – sorry Nikki!

Well, session two scoring is IN EFFECT. Scores are not crazy, but definitely not as tight as this morning. Illinois looked strong on floor, and will be happy with that first rotation. Maryland is a great bars team: strong handstands and landings throughout the rotation. Minnesota had movement on most vault landings, which is what kept the Gophers down, but they shouldn’t be upset at that score on what is usually their weak event. Iowa was steady on beam. Keeping wobbles out is what pushed the Hawkeyes over the 49 mark.

Syd Townsend (UM): She did the double front! Stuck it.

Merkle? (tOSU): Again, sorry on these IDs friends! Lacking a start list for a chaotic meet is pretty brutal. Full in, good in the air, but low chest on landing. 2/1 loso, pretty! Double tuck, great landing, controlled lunge. CORRECTION: This was Janelle McClelland.

Illinois survived its weakest event, and maintains the lead over Maryland. The Terps struggled on beam, with wobbles and falls. Michigan had a great first event, tying its season high on bars. Ohio State has a very engaging floor rotation, and should be happy with that first event.

Merkle (tOSU): FTY solid, some pike but not huge.

McClelland (tOSU): Yhalf, just a step to the side.

Zurawski (Iowa): This is such a dramatic routine. Strong first landing. Front full front lay nice. The Iowa fans are LOUD LOUD. It is intense in here. Rudi, little wild, lunges sideways, but she sells it.

Phew! Iowa was excellent on floor (and when the Hawkeyes weren’t they SOLD IT). Ohio State’s vaults are very strong, and are keeping the Buckeyes in the hunt for second. Michigan continues to have a strong meet; the Wolverines look prepared. Minnesota has a strong bar rotation, but the Gophers are still paying catchup from vault.

Scores are definitely inflated from the first session at this point, though these six teams are prepared to compete on this big stage and looking solid across the board.

Someone literally just spit on me from the crowd due to loud screaming. Guys.

Chow (Iowa): FTY some pike but another stick. Iowa is HERE.

Every team here is having a solid meet. There hasn’t been a disastrous rotation for anyone yet, which seems miraculous after the messes we saw at Big Fives last weekend. There’s a dance cam on the big screen in the arena and…it is not going well.

Hodan (Ill.): Lovely lines. She has the stage all to herself. Side aerial bhs, solid. Switch + sissone. Cat + Illusion, secure. Nice! Cartwheel + stuck gainer full. Redemption for her fall last week on this event.

Illinois and Maryland’s nights are done, and neither passes Nebraska’s score from earlier. Michigan is on pace to top Nebraska if the Wolverines put up a normal vault rotation. Ohio State and Iowa are still very much in the hunt for third.

Olivia Karas just boot-ran by the media table. That Achilles isn’t slowing her down much. She’s also wearing a leo. Good to see her out here in good spirits!

Zaziski (UM): FTY hop back, some knees on table. Sells it, though.

Michigan has all but won it, and they know it.

Mattern (tOSU): Long wait. Stage all to herself. Front toss, big wobble. Front toss bhs, repeated for the connection. Gainer full off the side, hop straight up.

Williams (Minn): Gets to close out the meet all on her own. FHS 2/1, nice! Good landing. Switch side + popa, got the rotation. 1.5 front lay, floats it. Really nice. FHS rudi to close, dropped it right in. What a way to close the meet!

Michigan has done it again! And Nebraska hung on for second from the morning session.