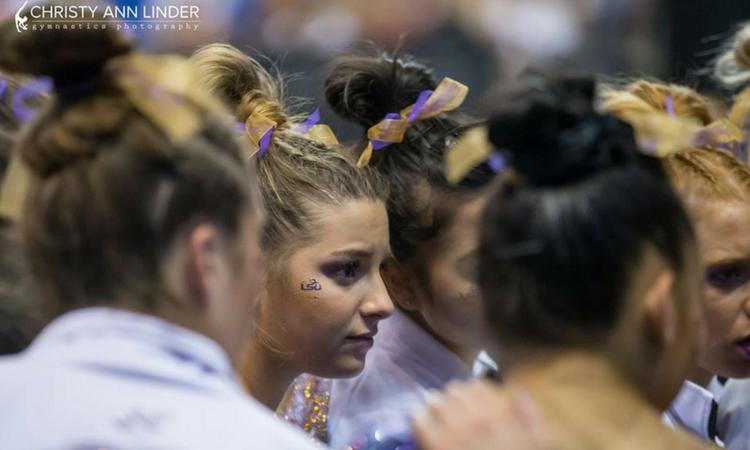 The most anticipated SEC matchup of Week 5 sees Kentucky at its best facing LSU after a disappointing second-place finish (read: loss) to UCLA at Metroplex. LSU cannot afford to show weakness to this up-and-coming Kentucky team if it intends to keep pushing toward nationals. So even though the Tigers are expected to win, especially since they’re at home, expect them to keep going full throttle as much as they can, without going overboard and risking injury. The major players should still be in all four lineups: Myia Hambrick, Sarah Finnegan and Kennedi Edney – all their scores are necessary for LSU to show the dominance it’s required to show.

Meanwhile, Kentucky will be looking to capitalize on LSU’s more forgiving scoring to earn a high road score, which will be useful as we quickly approach RQS time. The lack of Sidney Dukes and Alex Hyland on bars is still slightly concerning, but their team-best performances on beam and floor are buoying those event totals. Mollie Korth is also performing spectacularly as the team’s lone all arounder, so expect her to give the Tiger AAers a run for their money. Tonight will be one for the books, so get ready! We’ll be covering all the action starting at 8:30 P.M.

Finnegan, VT: Big floaty FTY, little bounce back. Is she training the Y1.5? I think so.

8:36pm: Carlisle, UB: Jaeger to open, a little knees but good. Bail a little shy of handstand, as is her final handstand. Full in dismount, little hop forward.

8:38pm: Warren, UB: aggressive swing but can’t get up to vertical on her handstand. Great amplitude on the Jaeger, bail is solid. Last handstand is short. DLO slung out far, step back.

8:39pm: Edwards, VT: she is such a cutie, love her. Y1.5, little cross step back to steady herself, but definitely a good one.

8:41pm: Priessman, VT: FTY, little hop back, great form. Hearing from commentators that we might see Y1.5 from her in postseason!

8:42pm: Coca, UB: Jaeger, good. Handstands looking overall cleaner on this one. Full in, looked like a stick?

8:43pm: Hambrick, VT: Commentators calling her the unsung hero? She’s the senior leader, y’all. Y1.5, one of her good ones! Overcooks just a little and steps forward out of it.

8:44pm: Hyland, UB: good to see her back in this lineup! Finally! Giant full to gienger, decently clean. Bail straight up and down, lovely. Full in, hop back. Solid.

8:45pm: Edney, VT: Love seeing her anchor this lineup as a sophomore. Big Y1.5, big step forward. She could totally train a double with all that power.

After one rotation, LSU leads 49.225 to Kentucky’s 49.050. Both teams had trouble finding their landings, with maybe one stick out of all twelve routines. With a fall, Korth is likely out of the running for the AA title, barring disaster from the LSU trio. Hambrick leads the vault race at 9.875 and Coca is first on bars with another 9.875.

8:54pm: Hyland, VT: FTY with a stick! That’s the way to lead off the rotation. Less distance than the fulls from LSU, but she found the landing.

8:55pm: Durante, UB: nice first handstand, Jaeger has good amplitude, maybe not as extended as I’d like. Pak is lovely. Final handstand might be a little short. Full in dismount, has to lean for the stick but doesn’t move her feet!

8:57pm: Hambrick, UB: gorgeous first handstand, lovely Ray. Bail is dead on, nice. A little bit short on final handstand. Sticks her full in! They’re starting to get their rhythm back, this is good.

8:58pm: Dukes, VT: Yhalf, stuttered that landing and looked a little unready for the landing.

8:59pm: Harrodl, UB: Hecht mount to immediate Zuchold, LOVE that. Jaeger looked good. Double front… and she sits it. She does not want to hear the feedback from Jay after that, she’s pretty clearly upset. She’s got to get her head back in the game.

9:00pm: Davis, VT: BIG FTY from her, and a stick! Definitely one of her better ones.

9:01pm: Edney, UB: pressure time. Gorgeous Hindorff to open, overarched her next handstand and lost her momentum. Doesn’t come off, but it’s not good. Bail is fine, DLO stick. Very important that she didn’t hop down though, hopefully that’ll be better than Ruby’s 9.175. Big opening for Kentucky here.

9:02pm: Rosa, VT: HUGE distance on the FTY, short on the twist and crunches badly on the landing, not her best.

9:03pm: Priessman, UB: Big Tkachev to pak, one of her better ones but not super clean. Great last handstand, stuck DLO.

Edney ends up with a 9.4, which opens the door wide for Kentucky to sneak in here.

Or not? Finnegan goes 9.975. Roethlisberger saying she got ripped off, and I kind of agree! Especially based on other perfect scores around the country this year.

This meet is unexpectedly close! The next two rotations, especially as tenuous as beam can be, will definitely keep things interesting.

9:16pm: Stuart, FX: a last minute lineup change here. Double pike to open, a little bounce out of it. 1.5 twist to front lay, front lay is nice and full. A little less dynamic on her dance elements, switch ring might’ve been a little shy of split. Rudi to close, a solid leadoff performance for them.

9:18pm: Hambrick, BB: Hitchkick to side aerial, such a quick connection, love that. Switch to switch side, lovely. Bhs loso, straight on. Roundoff double full, maybe a little foot wiggle but gets the stick crown anyway? Slow mo shows her just bringing her feet together, that’s it. We’ll see what reflects in the score.

9:21pm: front tuck through to Rudi, not mad at that combination. Bhs loso on the floor, interesting. I love the blue lipstick she’s got on, all the school spirit. Front double full, lands on the edge of her 8-incher, it’s a miracle she doesn’t stumble. Splits are good on her dance elements, dynamic choreo to finish. Love it!

9:22pm: Desiderio, BB: Front aerial, good. Bhs loso, super solid. Switch to switch half to beat like Macadaeg, maybe a little short on the half but super quick on the connections. She is so good on this apparatus, man, just wait til she’s an upperclassman. Stuck gainer full dismount.

9:24pm: Warren, FX: Front double full to open, lovely, dances out to avoid deductions. Good straddle positions. Rudi to back two-foot layout, interesting. Dramatic music but her choreo doesn’t really match to me. Front full to front lay, good. Not a lot of showmanship in that one, I’ve seen her perform that better.

9:26pm: Cannamela, BB: In for Campbell tonight, interesting choice. Bhs loso, big leg up but hangs onto it. Switch leap is a little short, straddle jump is fine. Standing loso, bobble, loses the connection into the beat jump I think. Short on the dismount, big step back to steady herself.

9:28pm: Hyland, FX: double pike to open this Mambo No. 5 routine. Oh apparently this segment of her choreo she does it in one direction, and then she completely reverses it. That’s cool! 1.5 twist to front lay to finish, solid control there. Not a big crowd-pleaser here in the PMAC, but a solid showing.

9:32pm: Korth, FX: Only the double tuck tonight, skips the full in for whatever reason. Strong split positions on her dance elements. Rudi loso for second pass, lovely. Not a super fan of this middle choreo bit in here, but she’s performing as best she can. Double pike to close, a little short, but pops it up really quickly. Just a little off tonight for her.

9:34pm: Finnegan, BB: Single wolf turn to open, still sad the triple isn’t coming back most likely. Bhs loso, you can hear her feet hit that beam with such solid emphasis. Switch to switch half, looks a little uncertain so she doesn’t go for the third jump, totally fine. Side somi, good! Side aerial to back full, stick! Another great routine for her tonight.

LSU has extended its lead yet again, 147.825 to the Cats’ 147.4. Roethlisberger keeps saying it’ll take a fall from LSU to be the “great equalizer” but on floor, LSU will not give that up easily. Beam is Kentucky’s best event though, so we’ll see!

9:47pm: Edwards, FX: ooh in the lead off position this week! Front double full to open, arabesque out of it. Love this medley of musicals for her, such a cutie. Double tuck a little short, pops up quickly though. Front lay to front full, solid. That’ll be a good score for her.

9:49pm: Korth, BB: one-arm bhs to loso, steady. Cat leap to switch to back tuck, nice. Roundoff to double full, little bit of helicopter legs there but a good one.

9:51pm: Kirby, FX: Good straddle positions to start off. Front lay to Rudi for opening pass, nice. Double tuck for second pass, a little short as she tried for the stick. Front lay to front full to finish, one of her good ones! Apparently in for Harrold after the bars mishap.

9:55pm: Priessman, FX: first time seeing her on floor this season. Full in!!! Yes, Lexie! A little out of control but keeps it in bounds. 1.5 twist to front lay (I think?) for combination pass, solid. Great leap positions. Double pike to close, solid! Great floor debut for her this season, much better than previous seasons where she’s had stamina problems.

9:56pm: Kwan, BB: Bhs loso, solid. Switch to ring stag, little unsure but covers well. Cat leap to side aerial to back tuck full, hey! Good routine for her! She needed that after some mishaps earlier in the season.

9:58pm: Edney, FX: Huge double arabian, aaaand a step out. I’d rather she overcook it than under, especially with the deep landings we’ve seen from her recently. 1.5 twist to front lay for second pass, solid. Gorgeous split positions. Double tuck to close, stuck cold. Robot, point and dab, jamming out like only she can. Disappointing OOB there but overall a good routine.

10:02pm: Judges conference before Finney goes? Wonder what that’s for.

Finnegan, FX: 1.5 twist through to 2.5 twist, seemingly stayed in but a little out of control. Double tuck, great control on that one, really dynamic. Front tuck into choreo, love this section where she really gets to show off her toe point and extension. Double pike, flirts with the line again but definitely in. Love that routine on her, she has such incredible precision through all her movement.

10:04pm: Hyland, BB: Split to ring stag, solid. Front aerial to bhs loso, nice! Cool hold in there in a planche-ish position? Cat leap to side aerial to layout back full, stuck! The “Beam Queen of Bel-Air” does it again!

10:06pm: Hambrick, FX: Opens with the best DLO I’ve ever seen her do! Holy cow, stuck cold! 2.5 twist to punch front, strong. Maybe a little short on her split full but that’d be splitting hairs. Double pike with great control to close. That could do it. She basically fixed her piking issue in the DLO, I could see this going big. Sigh, 9.975, just wouldn’t give it to her tonight, but by the end of the season, I see it happening.