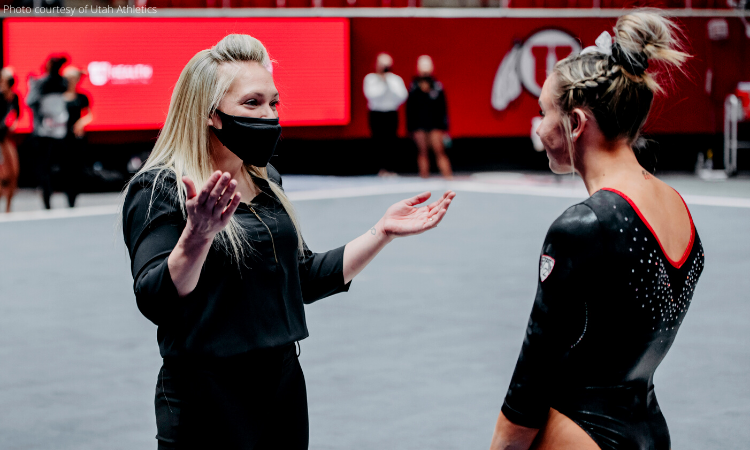 Last year, when Tom Farden took over as sole head coach of Utah gymnastics and announced his coaching staff—Garrett Griffeth as assistant coach and Courtney McCool Griffeth as volunteer coach and choreographer—fans were taken aback. Not because they didn’t think the Griffeths were good coaches but because for years they have wondered why the Olympian and former Georgia gymnastics star wasn’t being given paid opportunities at the collegiate level.

As a volunteer, McCool Griffeth is not in a paid position, and many felt that she was being reduced to an afterthought or accessory compared to her husband.

The Griffeths don’t see it that way.

The path to college coaching takes a winding, often itinerant road, with stops at different gyms, soaking up new experiences and taking on many roles before moving up to something a little bit better.

The Griffeths crisscrossed the country, valuing positions that required creativity and hard work over the ones that gave them immediate DI prestige. And they learned valuable things by taking on many different roles—from fundraiser and equipment supervisor to strength trainer and coach.

While McCool Griffeth has had opportunities to interview for paid roles, it’s always come down to making the best decision for the family. The couple has two daughters, 5-year-old Rae and infant Blakely, born last November. With small children, McCool Griffeth is grateful for the flexibility the volunteer position offers.

As far as the position not being paid, she says she doesn’t think about it too much as what’s most important is the opportunity for them to coach together.

“Our passion is to help the girls do what they want to do with their careers and win a championship. To be able to do it together has been a huge blessing,” she said. “It would be great to both be paid. [But] we appreciate the opportunity to do it together and to do it here at Utah.”

The couple has always wanted to make a name for themselves in the coaching world. They traveled across the country to get experience, and after their time at Georgia, they spent a year working at Cincinnati Gymnastics Academy. At CGA they learned more about developmental and elite gymnastics, eventually leading them to coach at Texas Woman’s University.

A two year-long stop at Arkansas gave them a chance to coach in the SEC, and after that, more opportunities presented themselves. “We’ve always kind of been firm believers that if you work hard where you’re at, the doors will open,” Griffeth said.

Farden says he was impressed with the couple’s experience at TWU, a Division II school. His own experience at SEMO, with only six scholarships to offer, taught him to be resourceful. Another of his assistant coaches, Carly Dockendorf, coached at Seattle Pacific University, also a Division II school. Farden admired the type of passion they showed coaching with limited resources.

McCool Griffeth brings her Olympic pedigree and storied Georgia career to Utah. Her years as an elite at GAGE, where she was coached by Al Fong and Armine Barutyan, set her on a path to the 2004 Olympics where she won a silver medal with the team.

In 2007, McCool later competed at Georgia under a full scholarship. From 2007-10, she was a standout in Athens, helping the Gymdogs to three straight NCAA titles from 2007-09. She is also the 2008 NCAA floor champion. She earned a bachelor’s degree in child and family development in 2011 and a master’s in sports management and policy in 2012.

While McCool Griffeth brings lifelong experiences to college coaching, much of what she’s learned from her many years as an elite stands out the most.

“[In elite] here’s a lot of things being thrown at you and a lot of high pressure, which I loved,” she said. “Growing mentally as an elite athlete is huge. It’s a skill that can be used in every aspect of life. I appreciate the investment my coaches put in our mental strength.”

When the couple met, Griffeth was an athletic training student working with the basketball program at UGA. He was also learning as much as possible about gymnastics so he could better understand his girlfriend’s sport.

He got the opportunity to work as a graduate assistant at Georgia alongside Jay Clark, the associate coach for Georgia at the time. Clark, now the head coach at LSU, was a mentor to both him and McCool Griffeth and still is today, and he believes collaborating with Clark was a huge benefit to him as he came up in the sport.

The couple has always worked the “leg events” of gymnastics. McCool Griffeth is in charge of floor while Griffeth coaches gymnasts on vault. During the shortened 2020 season, McCool Griffeth led Utah’s floor lineup to a top-10 finish in the NCAA, ranking No. 8. She mentored Sydney Soloski, leading the junior to earn regular-season All-America honors and her first All-Pac-12 selection on floor. Apart from learning more about gymnastics’ technical aspects, Soloski appreciates McCool Griffeth’s influence and dynamic personality.

“She came in with a very aggressive, detailed approach to practices,” Soloski said. “She made the floor an enjoyable event for everyone, whether they’re naturally gifted at it or not.”

Last year, Soloski competed on vault for the first time, something she never would have considered possible as a freshman or sophomore.

When Griffeth arrived at Utah, he had Soloski start training her Yurchenko full again, and the senior admits she’s never been a huge fan of the event in general.

“It’s an event that I’ve always kind of hated,” she said. “Garrett walked me through it and was like, ‘We’re not going to hate it. We’re going to find a way to get through it.’ I actually like it now. He’s a very patient coach to work with.”

Griffeth is not only known for his winning patience on vault, but he’s also considered to be one of the best recruiters in the country. He’s grateful for his time at Georgia working with Clark. Because of Clark’s well-known ability to recruit, Griffeth believes he picked up many beneficial tips, especially early in his career.

Griffeth also recognizes the recruiting experience at TWU, which is unique in and of itself. From a resource standpoint, Griffeth was not able to offer full scholarships at the Division II school. As a result, he learned to get creative in presenting opportunities for gymnasts and reasons to join that didn’t revolve around money.

Finally, he credits Farden, a “legend in his own right,” and responsible for much of his recruiting finesse. However, recruiting for the assistant coach has always been relational.

“It’s always been a goal to build a relationship first—for them to feel like, ‘Hey, I can go to this university, and I’m going to be taking care of,’” Griffeth said. “My wife and I have two young daughters, and these [gymnasts] are our family; they are around our kids all the time. We want them to make sure that they feel like they’re going to be taken care of.”

When scouting gymnasts, Griffeth starts with the floor level: talent. But it’s much more than that—the “ceiling” is personality aspects that can’t be measured.

“Intangibles like who’s really passionate about what they’re doing, who’s working hard and who really wants to win,” Griffeth said.

It’s these all-encompassing aspects of the Griffeths that attracted Farden to them when he was building out his staff after taking over as sole head coach when Megan Marsden retired. He believes adding the Griffeths established an attitude in his staff of coaches who have worn many hats, showing their passion and understanding for gymnastics at the grass-root level of NCAA gymnastics before anything else.

“I watched Courtney and Garrett from when they left Cincinnati Gymnastics until the day they arrived at Texas Woman’s. They caught my eye,” Farden said. “I wanted to get to know them better and understand their personalities a little bit more, and I was able to over the past several years. When we had an opening, that was the only call I made.”