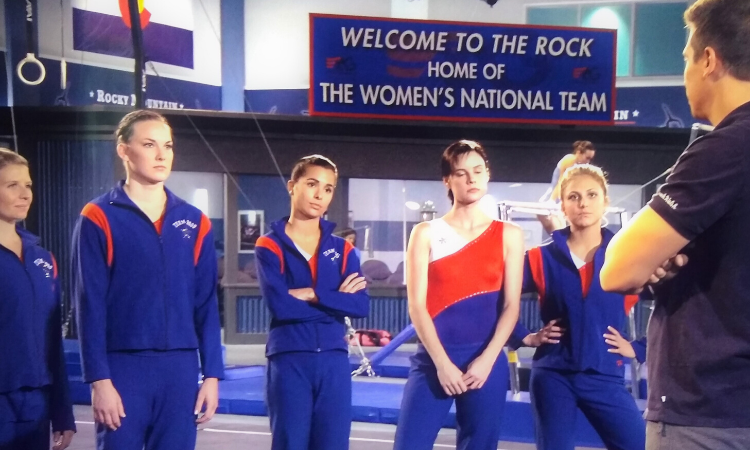 Emily’s running late to her first national team camp and can’t find her official team jacket. Chloe—who seems to be back to her usual self after acting like an actual grown-up in Episode 11—is too busy putting on her second coat of make-up to help. Emily finds her jacket, which Mother of the Year has washed with both bleach AND a pink thong (I’m guessing). 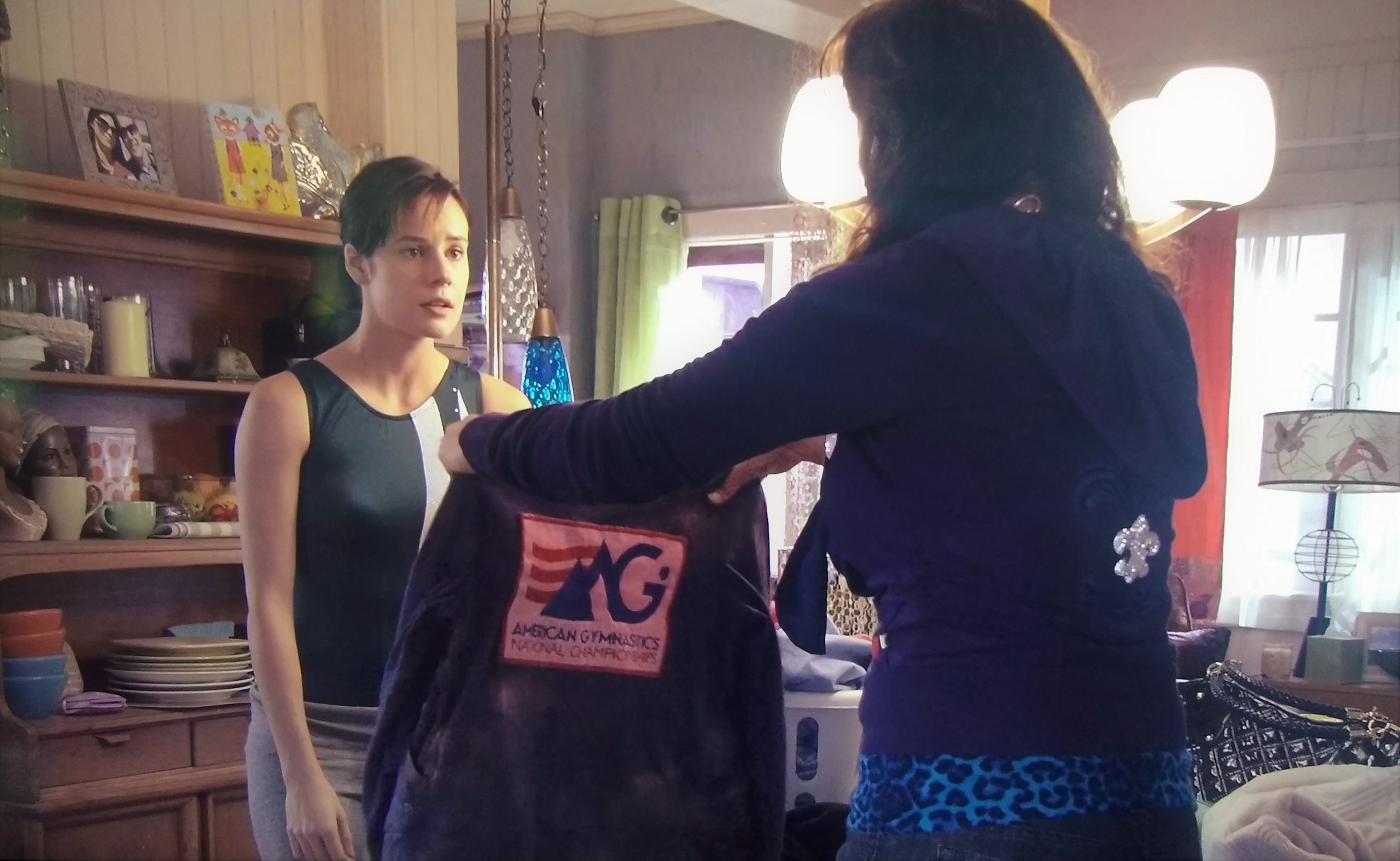 At The Rock, national team camp is getting under way, and the girls are anxiously awaiting the announcement of the new national team coach (presumably Sasha, since it’s his gym, his gymnast is the reigning national champion and he has three gymnasts on the team).

Kelly Parker shows up and is being her usual nasty self, calling Payson a pathetic has-been, which feels shitty even by her standards. Lauren and Kaylie temporarily put their beef aside to dunk on her: “I thought Friday was trash day…”

Payson is there for moral support, and Sasha offers to make her his assistant coach. She declines, which prompts him to make this face: 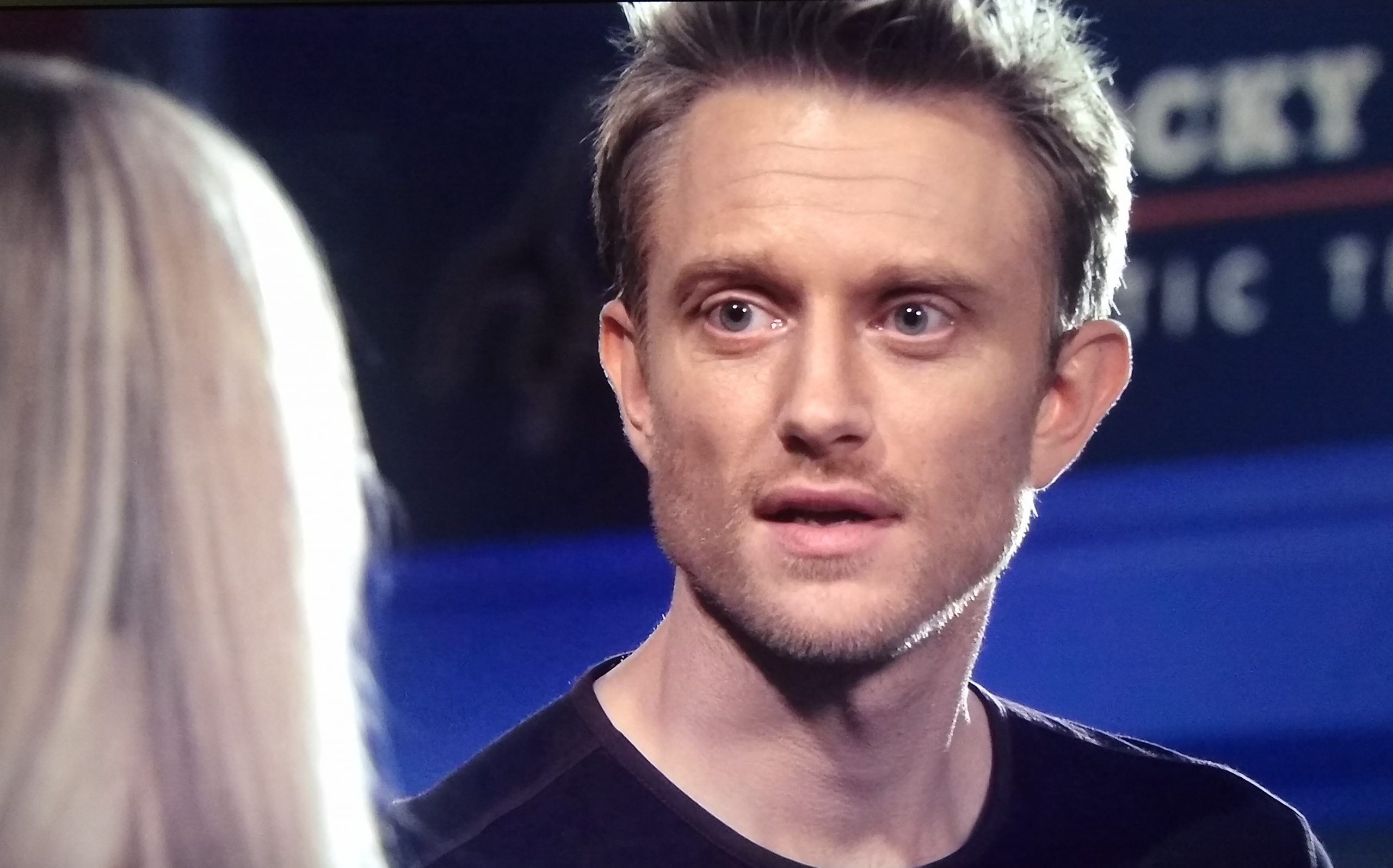 Emily and Chloe arrive just as the American Gymnastics head honcho is about to announce the new national team coach. Chloe makes sure everyone is focused on them by screeching, “Sorry we’re laaaate, toootally my fault! Don’t mind us. Carry on!”

After that totally necessary interruption, the announcement is made. In a shocking twist, Sasha isn’t the new coach… Marty is. 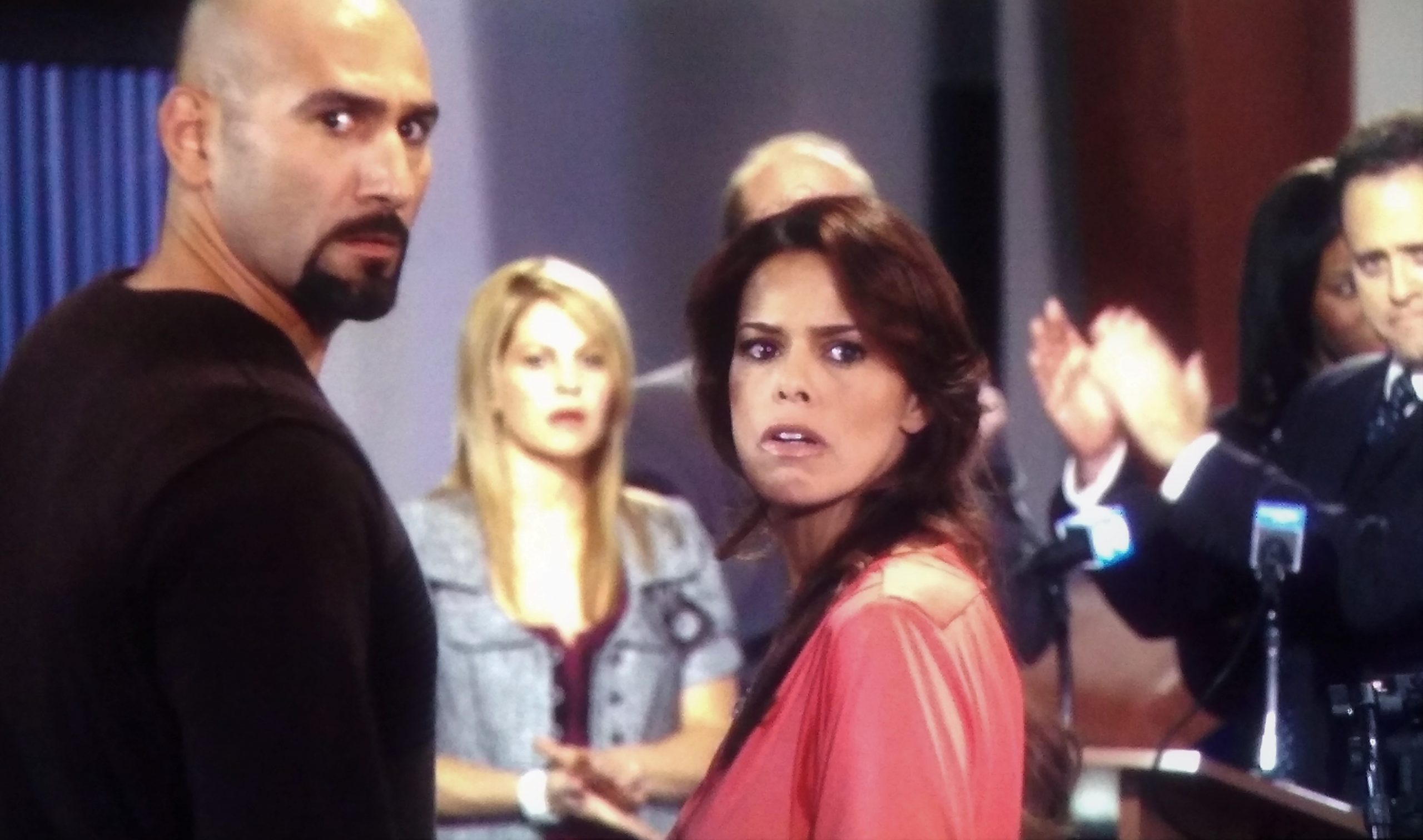 Afterward, the Steve Penny-ish guy wants to have a word with Emily and her mom. He threatens to kick her off the team if she doesn’t pull up her math grade to at least a B… Because if there’s one thing this country is known for, it’s holding its athletes to the highest academic standards.

Understandably, Kaylie isn’t super thrilled to be coached by a man who not only abandoned her and her teammates three weeks before nationals but also had an affair with her mom. She and the other girls agree to meet at the Pizza Shack to discuss the situation.

At Pizza Shack, Razor’s being a real wad. He’s still giving Emily crap for dating Damon instead of him because he was there first and it’s his right as A Nice Guy™. Since her friends are on their way, Emily finally has to tell Razor about being an elite gymnast. He responds to this revelation by calling her “a Gumby girl.” Gee, I can’t imagine why she doesn’t want to date you, creepy little incel… 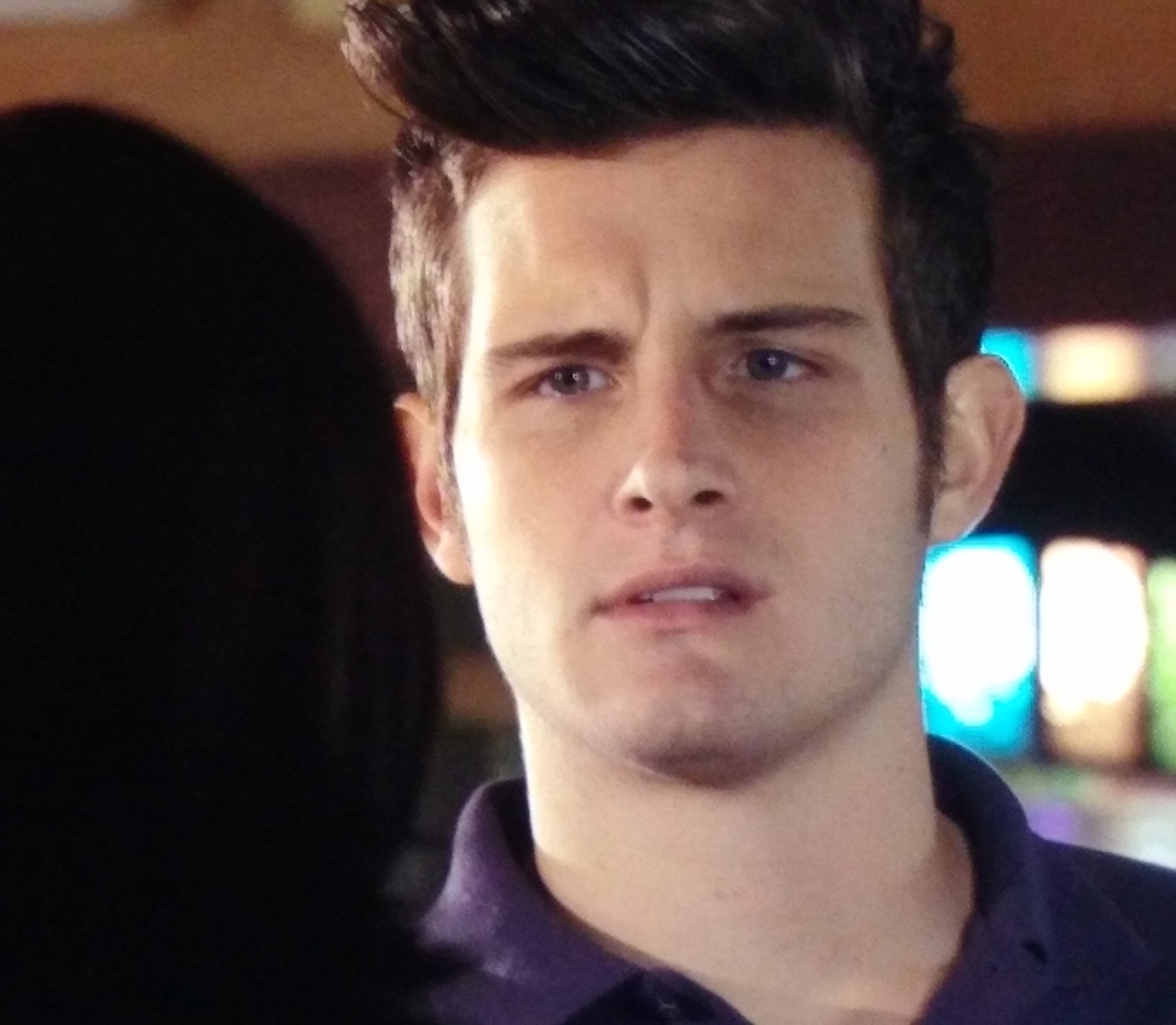 The girls discuss ways to get Marty fired as national team coach, including telling not-USAG about his affair with Ronni and subsequently being blackmailed by Lauren’s Daddy. Payson realizes that the one benefit to breaking her back is not having to put up with all this gymnastics drama anymore, so she leaves. 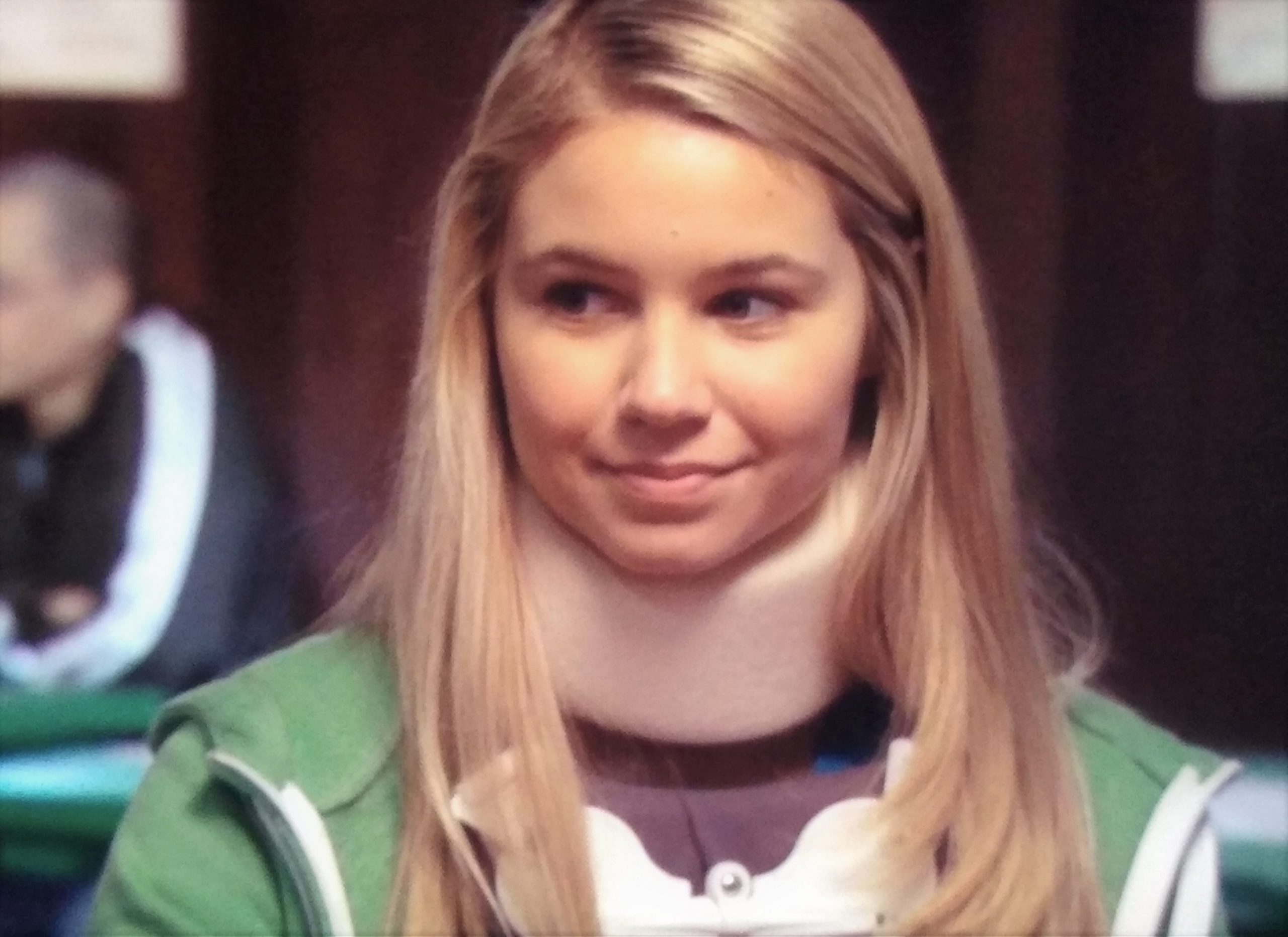 Back at Chateau Cruz, Kaylie blames her mom for making the Marty situation so unbearable. Her dad chooses this moment to walk in and announce that he thinks someone paid off the national committee to hire Marty and he’s going to investigate. Kaylie does her mom a solid, and talks him out of it.

Back at Pizza Shack, Emily is struggling with her algebra homework when her mom comes in. (Remind me again why the woman with seemingly infinite free time doesn’t have a job but the 16-year-old elite gymnast does.) Chloe immediately begins flirting with Razor WHO IS 17. I can’t… 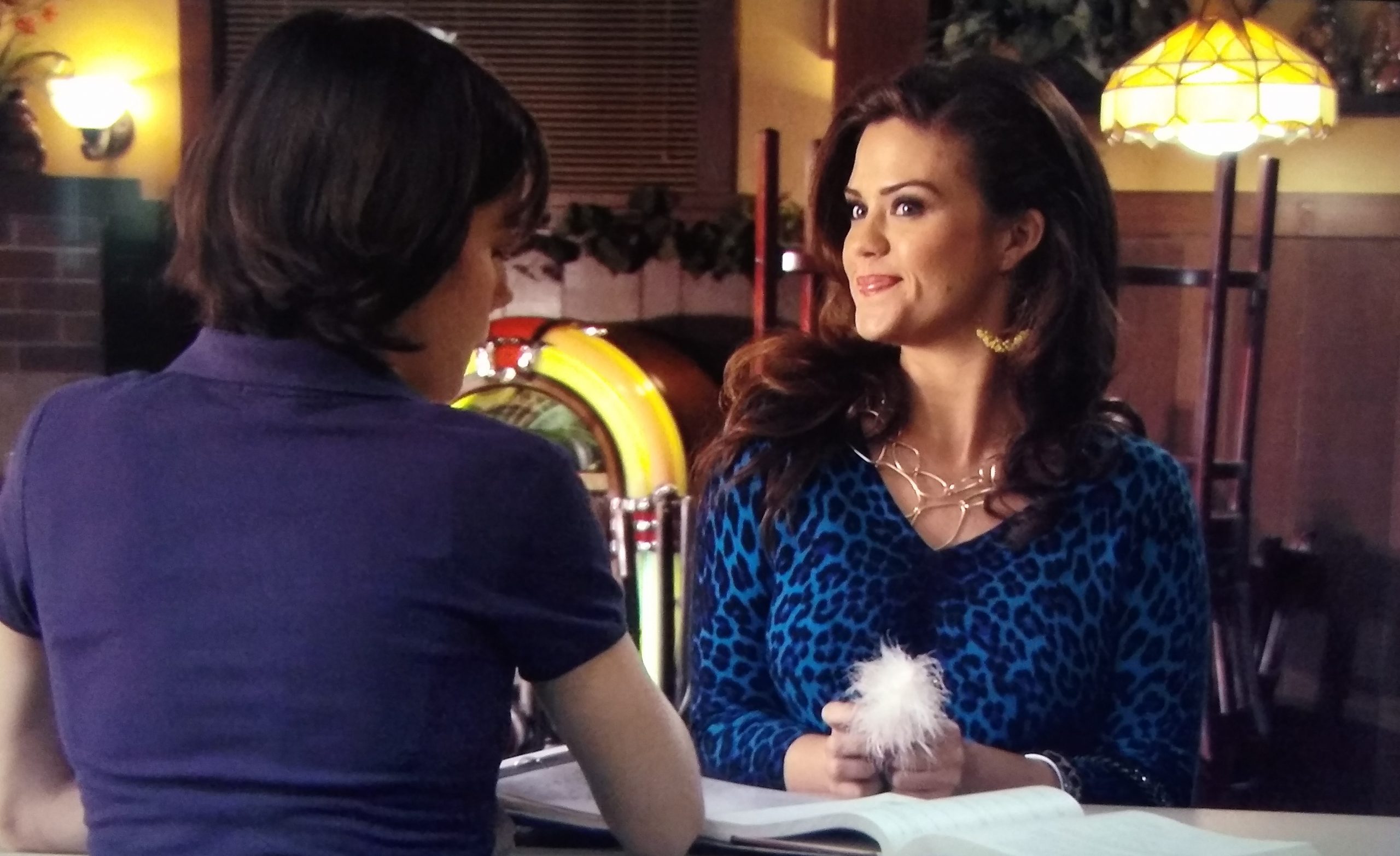 The next day, the first national team camp is officially under way, and Marty is giving the gymnasts a speech about being held to “high moral standards.” This goes over about as well as you’d imagine.

For some reason, he doubles down and tells the team, “If you have any questions about what I’m like as a coach, ask The Rock gymnasts I used to coach!” I have to assume this is some form of self-immolation. 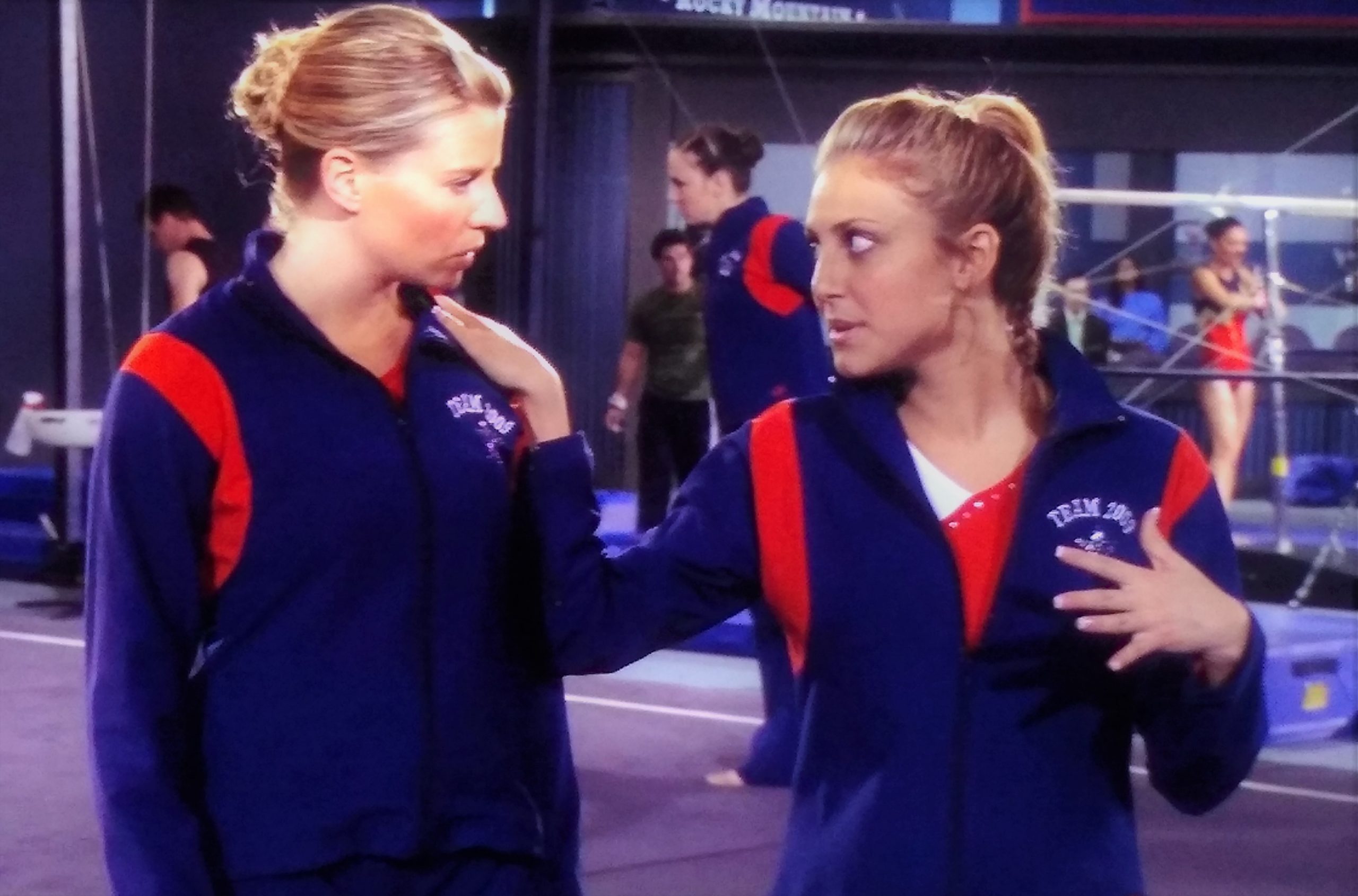 Lauren tells this gymnast that Marty’s “really handsy,” which leads to a sequence of progressively awkward contortions when he tries to correct her posture. 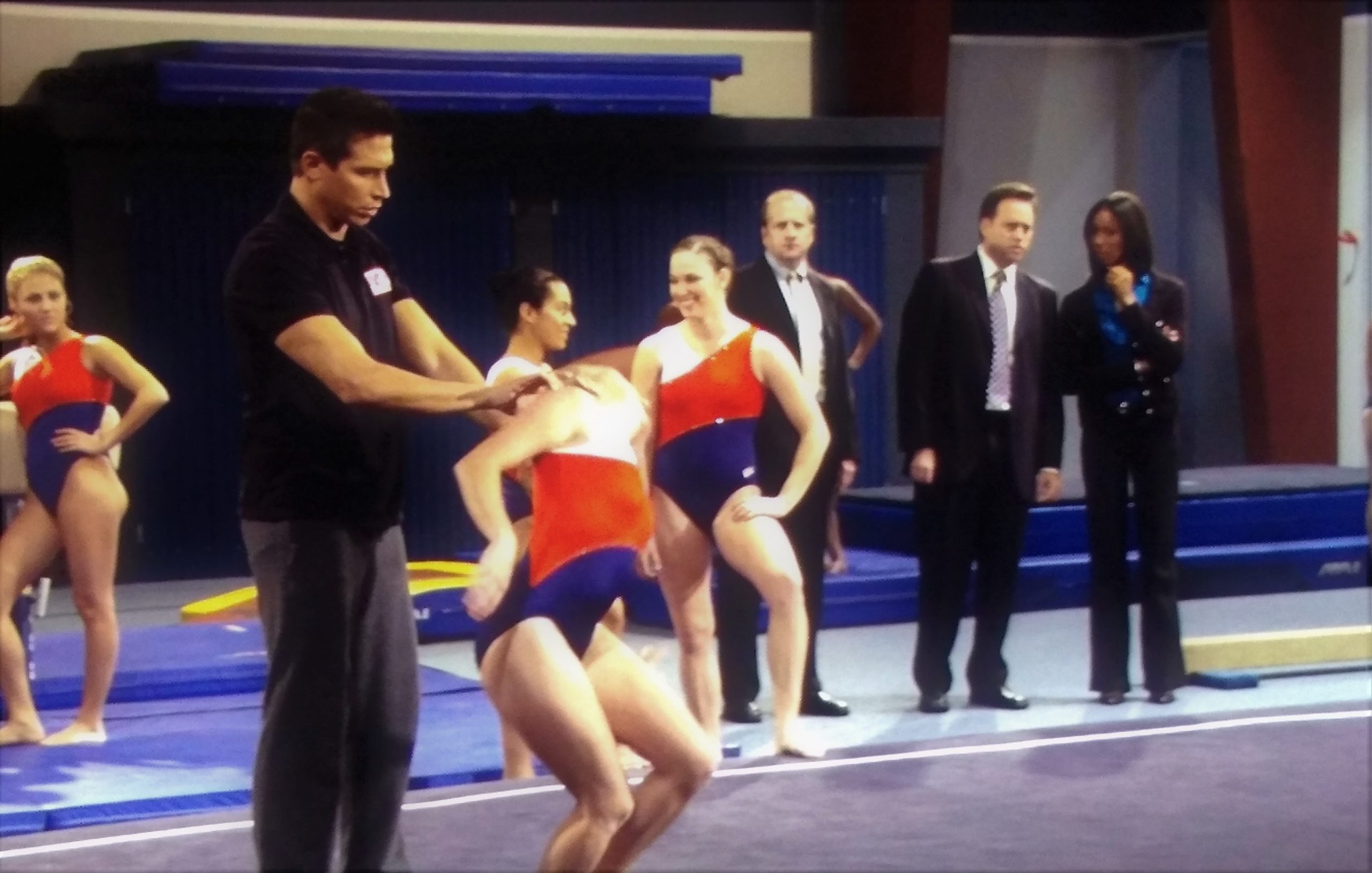 Also, Renae Moneymaker handing Marty a box of Tic-Tacs after Emily claims he has bad breath is hysterical.

Sasha figures out what his gymnasts are doing, and lays into Kaylie for being a crappy leader. Frustrated, she inexplicably calls Carter for help.

Sitting in her car, she pours her soul out to him about how everything sucks and she’s not getting to enjoy being national champion because she’s surrounded by a bunch of lying, cheating, sex-havers. He makes some speech that’s more gaslighting than apology, but they still end up making out. To Carter’s credit, he pumps the brakes and Kaylie promptly tells him to GTFO. He does, but says, “You can lash out at me and hurt me back, but we are soulmates.”

Emily gets home to discover Razor’s chilling in the kitchen with her mom. Ew, just ew. Chloe has convinced him to be Emily’s algebra tutor pro bono (“That means for free!”).

Marty approaches Payson as she’s leaving and tells her how much he admires her and offers her a coaching position. She’s still not interested. Kim asks her why she won’t even consider coaching. Payson says it’s because that feels like admitting her career is, in fact, over. Kim gets it, and drops the issue because she’s a competent parent.

Next morning at The Rock, Chloe asks Emily why they just can’t ask Marty for another team jacket.

Emily (nicely) asks her to please stop trying to help her with anything gymnastics-related because she generally ends up doing the opposite of helping. Truth hurts, don’t it? 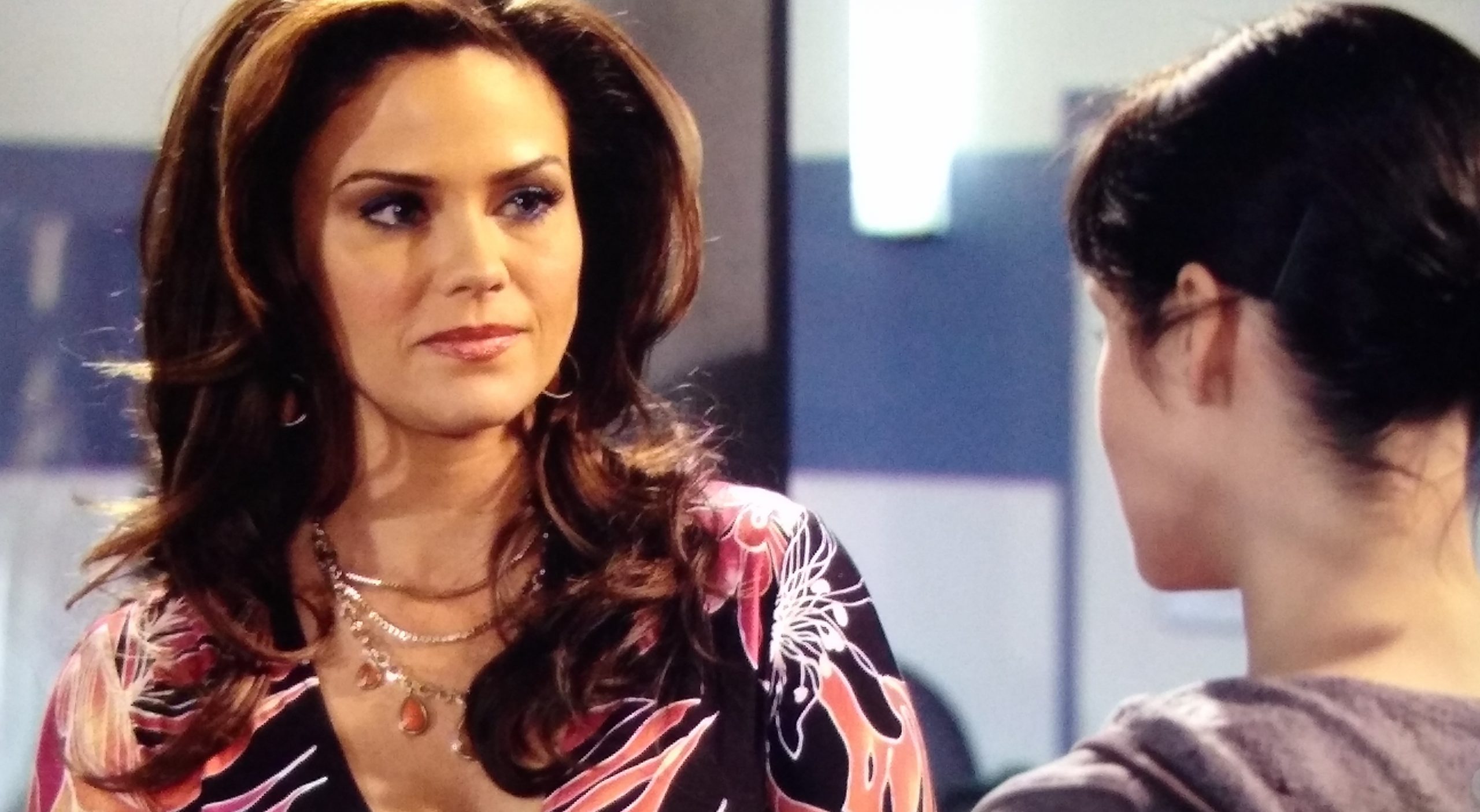 After a single practice, Marty has decided it’s time to announce his picks for the first assignment: A six member team that will travel to London and compete against the EU team.

He calls out six names, including all three of The Rock gymnasts. In yet another shocking twist, they are the six who were not selected. When Kaylie protests, Marty says that he and the selection committee unanimously agreed that they were acting like lazy brats.

Lauren then tells Kelly Parker to stuff it, which is absolutely amazing.

Kaylie tells Lauren and Emily that she’s decided to tell her dad about Marty and her mom’s affair, presumably so that he has Marty forcibly removed or straight up murdered. Either way, their Marty problem will be solved.

Payson arrives at The Rock and is almost immediately confronted by Kelly Parker. Surprisingly, she offers genuine sympathy and regret over Payson’s injury. She says, “I know I’m a bitch, but I’m really going to miss you… You were a challenge, unlike Kaylie.” Payson snaps back, “Leave. Her. Alone.” Even with a broken back, Kelly Parker is afraid of Payson (as she should be). 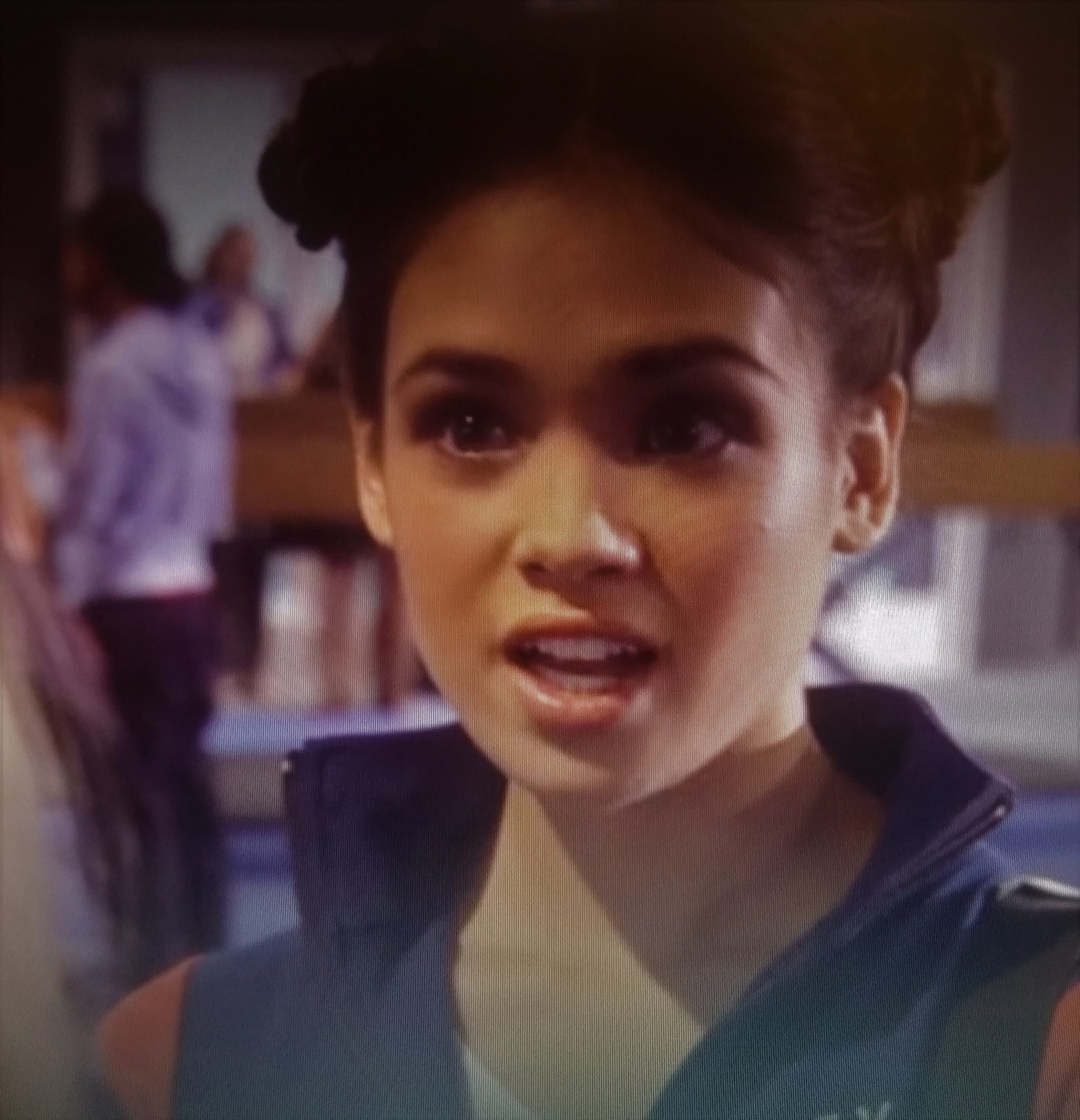 She also tells Payson that even if they do manage to get rid of Marty, the national committee will never pick Sasha to replace him since his star gymnast broke her back on live TV.

Payson confronts Sasha, asking why he’s allowing himself to be punished for her injury. He reveals that during his coaching stint in Romania, one of his athletes died after refusing medical treatment after a fall. (FYI, this can actually happen and is why it’s so important to be evaluated after any sort of head injury, no matter how seemingly minor.) Payson asks if there’s anything she can do to make it up to him; he says to get the other girls to quit being assholes and support Marty before they’re all kicked off the team. He also tells Payson that, like it or not, she’s a leader and needs to lean into the role.

Kim and Alex are in the viewing room commiserating about being gym parents. He’s not sure what his role is if he’s not Kaylie’s overbearing manager. Kim’s not having it, telling him to just be a good dad and appreciate his family.

He goes home and looks through photo albums. He then thanks Kaylie for firing him and apologizes for his past shortcomings, saying he doesn’t know what he’d do if he lost his family. Of course, she doesn’t have the heart to break his and doesn’t tell him about the affair.

Meanwhile, Summer is proctoring Emily’s algebra exam. She asks Emily why she doesn’t have a jacket. Emily confesses that it’s her mom’s fault and she always ruins things. Summer reveals that Chloe had been begging Marty for years to come to Fresno to watch Emily, sending dozens of letters with lipstick kisses and weirdly elaborate crafts until he agreed. 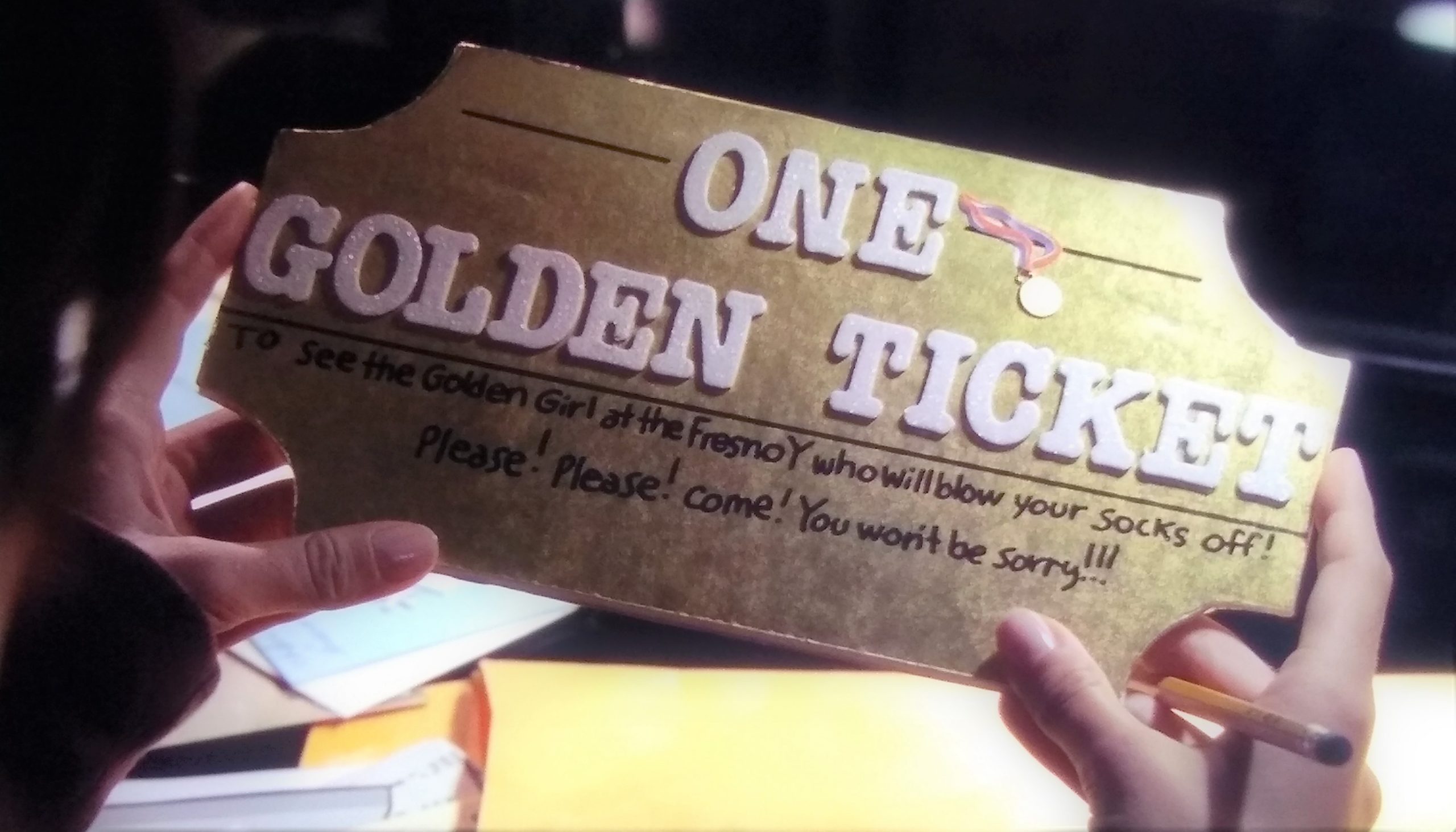 The next day, The Rock girls are conspicuously absent from the national team photo shoot. They’re inside the gym debating whether or not they even want to be on the team if Marty’s coaching, blah blah blah… Enter Payson. She tells them it’s her fault Sasha wasn’t picked and won’t be picked, but that they’re wasting their opportunity and need to start acting like professionals and champions before she kicks their asses. Also, I guess she’s coaching now. 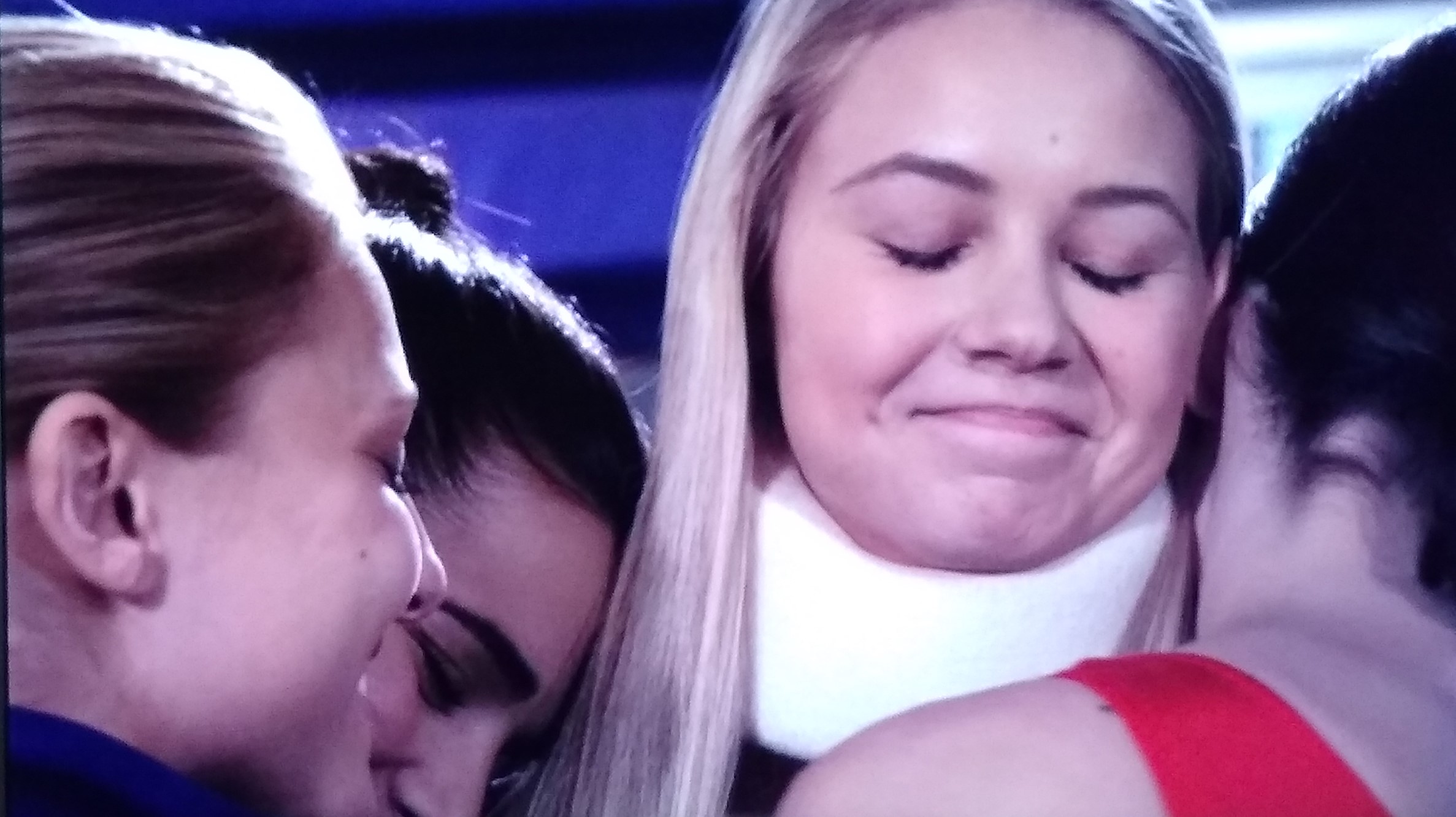 The girls go outside, and Chloe delivers Emily’s miraculously good-as-new jacket! Turns out Summer called in a favor and got a new one for her. During the shoot, Marty has national champion Kaylie move front and center, displacing Kelly Parker.

At Pizza Shack, Razor opens the results of Emily’s algebra test (which is in an envelope for some reason). Obviously, it’s an A and they hug. Damon chooses that precise moment to call… 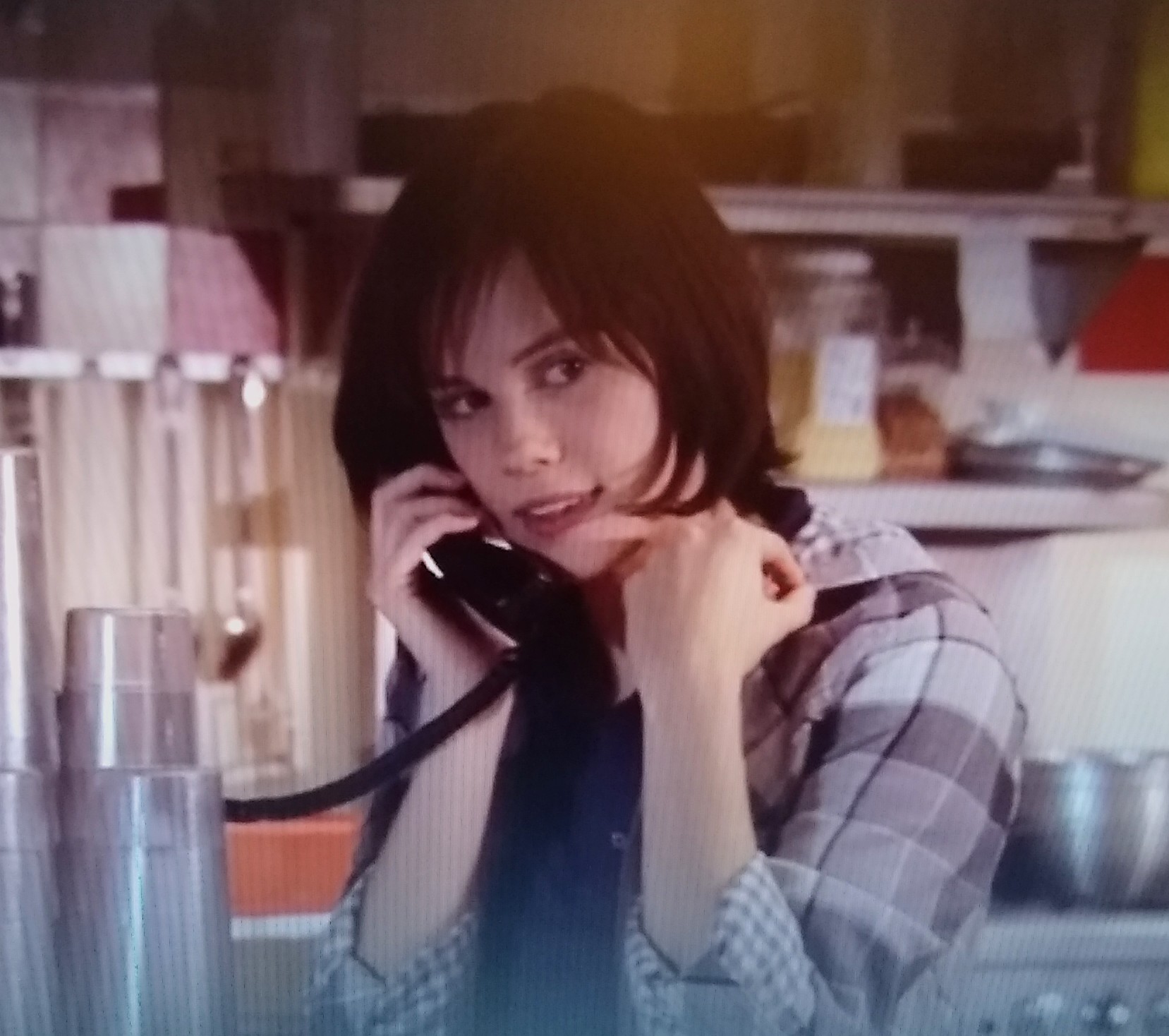 Faker Than That Golden Ticket Convincing Marty to Come to Fresno

Like Emily’s D score on bars, episode 12 gets a respectable three.