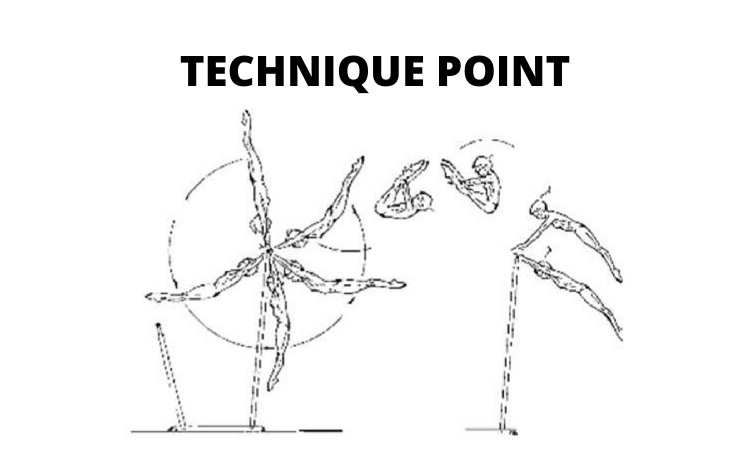 Many college bar routines are built around a single-bar release. Having this skill is important because it’s a common way to bring a routine “up to level,” which means it adds enough difficulty to be considered competitive in college.

One of the most common NCAA gymnastics single-bar releases is the Jaeger (straddled or piked). Since it’s a D-level skill, gymnasts will typically connect other elements before or after the release to take advantage of connection value (CV) bonus. However, to do this (and avoid standard deductions on the skill itself), the Jaeger must be executed using proper technique.

There are some beautiful Jaegers in NCAA gymnastics, as well as some that could use improvement. Using an example of each, let’s examine the ways technique can affect the skill.

The gymnast on the left (Gymnast A) performs a beautiful straddled Jaeger using proper technique and execution, while the gymnast on the right (Gymnast B)—who’s retraining hers—just misses the release due to slight deficiencies in timing and technique.

The first part of the skill is the tap, which provides “fuel” for the release. Many people are aware of the tap concept when it comes to back giants, but maybe not so much on forward ones. The forward tap is pretty much the opposite of the backward one, in that it goes from a straight/slightly arched body position → hollow → tight arch (heel drive).

This is where the difference between the two Jaegers begins. 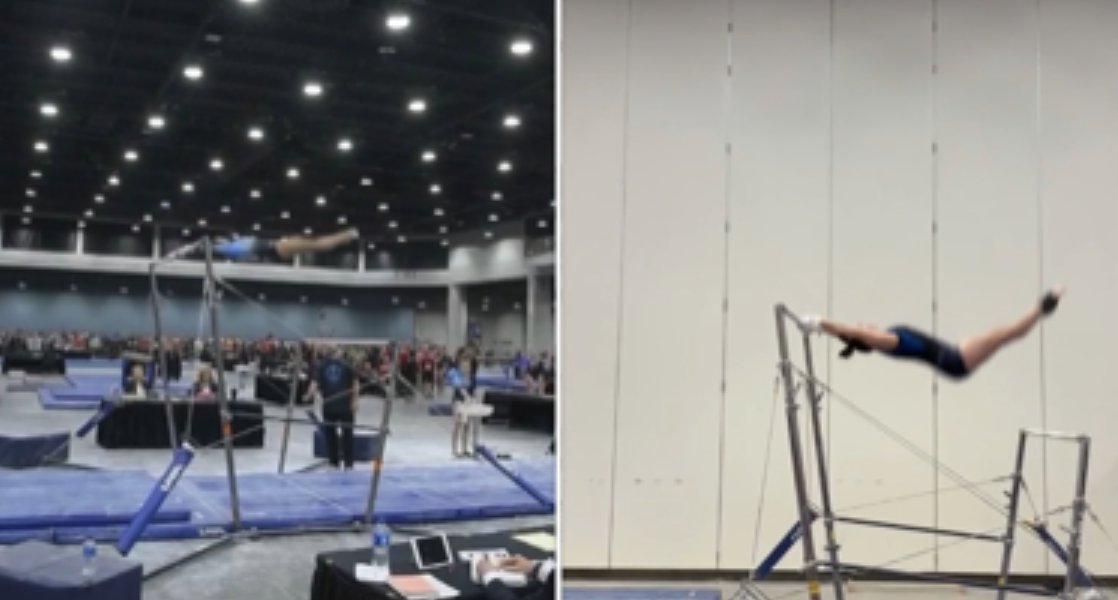 Gymnast A holds the straight body position in the first part of the tap for much longer than Gymnast B. She’s essentially in “free fall” for longer, which allows her to build momentum for the Jaeger. By piking sooner—and much more aggressively—Gymnast B slows down the entire skill and will have to do a lot more work than Gymnast A to catch the bar. 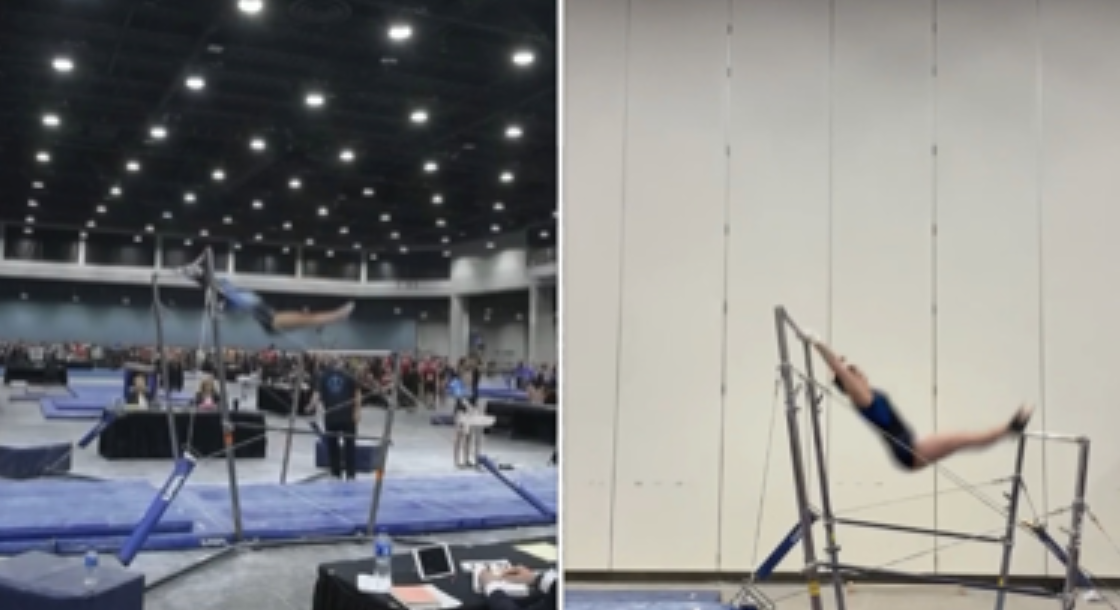 You can see the differences in the shapes at this point, which is when Gymnast A begins to pike her hips. Besides slowing down the fall, the piked position helps the gymnast wind up for her heel drive in the last part of the tap. By piking too early, Gymnast B also throws off her timing for the heel drive, which determines the rise on the Jaeger. 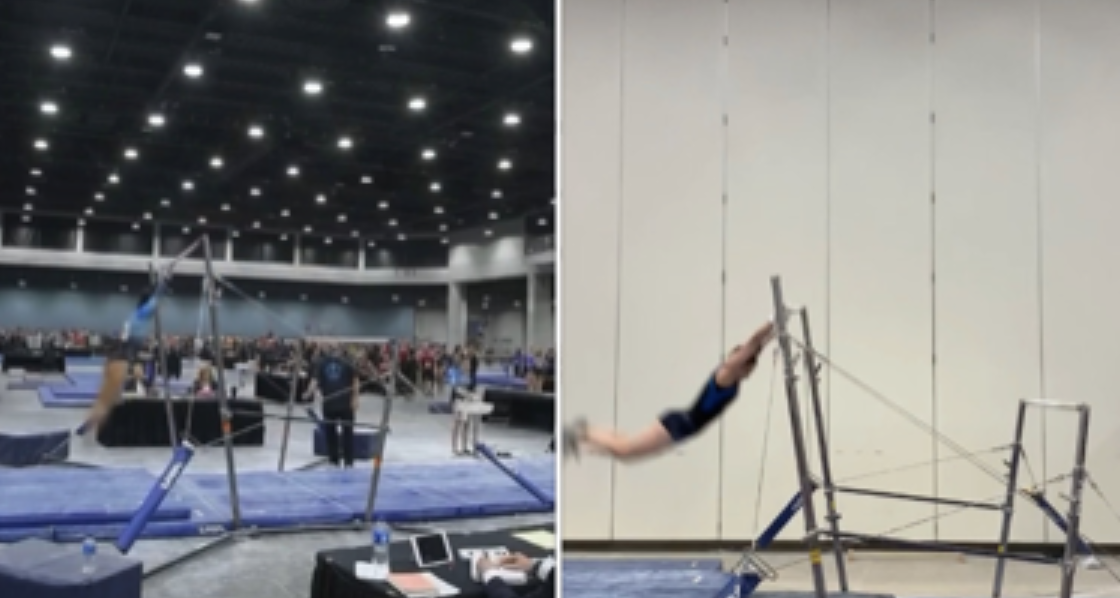 The result is that Gymnast B then kicks much earlier than Gymnast A, and with more emphasis. She overcompensates for her rushed timing with a more forced kick, in an effort to get the skill to rotate at the level of the high bar (the minimum height needed to catch the release). Gymnast A, on the other hand, taps with later (and more proper) timing, which makes it easier for her to get amplitude on the skill. 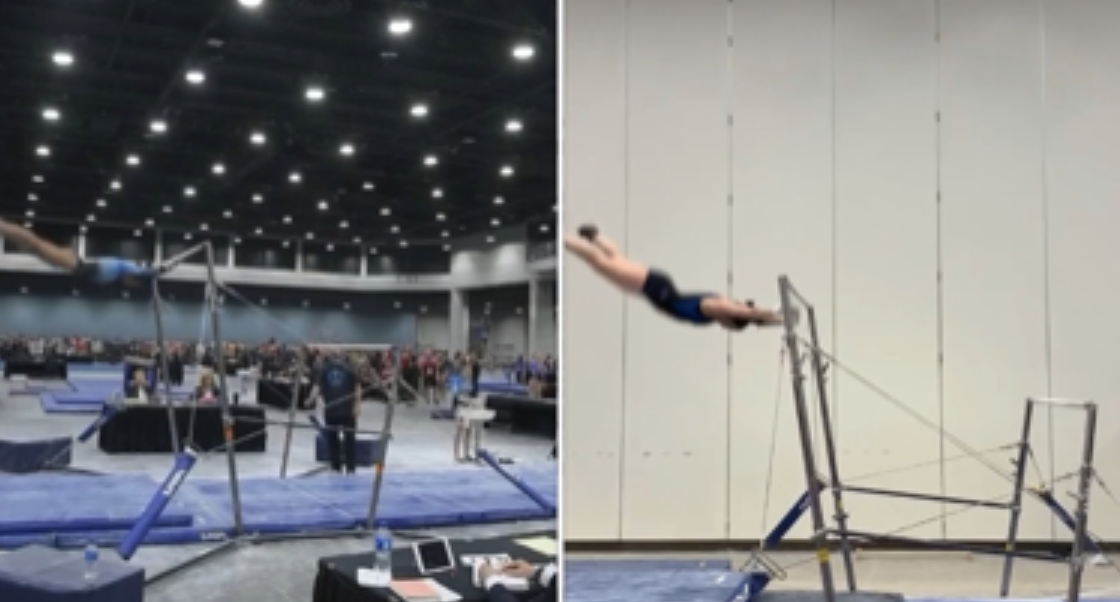 This is where Gymnast B releases the bar, while Gymnast A remains much more patient. By holding onto the bar longer, Gymnast A allows her feet and hips to continue rising, increasing both the height of the skill and the time she’ll have to catch the bar.

Releasing later also means Gymnast A’s hips (the central, transfixed point that she’ll rotate around) are closer to the bar. Since Gymnast B releases much sooner, her hips are farther away from the bar, making it harder for her to reach and catch the bar again. 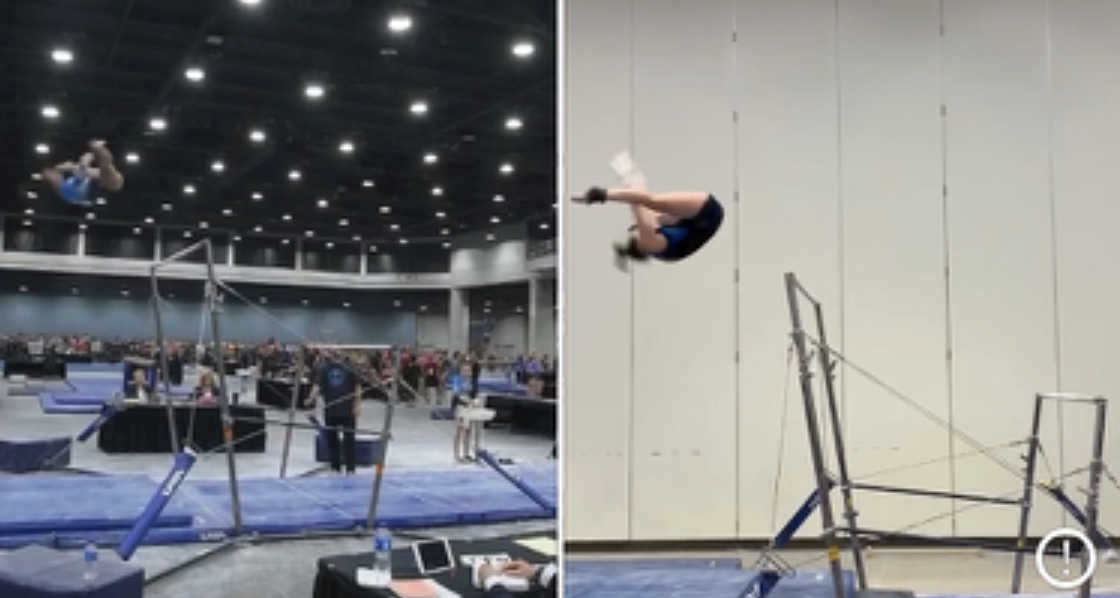 Since Gymnast B released earlier, she should be in a more rotated position than Gymnast A by this point, but she isn’t. This shows that Gymnast A also has a much faster “sit up,” which is the action that occurs after the gymnast releases the bar and before she catches it again. This is where the skill’s rotation happens, and by rotating quickly, Gymnast A will have even more time in the air to spot the bar before catching it.

Another element that gives Gymnast A more time to catch is the skill’s height. She’s probably close to two feet above the bar, whereas Gymnast B’s hips were just level with the bar when she reached for the catch. This gives Gymnast A a lot more time to see the bar, judge her distance from it and make adjustments accordingly. 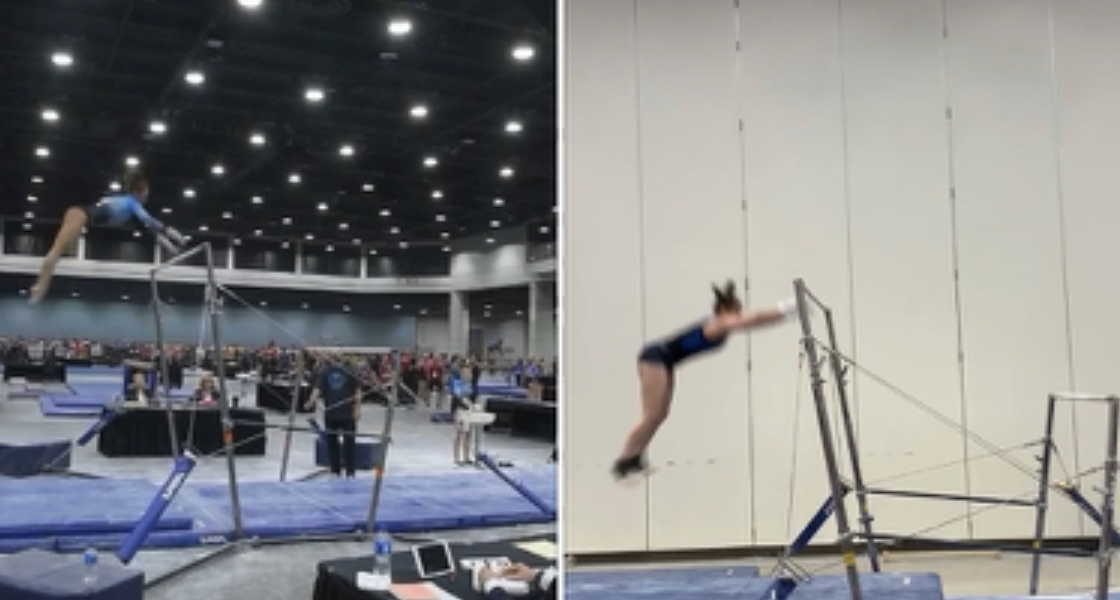 Because she released the bar earlier, Gymnast B was ultimately too far away to catch it again— whereas Gymnast A is in an optimal position to grab the bar and swing out of the skill. She’s finished the straddle before she catches the bar, which gives the skill a beautiful, completed and finessed look.

A few months ago, I made this side-by-side video for Gymnast B’s coach, who was working hard with her athlete to improve this skill. After a few weeks, she sent back a video of her catching the bar. Technique is everything in gymnastics! 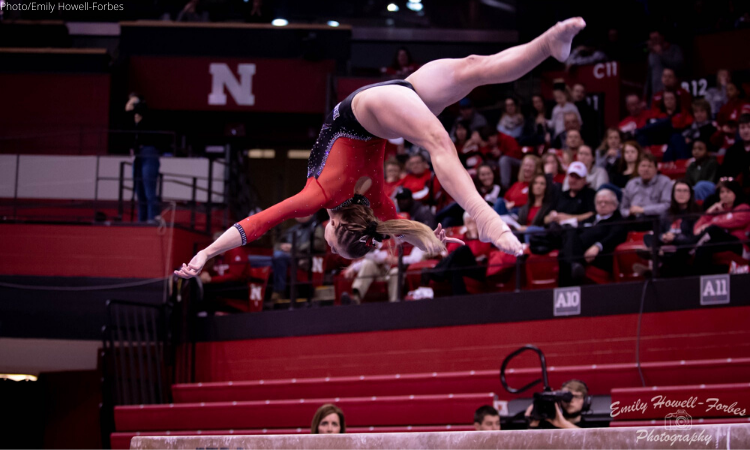 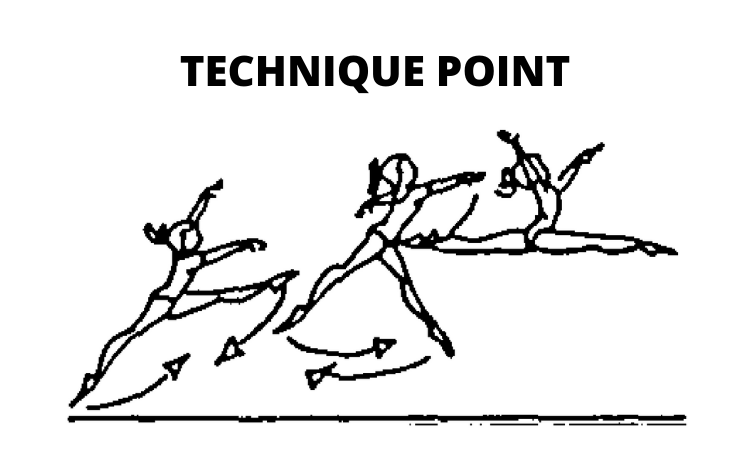 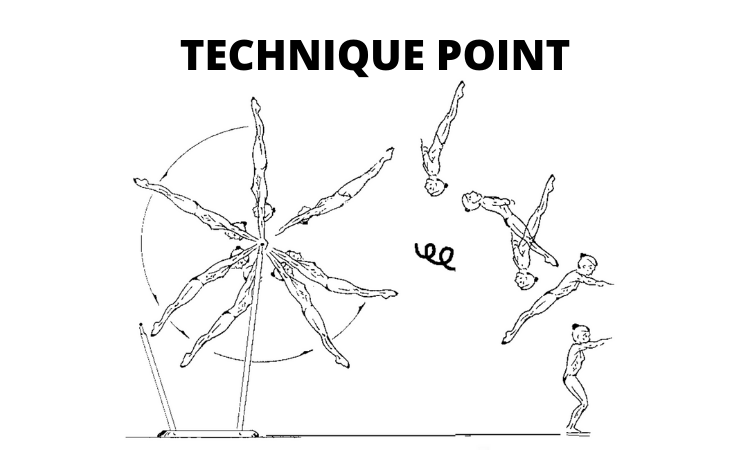