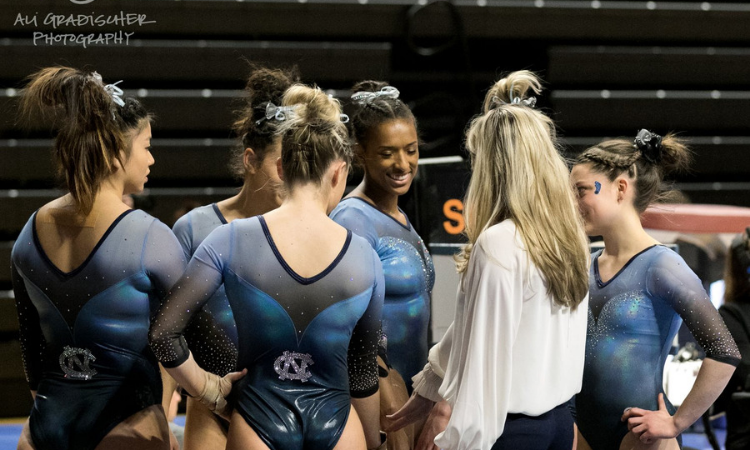 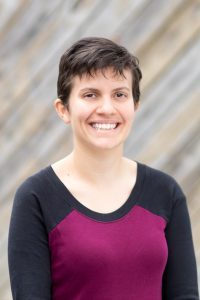 Christina Chauvenet has never been one to back down from a challenge. She is well-known within the college gymnastics community for providing engaging and insightful commentary during North Carolina home meets, and the means by which she secured this role is equally noteworthy. She has neither an elite gymnastics pedigree nor formal broadcast training yet has managed to make herself an essential player in the Tar Heels’ gymnastics program.

Like many children in the early ‘90s, Chauvenet watched Kim Zmeskal, Shannon Miller and Dominique Dawes twist and soar and said, “I want to do that!” The difference was that Chauvenet’s cerebral palsy was, at that time, severe enough to make doing the sport herself nearly impossible. Still, her passion for gymnastics—and desire to try it for herself—persisted. By the time she was 10, Chauvenet’s persistence paid off, and she gained the medical clearance from her doctor to start classes.

“I was a pretty terrible club gymnast,” she said. “The climax of my career was competing level 3, yet that experience gave me a different perspective: My peers were training levels 9 and 10; I had to work just to be allowed to train. I worked for every skill.”

That perseverance and passion enabled Chauvenet to train well into high school. While she wasn’t able to physically perform higher level skills, the exposure fed her knowledge and understanding of the sport, both the technical components and the effort required to master each element. Despite stopping training for good at 16, her gymnastics career was far from finished.

Over a decade later, Chauvenet entered the University of North Carolina as a doctoral student studying public health with plans of being just an “average fan” before fate intervened.

“My husband was waiting tables and ended up serving Lexi Capalli [a team member from 2012 to 2016],” she said. “So I started looking up clips of her and the team and noticed they just had the single commentator. I had no broadcasting experience but thought, ‘I could name the skills or explain the deductions.’”

Inspired and with nothing to lose, Chauvenet turned to the university’s staff directory and found the sports media director’s contact information and emailed offering to help. He responded almost immediately with an invitation to call the Tar Heels’ home opener against Auburn that Friday.

Despite the tight timeline and her decided lack of broadcast experience, the opportunity was too enticing for Chauvenet to pass up. “I remember prepping for that meet but not really knowing how to do that,” she said. As for actually calling the meet? “I immediately loved it! Afterwards, I saw someone comment on Twitter about how they really liked me! That meant so much.”

Five years later, Chauvenet has grown into a seasoned commentator who has called dozens of meets (though she still struggles with thinking of herself as part of the media). Frequently at her side is Brian Ware, the original voice she heard when researching Tar Heel gymnastics clips all those years ago.

“He’s great to work with because he has an actual degree in broadcasting, and he helps keep things on track. We work well off each other.”

Ware, like many college broadcasters, provides commentary for six or more sports during any given athletic season and must have a working knowledge of each. For Chauvenet, this makes his continued willingness to learn about gymnastics all the more impressive.

“We’ll be watching warm-ups or something, and he’ll ask me to teach him the names of the different skills and passes so he can use them in the broadcast.”

Chauvenet similarly continues to study and hone her own craft. “That first season [in 2015] was rougher because I was still learning,” she said. Now, her preparation looks quite different. In addition to rereading the NCAA code of points before each season, Chauvenet watches each broadcast to critique her own commentary as well as looks for feedback online.

“I’m very aware of my mistakes!” she said. “I will say one of the things that’s been so gratifying has been getting positive feedback and interacting with the gymternet, but also I take constructive criticism very seriously.”

Chauvenet encourages viewers to engage as much as they can on social media. “Let commentators know what you’re enjoying and what you’re not,” she said. “It is live, so mistakes will happen; critique with grace because it is really hard to call a live meet. However, the people doing it need to be held accountable in a productive way.”

North Carolina head coach Derek Galvin certainly appreciates her efforts. He describes Chauvenet as “a wonderful addition” to the broadcasts. “We have Tar Heel fans all across the country, and Christina [provides] a tremendous gift for all the fans who cannot make it back to Chapel Hill to see the meets live,” he said.

Galvin’s and Chauvenet’s relationship is a collaborative one, as evidenced by the personalized anecdotes and exclusive details that suffuses her commentary. She considers getting to know the coaching staff and team among the biggest perks of her media role. “[They] have been so welcoming to me and invite me to practice and things, which helps make my coverage better.”

For Galvin, the feeling is mutual. “She is very perceptive and has a great eye for technique,” he said. “Our team members enjoy chatting with her whenever she stops by practice, and they appreciate and respect her commentary as insightful and honest.”

Both Chauvenet and Galvin hope the recent launch of the ACC Network will help bring improved coverage, accessibility and visibility for women’s college gymnastics beyond team or conference broadcast platforms. Chauvenet appreciates the significant strides made over the last decade but knows there is still plenty of room to grow.

“I would like to see better resources like what the top teams get—things like protractors or vault height graphics—available across the board,” she said. “In terms of actual commentary, we need more people trying to explain the deductions in a comprehensible way. We can’t be afraid to talk about deductions in a positive, constructive way to inform the viewer.”

In addition to critical analysis, Chauvenet wants broadcasters held to a higher standard when discussing female athletes in general (and gymnasts in particular).

“There’s an important shift that needs to happen in [gymnastics commentators’] language. I know they don’t mean to be infantilizing, but you don’t hear men’s basketball commentators referring to the players as ‘boys.'”

She recalls how during one of her very first exchanges with Galvin, he requested that she take care to always refer to the gymnasts as either “women” or “athletes,” never “girls.”

“In women’s gymnastics, more people are saying ‘women’ or ‘athletes,’ but there are still plenty saying ‘girls,’” Chauvenet said. “That language is so important in breaking down stereotypes of decades gone by where people thought the only ones who could do gymnastics were little girls.”

It’s a challenge that, true to form, Chauvenet is ready to tackle head on.

“At the end of the day, it’s about how we are portraying female athletes in media, and I want to be a part of the narrative that these women are powerful, grown-up, badass athletes.”