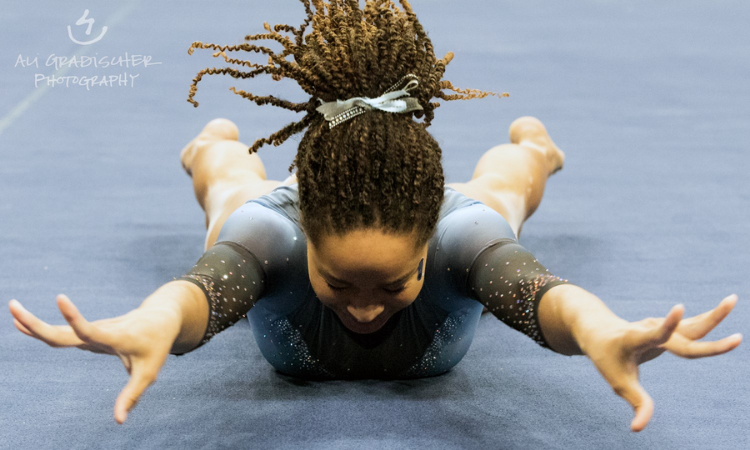 Get ready for some conference rivalry fun, folks! North Carolina is off to a strong start, securing the top spot in the EAGL rankings. To absolutely no one’s surprise, the Tar Heels are still great on vault and floor. More of a surprise? Their beam lineup has looked pretty impressive and bars have been pretty okay (excuse me while I go knock on wood while throwing salt over my shoulder). Pittsburgh, meanwhile, is still finding its groove, though it has turned in impressive performances on bars and floor in its first two meets (not to mention several individual event titles).

The meet will be streamed on ACCNx January 25 at 4:00 PM with live scoring available here. As always, commentary will be provided by the always excellent Christina Chauvenet and Brian Ware.

Bless you, Christina, for confirming this is a new leo!

Brechwald (Pitt): She’s just chilling waiting for the judges to finish conferring over Dugan’s score. Blind half to straddled Jaeger (some feet). Good bail, a touch close on her hecht shoot. Good DLO with some leg form and a hop. 9.725, a season high.

Aldridge (UNC): Yurchenko full, a little low but with a ton of distance. Has to pike down a bit and a hop. 9.725

Weiss (Pitt): Lots of amplitude on her Tkatchev, some feet. A little off center on her bail. Muscling these handstands a bit, but hitting her positions. Big DLO nearly stuck. 9.625

Solid starts for both teams and fairly tight scoring all around (such a breath of fresh air!). Neither team had significant technical issues, just lost points on landings and minor form breaks. UNC will want to rein in those vault landings sooner rather than later if they want to stay on top of the EAGL standings; those are valuable tenths that can make the difference in such a closely-matched conference.

Brechwald (Pitt): Tons of distance on her Yurchenko full. Twisted early and slightly off center. Soft legs and a small hop back. 9.650

Summey (UNC): Pretty straddled Jaeger caught a little close, good position on the bail. A bit shy on handstands, and is late on the full pirouette. Double tuck with a small hop. Good start for UNC. 9.650

Gneco (UNC): Blind change to beautiful straddled Jaeger. Rushes through the bail, way too close. Wonky and late pirouette, but a nice double tuck with a big step back. 9.125… Um, even with UTL deductions, not sure if that’s correct.

Ward (Pitt): Fabulous Yurchenko full, tiniest hop. A little preflight form, but great vault. 9.800 is a little low. Would have scored her between Robinson and Hislop.

So many judges conferences… Oh well, gives me time to type 😉

Petrikis (Pitt): Huge amplitude on her Yurchenko full. Twists really early (and off center?) and has to pike down and hop forward. 9.850 is way too high, sorry. Not the same level as Hislop’s or Ward’s.

Aldridge (UNC): Maloney with leg sep. Good bail, close on the hecht shoot. Really high FTDT, but lands on her knees. Too bad. 9.025

Herbine (Pitt): Yurchenko half looked really nice in the air but completes the twist late and has to take a large hop forward. 9.700

Donaghy (UNC): They didn’t show her routine, but she fell on a Jaeger per the commentators. Short bail, maybe tapped her toes? Great last handstand. Double lay with form, takes a seemingly unnecessary step. 8.825

Coulton (UNC): Saves a majorly overarched handstand. Shy on bail. Gets back on track, lovely full pirouette to between bar Tkatchev. High FTDT with a small bounce. Wow, great fight. 9.625

OK, really confused by some of these scores on both sides. Regardless, Pitt did very well on vault, showcasing their power and snagging a new season high. They’ll want to watch the blocks/early twists, which are forcing them to pike and/or land with less control. UNC UNCed on bars, although I’m still not sure what’s up with Gneco’s score. Also, there were entirely too many judges conferences; half the lineup got iced… Williams, as usual, did her thing beautifully.

Summey (UNC): Bhs los, solid. Very nice full turn. She’s being very deliberate and intentional with her movements, if not especially fluid. Beat to straddle 3/4, chest a little low, but good. Hitch kick to side somi. One and a half with a small hop. Strong start, wouldn’t be surprised if she beats her career high. 9.600, whatever.. Okay, they’ve changed it to a 9.650. Marginally better.

Oh. My. God. There’s a four tenth discrepancy on Summey’s routine, so Allen is having to wait. Again.

Christina agrees, there’ve been way too many judges’ conferences today, and we’re barely into the third rotation.

Allen (UNC): Very confident. Bhs loso, excellent. Switch split to straddle 1/4, beautiful. Hitch kick to side aerial and she comes off, too bad. Cartwheel to stuck gainer full. Such a nice routine other than the fall. 8.800

Herbine (Pitt): Front lay to floaty front full. Wolf full, good. Switch side to Popa, nice amplitude. Ugh, big double tuck that she lands crunched over on. Has to put a hand down. 9.150

Nam (UNC): Bhs loso looked a little off, but no wobbles. Pretty split series. Hitch kick to side aerial with a tiny leg up check. One and a half dismount with the tiniest scoot back. Clutch. 9.725

Ward (Pitt): Wolf 1.5, great. Front full to front lay, bounces out a bit. Switch ring good, a little shy on the switch half. Ouch, got hung up on her double tuck and lands curled up on the floor but pops up immediately. 8.925

Hislop (UNC): Lovely front aerial to back tuck. Beat to double stag, slightest waver but great cover. Switch split to split, perfect. Full turn, great. Her wrist and finger extension is gorgeous. Side aerial to full stuck but with a bend at the hip. 9.800

Bochenek (PItt): Punch Rudi, bounces out. A little shy on her switch full and full 1.5. Love her energy and engagement. One and a half to front lay, well done. Pitt needed that. 9.700

Coulton (UNC): Bhs loso, flawless. Switch split to straddle 1/4, lovely. Front aerial and misses her foot but saves it. Beautiful flexibility in her low beam work. Cat leap to switch side, good. Side aerial to stuck full. Other than the hiccup on the front aerial, great job. 9.825

Donaghy (UNC): Bhs loso, some form, but solid. Love the tuck 3/4. A slight wobble after the full turn. Cat leap to side aerial, a little tentative. Double stag leap wasn’t quite there. Stuck piked gainer, a little off center. A few things to take, but a serviceable routine. 9.650

Burton (Pitt): Double tuck drops out of the sky. Apologies, my stream glitched so I missed the middle pass. Really fun choreo. Crunches her double pike, too bad. 9.650

The Tar Heels were able to make up some ground thanks to a solid beam rotation. There were some errors, but they stayed focus and didn’t get rattled. Unfortunately, Pitt had a rough floor rotation. Most of the lineup seemed to struggle with endurance, having significant issues on the last passes (even Burton). Today’s score is over a point lower than their season high, though, so hopefully just a fluke; they’ve got some great skills and routines.

Antinori (UNC): Front through to double back. A bit short, but good. Little off on wolf full. Split leap is good. Good double pike to close. 9.750

Ceccarini (Pitt): Really cool mount. Walks out of the full turn, clever cover. Bhs loso, fights to stay on. Switch split to straddle slight waver, straddle half; may not get the connection, but nice fight. Front toss with legs up, somehow stays on. Stuck gainer pike. Won’t be a great score because of all the wobbles, but really impressive toughness. 8.900

Dean (UNC): It’s a Queen mashup, so I’m already calling for a 10. Front tuck through to double pike, fantastic. Switch side to Popa, really dynamic. One and a half to front pike, a little out of control on the landing, but not bad. Double tuck with a slide back to finish. Great routine. 9.750

For the record, Christina, I thought your Queen of Gymnastics joke was excellent. In fact, I was about to type the same thing…

Robatin (Pitt): Front toss with a leg up. Redoes to connect to a bhs, good. Beat to straddle half, a touch shy but steady. Cat leap to a Liukin, really cool. Really cool punch tucked front full, stuck. 9.500

Nam (UNC): Stumbles out of her double pike. Punch Rudi (or was it a double front?), well done. Switch full to wolf full, good positions. One and a half to front full, soft legs, but good control. Great routine. 9.800

Liszewski (Pitt): Bhs loso with a large hip and arm wave, but saves it. Cat leap to shy straddle 1/4. Pike to back tuck, great! Love the variety of skills this team is showing. Side somi, really wobbly but she saves it well. Great cartwheel to stuck gainer full. Clutch for the freshman who joined last month. 9.450

Robinson (UNC): Whip to double tuck, soars. Fhs full lay, looks so easy. Popa series then drops the straddle to the ground, good lord… Her straddle looks like a Tkatchev. HUGE double pike with a front foot up to close. So good. 9.875

Burton (Pitt): Front aerial, lovely. Powerful bhs loso (yes, powerful). Split with an arm wave. Redoes and connects to a sheep, fine for what it is. Gainer full with a tiny step. 9.725

Wow, did not expect the Tar Heels to come back that hard after the disastrous bars rotation. Way to rally and pull out the win! Their floor rotation was excellent, really polished and energetic (also, a season high 49.150). Pitt deserves major props for powering through a tough beam rotation. They’ve got a great arsenal of skills, and–even with the errors–showed a lot of guts and tenacity that should serve them well this season.