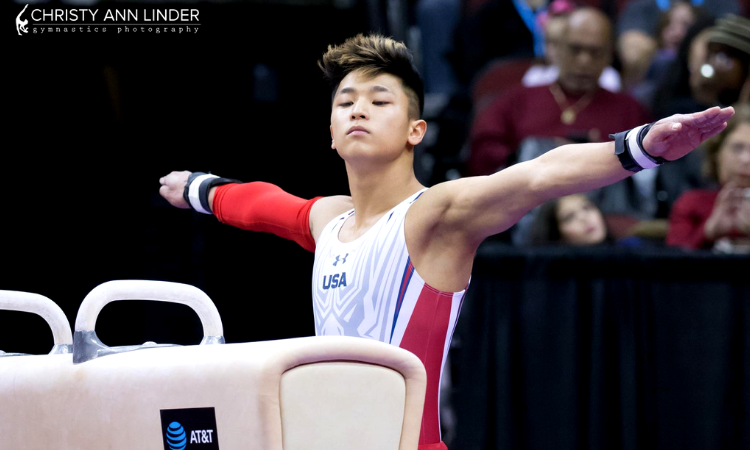 The final collegiate meet of the year is upon us, and we have six teams ready to duke it out for an NCAA title. Advancing from yesterday’s first session are Michigan, Stanford, and Nebraska, and out of yesterday’s evening session are Oklahoma, Illinois, and Penn State.

Michigan cruised to the title in the early session yesterday, missing only a few routines but still having room for improvement. Stanford didn’t have it’s ideal day, but still easily advanced and looked to have plenty left in the tank for tonight. Nebraska is competing here tonight thanks to its upset of Minnesota, who had a rough go in qualifying. If Nebraska can perform like it did yesterday, it could be a real threat to a handful of these teams tonight.

Oklahoma had a great performance in yesterday’s evening session, and that was with Yul Moldauer resting on three events. The Sooners were the only team to hit 70 on four events, and were only a few points away from doing so on pommel horse and high bar as well. Illinois started off a bit rough on parallel bars, but immediately bounced back by posting the highest high bar total of the day, and it was smooth sailing from there. Penn State found itself in fifth heading into the fifth rotation last night, but hit all five of its rings routines to rise back into qualifying position after Ohio State nor Iowa could keep leads on the NIttany Lions.

Check out yesterday’s Session One and Session Two live blogs for the full recap of the action.

The Sooners are the favorite to lift the team trophy tonight, as they have been all season. They have been able to not only bring the heavy difficulty all season, but have proven themselves worth of having the execution to match. That combination has been unbeatable for four years, and could see them lift their fifth consecutive title.

The rest of the podium is up for grabs. Based on scores from yesterday, Illinois looks capable of grabbing the second spot, but Michigan and Stanford were also impressive. The Wolverines are in their first team final since 2015, so landing a spot in the top three would be a welcome sight. The Cardinal, like Oklahoma, looked to be resting some athletes on events yesterday in preparation for tonight, so look for Stanford to have an even better day than what we saw in qualifying.

In addition to the team title, all around and event titles are also up for grabs. Oklahoma’s Moldauer is hoping to win his third all around title, and could potentially factor onto the podium on any of the six events as well. The pommel horse title will likely be the most contested final, with Moldauer, Illinois’ Michael Paradise, Penn State’s Stephen Nedoroscik, and Ohio State’s Alec Yoder all legit contenders for the win. Paradise posted the highest score on the event yesterday by three tenths, so it’s currently the Illini’s title to lose.

The teams will rotate in Olympic order, with Oklahoma starting on floor, Michigan starting on pommel horse, Nebraska starting on rings, Stanford starting on vault, Illinois starting on parallel bars, and Penn State starting on high bar. Individual all arounders and event finalists will be rotating along with tonight’s six teams and go first in each rotation.

Follow along with live scores of video courtesy of the Big Ten Network.

We’ve got a pretty decent sized crowd here tonight. The largest contingent is obviously for the home-team Illini, but Michigan, Stanford, and Oklahoma all have a good amount of fan and parent support here as well.

Lewis (Springfield): tsuk 2.5, went for the upgrade from a double but comes in short and falls backwards. 13.233

A hit for Michigan to start on pommel horse.

Guimaraes (OU): double double, slides back, whip half to double full, small hop, double arabian half out, stuck, 2.5 to stuck layout half, some good flair work before a split and press to handstand, done easily, side pass is a rudi, almost stuck, small foot slide, dismounts with a triple full, tiny tiny hop. 14.000

Stephenson (Neb): good straddle planche, moves well to a straddle sit and back to a planche, good line in his giants, solid front giants, a bit of flexed feet in tucked and piked yamawakis, dismounts double double, stuck! 14.033

Burns and Zakutney on high bar after a big mistake in an earlier routine.

Stanford rocked that vault rotation to open and get the early lead as a reward. Moldauer’s fall on floor, not even tumbling, was a huge shock and keeps Oklahoma’s score below a 70 on an event the Sooners went 70+ on yesterday. Nebraska started very well on rings with five clean routines and getting a 14 from Stephenson. Michigan had a miss on pommel horse but that isn’t the end of the road, but makes it all that harder now. Penn State went 3/5 on high bar, while Illinois had a disaster of a start on parallel bars. That’s where the Illini faltered early yesterday and came back strong, but today’s parallel bars performance was worse and today it will be a lot harder to dig out of a hole.

Yoder (OSU): this could be a title winning routine, opens with some good scissor work and moves quickly into some nice one-armed swings, great body extension, clips one leg and breaks form slightly but stays on, regained composure really well, great press to handstand and dismount, just that small break in the middle. 14.633

Zakutney falls on floor for Penn State and Breckenridge comes off parallel bars for Stanford. Dunning hits a rings set for Michigan.

Bock (Mich): nice crosses to open, nicely through to a maltese, good straddle planche, small arch in a front giant, tucked to piked yamawakis, up to straddle sit, presses to handstand, dismounts double double, big squat and a hop to the side. 13.633

Nebraska brought it on vault, and if it keeps this up the Huskers could land on the podium. Stanford still managed a good score on parallel bars despite a few mistakes, and Oklahoma sailed through pommel horse. Illinois didn’t get as much out of high bar as it did yesterday, while Michigan is back to cruising and put a good rotation together on rings. Penn State had a solid floor rotation going until Zakutney fell in the anchor spot and missed out on a few points.

Gliozzi (W&M): opens with scissors right into a press handstand, comes down cleanly into swinging, some flexed feet throughout his circles, traveling well, moving smoothly, getting a bit piked the more he goes, dismounts for a hit routine. 13.333

Justus (OU): nice crosses to start, nice back uprise to maltese, good straddle planche, a bit of swing in a giant, good yamawakis, dismounts full twisting double layout, pikes it down and hops back. 13.500

A fall from Stanford on high bar.

Wiskus hits a parallel bars routine to keep his strong all around going. 14.200

Fletcher (Ill): nice swinging to start, good circles, traveling well, quick up to handstand and hits a good one.

Anderson (OU): tsuk double, cowboys the pike and hops OOB on the landing. 14.666

Perla just stuck nearly every pass on floor for Stanford.

Fall for Nebraska on high bar.

Paradise (Ill): he posted the highest pommel horse score yesterday, scissors to open and cleanly into his swings, great one-armed swing, good extension, pointed toes, traveling well, doesn’t quite get all the way up to handstand before the dismount. 13.900

This has come down mostly to Oklahoma and Stanford now. The Sooners have already grabbed the lead before Stanford heads to the low-scoring pommel horse, but still has high bar left. This should be very exciting.

Fall from the leadoff for Penn State on vault.

Gunther (Stan): up to handstand then down into scissors, does it again cleanly, nice swinging, good circles, working through cleanly, dismounts strong.

Hudson (Ill): nice maltese, nice uprise back to maltese, good yamawakis to L-sit, a bit of a struggle in press to handstand, dismounts full-in and a step back. 13.466

Moldauer (OU): L-sit to open, nice press to handstand, great healy, tiny bit short on a peach, misses his hand on a peach half and hits the bar, rebounds well with a diamidov, nice release, tucked and piked, dismounts front double half, great kick out to a stick. 13.133

This is getting close! With Moldauer’s two mistakes, the Sooners don’t have as big of a lead over Stanford as they could have, and have to finish on the ever-tricky high bar where the Cardinal are finishing on rings. Nebraska having to finish on pommel horse means its third place standing isn’t solid and really Penn State or Michigan could grab that spot. Also, Malone is currently leading the all around, followed by Wiskus and then its Moldauer, so the all around race will be very exciting in this last rotation too!

Wiskus steps OOB on his final floor pass, will probably affect his all around standing in not a good way unfortunately.

Stanford is killing it so far on rings! Oklahoma just getting underway now on high bar.

Moldauer (OU): yamawaki, nice endo out, good one-armed giants, tak half a bit short, kovacs and tries to grab under the bar and misses, re-chalks and re-mounts, hop full, hop 1.5, dismounts full twisting double layout and a slide back. 12.066

Another hit routine and stuck dismount for Stanford!! The Cardinal are bringing the heat! Nebraska is killing horse too!

Eng (Stan): great holds to start, beautiful into a maltese and then cross, nice uprise to handstand, straddle hold done well, great maltese up to planche, loses control a bit in the final handstand, double layout dismount, brings chest down and has to hop. 14.133

So quiet in here waiting for Anderson’s score.

What a thrilling ending! Stanford used the highest rings total of the day to take advantage of a Sooners miss on high bar and take the title! Oklahoma does not five-peat and its streak ends at three undefeated seasons (four regular seasons through, still amazing!). Nebraska killed it on pommels to finish third after entering ranked ninth!

I’ll post full team results and event winners below, and check out The Dismount: MAG in a few days for my full recap of these NCAA Championships! It was a great year and I’m glad I got to live blog it here on College Gym News! 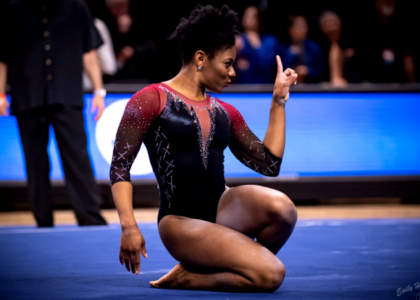 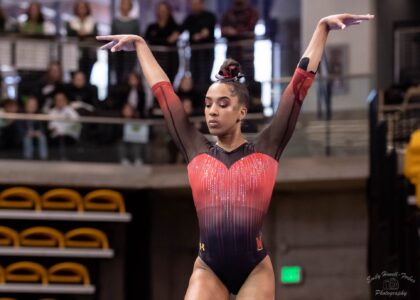