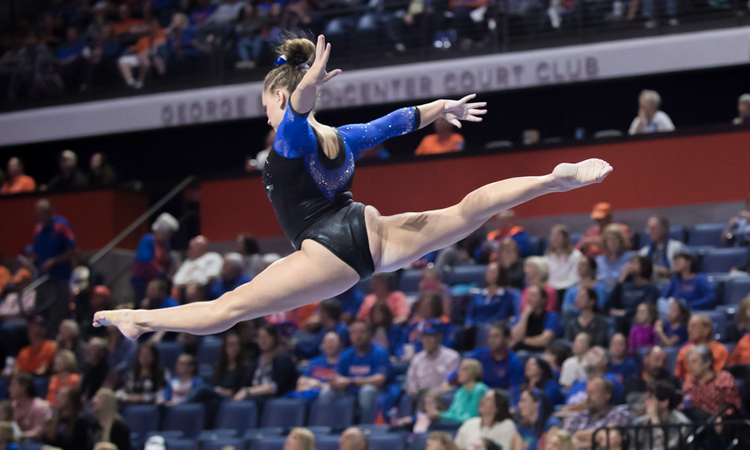 It’s a big week for exciting SEC matchups this weekend with a couple of absolutely can’t-miss meets Friday night. But the SEC isn’t hogging all the TV time as the Pac-12 truly opens conference competition with its most exciting meets slated for Monday.

Why You Should Cancel Plans For It: The reigning SEC champions will go up against a team that many a fan has said will take that title and more this year. In what could be a preview for that matchup in March, the Florida Gators and LSU Tigers will engage in what’s sure to be the most legitimate tossup of the weekend in Baton Rouge, even more so after the questions that linger from LSU’s setbacks in the past two weeks. If Florida comes out on top, it will be LSU’s first home loss since 2014. Need we say more? This a must-watch meet.

What Else You Should Know Before Tuning In: It’s unknown how much action we will see from Florida sophomore Alyssa Baumann, who didn’t compete last week after a bars fall in practice. Similarly, LSU redshirt junior McKenna Kelley had another setback last week after only just returning from injury; she had a minor ankle injury and her participation is also to be determined.

Why You Should Cancel Plans For It: This decades-old SEC rivalry takes on a whole new meaning tonight. Alabama’s season hasn’t had the most ideal start, so the Crimson Tide will need to bring its best effort to combat a surging Georgia squad in away territory. This meet has the potential to rank up there with LSU/Florida in terms of competitiveness.

What Else You Should Know Before Tuning In: The rivalry between these teams has been more understated in years past, but to fully appreciate the legacy behind it, here’s one of our screencap recaps from their meeting back in 2009 (when Courtney Kupets was one of the gymnasts competing). It’s a big deal! On a more practical note relating to injuries, Alabama sophomore Bailie Key is out for the season after surgery shortly before the season began. Georgia freshman Megan Roberts will not compete all her events for at least another week but is tentatively in the bars lineup. Her teammate Sterlyn Austin is also likely out for the season.

Why You Should Cancel Plans For It: It’s our first MRGC matchup of 2019! The rankings may seem a little bit lopsided right now, but the Thunderbirds had a rough first meet. Southern Utah has the talent to go up against the reigning conference champion. Its strong freshman class will lead the way while Boise State features exciting gymnasts like Courtney McGregor and Shani Remme. If both teams hit to their full capability, this will be one exciting meet to watch and will surely give us an early preview of what’s in store later in the season.

What Else You Should Know Before Tuning In: It’s both teams’ second meet of the season. The Broncos relied mostly on veteran presence in the lineups, so it’ll be interesting to see if that becomes a trend throughout the season or if more freshmen are introduced into the lineups throughout the year. The strategy clearly paid off in the first meet. Southern Utah’s power freshman class looks to continue its development throughout the season.

Why You Should See the Error of Your Ways: This will be the first Ivy League matchup of the season for both teams. Yale just recorded the highest opening score in its program’s history this past weekend and is looking to build on that performance. Penn got off to a bit of a rough start, but has a lot of potential on both bars and beam.

Why You Should See the Error of Your Ways: This is a great matchup of nearly half of the MAC conference. Western Michigan shot out to a superb start, but Northern Illinois and Eastern Michigan are not to be counted out. This meet could have conference standing implications that last weeks.

Why You Should Clear Space on Your DVR: Oklahoma. It’s a gymnastics powerhouse. That’s the main reason you’ll want to catch this meet. Beyond that, North Carolina has some amazing gymnasts and has seen improvements in its program over the past few seasons. Ball State doesn’t have the name recognition, but you’ll want to catch it on bars and floor.

Why You Should Clear Space on Your DVR: It’s a NorCal Pac-12 showdown you don’t want to miss! California is a team on the rise and could very well contend for a spot at nationals this season. Stanford is, well, Stanford. You never quite know what you’re getting into when you choose to watch a Stanford meet, which makes it all the more exciting.

READ THIS NEXT: The Mount: Week Three MAG