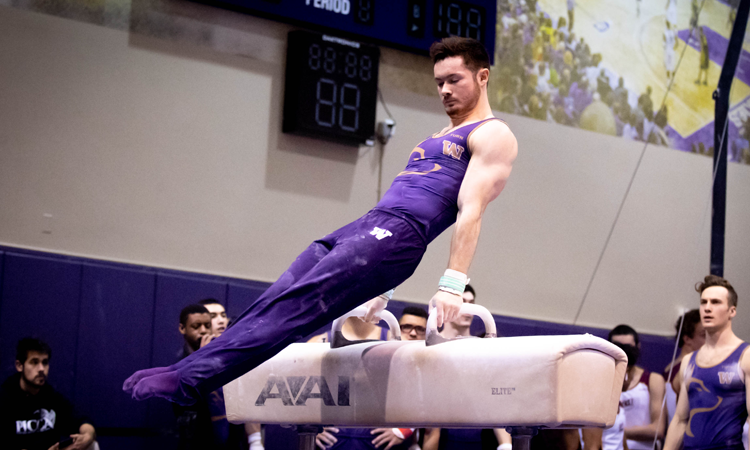 Saturday will be a busy day of men’s gymnastics, with 19 of the 21 programs in action. Top-ranked Stanford will aim for another huge score to exclaim that it’s the team that will be able to unseed Oklahoma while most of the Big Ten will battle it out in Chicago at the annual Windy City Invite. Penn State heads to Army for the second weekend in a row to try and continue its hot start to the season, and fellow armed forces school Navy is hosting an intriguing quad meet. Last but not least, Arizona State’s Maroon Team is making its season debut when it travels north to take on SC United.

Why You Should Cancel Plans For It: The Windy City invite is known as one of the most exciting and competitive meets of the season, and this year’s edition should be no exception. Illinois and Minnesota, separated by only 0.650 in the rankings, will battle for the team title while Michigan and Iowa try and spoil the party in their season debuts. Host UIC will look to impress in what may be its final Windy City Invite while trying to surpass Washington, who opened its season at home two weeks ago. Current and former national team members Cameron Bock of Michigan and Shane Wiskus of Minnesota should provide an excellent all around race, and event specialists like Alex Diab of Illinois and Jacob Moore of Michigan will put on a show for event titles.

What Else You Should Know Before Tuning In: In 2018, the UIC athletics department announced it would be cutting the men’s and women’s gymnastics programs. Unfortunately, this means that the 2019 season may be the final one for the programs. But that has not stopped the gymternet from trying to save them. Learn more about what you can do, and sign the petition to help the future of UIC gymnastics.

Why You Should Cancel Plans For It: This meet is just as much about Oklahoma needing a big score to try and reclaim the No. 1 ranking as it is Air Force and Arizona State jousting for second. Arizona State got the best of Air Force last weekend with the return of Kiwan Watts, but the threat of repeating the performance from week two makes Air Force a contender. Oklahoma, with superstar Yul Moldauer only competing two events last weekend, is certainly capable of increasing its team total, but head coach Mark Williams has been cautious putting Moldauer in the all around in an effort to keep him healthy for the entire season. Maybe we will get to see an all around performance from Moldauer in front of the Sooners’ home crowd.

What Else You Should Know Before Tuning In: A member of the U.S. national team, Moldauer was recently named one of two men to compete for the U.S. at the American Cup held on March 2nd, in Greensboro, North Carolina.

Why You Should See the Error of Your Ways: Although it doesn’t have the high profile teams, this meet should be one of the most competitive of the weekend. Navy bested the three other teams last weekend at the West Point Open, but when it came to individual finals success, the field was relatively even. Although Temple didn’t record a competitive team score last weekend, the expected debut of two additional gymnasts at this meet should elevate the Owls’ team score that already surpassed all of their scores from the 2018 season.

Stanford Open with No. 9 California and No. 19 NorCal United at No. 1 Stanford

Why You Should Clear Space on Your DVR: This is the second of seven regular season meetings between rivals California and Stanford, with Stanford winning the first matchup last weekend in Berkeley. While Stanford won’t be challenged in the team competition, the Cardinal will look to post a big score at home to try and maintain its No. 1 ranking. California, too, will be looking to post a high score in hopes of remaining in the nation’s top 10 while NorCal United’s team of four will be aiming to steal some podium finishes from the favored NCAA programs.

Why You Should Clear Space on Your DVR: Army and Penn State surprised everyone last weekend with their performances and are both ranked five spots higher than their preseason rankings. Penn State should win easily and will try to outpace the scores from the other Big Ten teams competing in Chicago later Saturday night while junior Sam Zakutney aims to maintain his top rank in the all around. Army was overtaken in the last rotation by conference rival Navy at home last weekend, so the Black Nights, led by senior Cole Casanova, will hope to bounce back from that performance.

READ THIS NEXT: The Mount: Week Three WAG