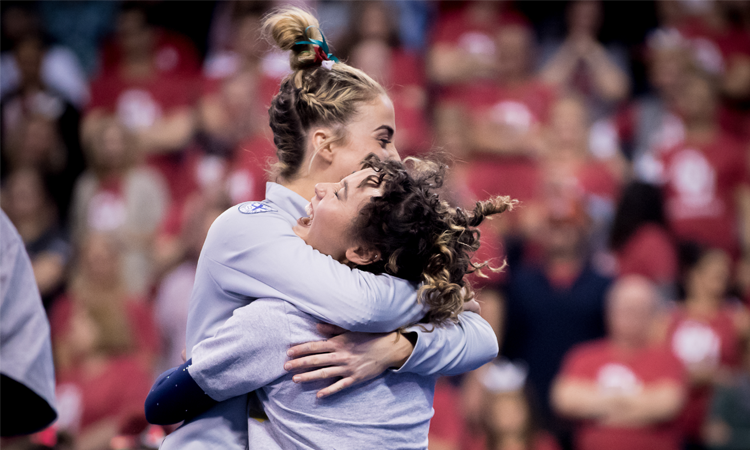 If you prefer having a life and don’t want to spend your weekends glued to the couch, only getting up for bathroom breaks and to refresh the chips and dip—by the way, who are you—this is the list for you. Block out your calendar, cancel your plans and make sure you don’t miss these 17 matchups in 2019. You won’t regret it. Trust us.

The WCGA preseason coaches poll placed Ohio State at No. 18 and N.C. State at No. 25, but the teams finished 2018 at Nos. 18 and 20, respectively. On January 12, these two teams on the rise, both with coaches entering their sophomore seasons, will go head to head in Raleigh. Will both teams continue to rise? Who will take this early season victory? It’s not unreasonable to think that these teams will see each other again at regionals.

January 12 is a busy night. The Gym Dawgs head to Lincoln to do battle with the Huskers in a preview of what could be a fight for a place at nationals. Washington has spent the past few years proving it belongs in postseason conversations, while Nebraska is a team that tends to underperform during season and then always finds a way to the biggest stage. Getting an early peek at these teams head to head is a treat.

January 12 will be our first look at Ursinus and RIC under new head coaches Kim Valenti and Monica Mesalles Nassi, respectively. Nassi specifically said one of her biggest goals for the team is for it to start of the season stronger than any other year, so this will be an important afternoon. Brockport is perpetually one of the top teams in the NCGA East, so Springfield and Ursinus will be looking to prove they can hold their own against the Golden Eagles.

Best of Minnesota—Gustavus, Hamline and Winona at Minnesota

Though not big meet for the Gophers, January 12 will be an exciting night for the three DIII teams from Minnesota. After uncharacteristic finishes at the conference championship for all three teams, Gustavus and Hamline will be hoping to show they were able to continue building on their incredible finishes last season while Winona State will be looking for redemption. Don’t miss what could end up being a fierce fight between these three teams.

There’s so many factors going into this meet that should make you more excited for it than you have been in years. The meet, held on January 18, will come just over a month since head coach Courtney Kupets Carter had her third child, and we’re fully expecting Suzanne Yoculan Leebern to take over the program until CKC is fit to return. But no matter who leads the Gymdogs into Stegeman for this meet, it’s bound to be a thrilling night. Georgia shocked Alabama at NCAA semifinals in 2018 and the regular season matchup has been going back and forth for years. It’s really anyone’s guess what the outcome will be in 2019.

Boise State has really been the team to beat for the last few years in the MRGC, narrowly missing out on nationals qualification those years as well. But things could change in 2019, giving fans a preview of the shake-down, drag-out meet the conference championship might be. And we don’t have to wait for March 22 to get the goods as the Thunderbirds and Broncos meet up twice during the regular season, January 18 in Cedar City, Utah, and January 25 in Boise.

The annual Windy City Invite, hosted by UIC, is always a great early season meet to watch. This January 19 Illinois, Iowa, Michigan, Minnesota and Washington will all head to Chicago and get a taste of a post-season esque competition just three weeks into the year. Unfortunately, without a certain future for the UIC programs, this may also be the final Windy City Invite, so make sure to add it to your list in 2019.

We know, but stay with us. New Hampshire landed itself on the WCGA preseason coaches poll at No. 34, and Yale is a team you should be keeping an eye on, with strong returners and an impressive incoming class. When these two teams clash on January 27, you won’t want to miss it. Yale goes up against some big out of conference opponents this year, and could stun several. Catch these teams twice, when Yale visits New Hampshire on March 8.

Air Force and UW-La Crosse opened their seasons against each other last year, and what could have been a blowout actually turned into a pretty great meet! These teams meet again on February 1 and have added in reigning DIII national champion UW-Whitewater—an addition that will spice things up even more. Though Air Force will likely come out on top, UWL and UWW will be looking to prove they can keep it close and will surely have a great battle for second.

Mark February 17 on your calendar right now. We’ll wait. Finished? OK, good. Now let us explain why. TWU and LU have gone back and forth for years, both during the regular season and during postseason, fighting over the top spot in not only the conference but the USAG standings as well. TWU won the last two national titles and the record between the teams comes out at LU with eight “wins” over TWU to TWU’s seven (since Lindenwood’s team was formed in 2013). If there’s a closer matchup between under-the-radar teams, we don’t know of one.

This MIC/MAC matchup on February 24 at UIC’s Dorin Forum may very well be the women’s last ever home meet as an NCAA team. Don’t miss what could be your last chance to see the Flames at home, and keep an eye on what is a preview to half of the State of Illinois meet on March 9.

Last year the Wolverines closed their home season by upsetting Utah in front of a record-setting Crisler Center crowd. On March 2, we get a repeat of the matchup, but this time it’s on the Utes’ turf. Which of these teams will come out on top?

Minnesota and Stanford at Illinois (MAG)

Last season, these three teams finished second, third and fourth at NCAAs and are coming into the 2019 season ranked in those positions as well—with Stanford No. 2, Illinois No. 3 and Minnesota No. 4. This meet on March 2 will be competitive and will give us some insight as to what to expect from these teams when they meet again a month later at the NCAA championships, as well as who could be the team to stop Oklahoma’s championship streak.

Last year’s Oklahoma at UCLA meet was one for the ages and just might be one of our favorite college gymnastics competition of all time. March 3, 2019 will be no different and perhaps even more exciting. It’s Miss Val’s last season, the Bruins are the the reigning national champs, it’s at Oklahoma, it’ll be broadcast on the real ESPN (with Bart! and Kathy!), scores will be high, 10s will be flying. What more could you ask for?

Oklahoma is the defending national champion—for multiple years—and we think Illinois is a team poised to at least put up a fight against the Sooners. So this meeting on March 9 in Norman is one you don’t want to miss.

It’s Miss Val’s last home meet. We’re already crying. But there’s an extra layer of special as one of her former pupils comes back as the head coach of Utah State in Amy Smith. You know March 16 is going to be a full-out party, and you don’t want to miss it. 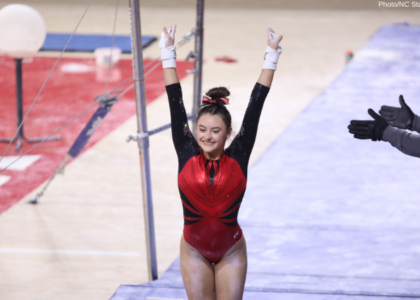